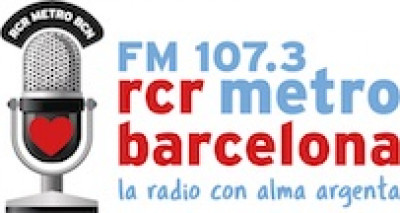 RCR Metro Barcelona FM 107.3 (www.rcrbarcelona.com) is a Radio FM Televised Online founded in September 2017. It was born from the program called Building Relationships whose theme included human relations and personal growth. Its driver Rudolf Helmbrecht becomes the Founder and CEO of RCR Metro Barcelona (Radio Constructing Relationships Metro Barcelona). He is an Argentinean-German, native of Cordoba, who has been in Europe for almost 40 years. In this way, the station adopts the name of the program that originates it: “Building Relationships”; following a thematic radio modality televised online. Over time, he was surrounded by a team of mainly Argentine professionals who ended up adding the slogan “La Radio con Alma Argenta”. Argentinity as identity emerges and takes force in October 2019, with the start of the “Gauchadas” program. A sort of weekly cultural magazine designed for Argentines living abroad. He was led by journalist Agustin “Tachi” Alvarez, who belonged to the Communication Team of the Presidency of the Argentine Nation, who has extensive university training and experience as a journalist, producer and audiovisual director. Currently Gauchadas has managed to mark quality in its programming, and be followed from many countries both by audio and video streaming; also by antenna from the FM 107.3 dial in Barcelona. His success was bringing more compatriots closer to radio and encouraging identification as “La Radio Argenta” in Spain.
Author Networks:

Cadena 3 and RCR Barcelona tell us stories about Argentines around the world Author: RCR Metro Barcelona

Start “The Biggest Chain” with the stories behind our listeners around the wo...

Julio Cruz: “It is a pride to be able to dress the colors of your nation” Author: RCR Metro Barcelona

In this exclusive interview, the former player reviews the football milestone...

Javier Zanetti: “It was a pride to share some moments with Maradona” Author: RCR Metro Barcelona

An exclusive interview with Javier Zanetti, in which he reviews anecdotes wit...