The celebration was framed in the Buenos Aires Government's BA Celebra Irlanda proposal. 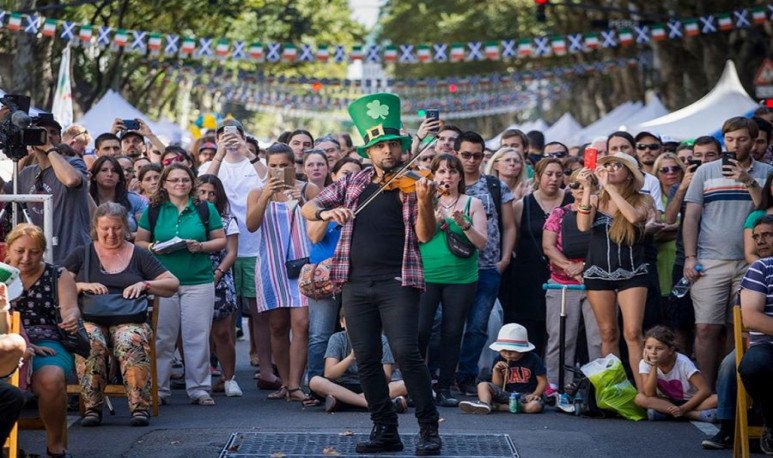 Thousands of people celebrated on Sunday on Avenida de Mayo the feast of St. Patrick, the traditional Irish celebration, which featured the parade of typical Celtic music orchestras and more than 50 stands that offered typical products and meals from the European country.

Through BA Celebrates Ireland, the Buenos Aires government organized the representative celebration of that community to remember the death of Saint Patrick, the patron saint of Ireland who died on 17 March 461.
“ Each BaceBeBebra renews the possibility of highlighting the importance of our City's diversity and cultural pluralism. Today, as every year we accompany the Irish community to share, spread and promote all the cultural richness of the community,” Pamela Malewicz, Undersecretary for Human Rights and Pluralism, Télam assured Telam.
For the celebration, a stage was set on Plaza de Mayo where a tribute band played to U2, while the stands, which were distributed on both sides of Avenida de Mayo, sold typical dishes, books, goblins and clothing, among other allusive objects.

Both adults and children were dressed in green, painted faces and goblin hats.
“ The truth is that the celebration is beautiful, the food is very good and it is a family atmosphere,” said Fabian, who came from Ramos Mejía with his wife Ileana to participate in the celebration.
Padraig, an Irishman who was on a walk through Buenos Aires, told Telam that “I did not expect to find such a big celebration.”
“ It's very good. I like how they reproduce Irish culture here in Argentina, there are very good typical bands with their traditional dresses,” he praised and commented that in his country for San Patricio “people dress up and go out to watch the parade as a family, you feel proud to be Irish.”
The San Patricio Parade, which turned 11 years in the City, began after 15 in Piedras y Avenida de Mayo with the band of the Patricios Regiment, the City Police and several orchestras typical of Celtic music, where the use of bagpipes stood out.
Hector, member of the band SAPA, a group of Irish bagpipes and drums, said that “it is very good to be able to show Celtic culture, perhaps many people don't know it.”
“ People are coming and having fun, and artists can show what we do,” he added.
Saint Patrick is a Christian holiday celebrated annually on 17 March to commemorate the death of the patron saint of the whole island of Ireland.

Initially it began as a religious celebration, but since 1996 a festival has been held in Dublin and other cities around the world, which can last up to five days in the Irish capital.
“ The celebration is magnificent, more and more people are coming and growing year by year,” said Jorge Mackey, president of the Argentine Irish Association, adding that “it is a great celebration for Buenos Aires and for the descendants of the community.”
“ It is a holiday that gathers many people, because it is a saint who was very popular because he did not evangelize with the cross, but with love and fellowship,” Mackey said.
Adrián Varela, director of communities of the Buenos Aires government, said that “celebrating San Patricio is a way to strengthen ties with the communities with the City.”
“ It is a celebration enjoyed by all Buenos Aires because it is a very old community and its influence on the idiosyncrasy of the City is very important,” he concluded.

Let's rediscover the pleasure of books

MujerTrova heads the 33rd opening of the Mataderos Fair on Sunday