Home Argentine Traditions With a lot of culture and tradition, he spent the Harvest 2020

Last weekend the most important celebrations of the Harvest 2020 took place. Via Blanca, Carousel and Central Act, a cultural tradition. 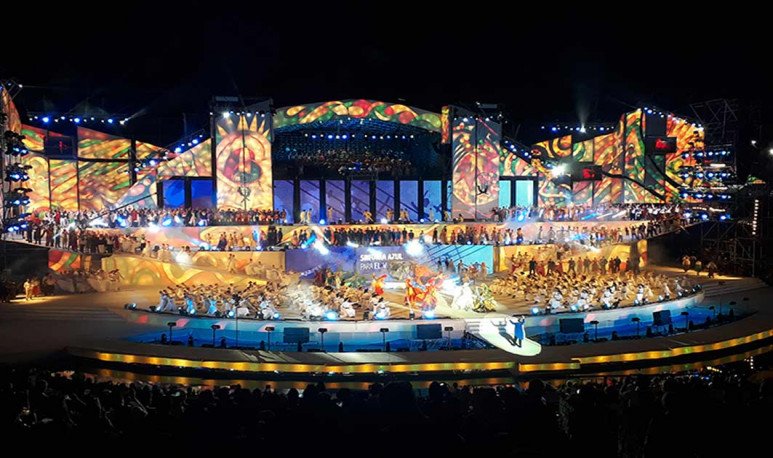 He spent the first weekend of March and, with it, Harvest 2020.  We Mendoza are proud and satisfied with the show that was provided , always highlighting Cuyana culture and tradition. We'll have to wait another year. But for now,  the 84 who have passed have delivered a vintage that evolves permanently.

Official presentation of queens. In their  allegorical chariots , the sovereigns walk through the streets of the City. You know the real protagonists.  On Friday night, the cars of each of the departments that participated in the Harvest 2020 traveled the streets. As is customary, each is characterized and set in allusion to the agricultural production that distinguishes each municipality. Grapes, apples, peaches, water, solar panels and plastic bottles.  From agriculture to sustainability, everything could be seen in those who were real animated trucks. Of course, in the center and on top of each car, the departmental  queen  was escorted by the court.  That is, the queens of each  district  who could not keep the crown of their municipality.

More of the same, but longer and more familiar.  The Carousel proposes something similar to the Via Blanca, except that it takes place on Saturday morning, with the heat that this implies . Above, it is longer because social organizations tend to march that seek to make certain claims visible. In addition, gauchas and traditionalist organizations also have their space in this parade. The journey becomes eternal.

Until the main course arrives.  On Saturday, the doors of the Greek theatre Frank Romero Day opened at 18.  Mendocinos and tourists arrived early, they didn't want to miss anything from the  Harvest . It is that, although the act began at 22, there was, from 20, an entertaining previous animated by announcers. The public won different awards, among them, a car 0 kilometer.

At 22 o'clock began “ Blue Symphony  for New Wine”, the work of Golondrina Ruiz. A video projected on LED screens showed close-ups of the director, actor, costumer and dozens of cultural doers who subscribed to the show.  There were more than 10 paintings where the plot rambled in the imperative need that a conductor showed to find the blue note. That exact note, that generated the ecstasy of musical perfection, and thus be able to put melody to the wine that was yet to be born . With totally theatrical moments and atypical musical genres, the Harvest 2020 managed to show something different, which is always claimed. However, he had several unrelevant and boring episodes.

But criticism will remain for specialists.  Mendocino audiences  have enough to sound the malambo and the thousand artists appear on stage to accompany it.    If there is loud music, color and lights, the show is guaranteed. Again, the audience was dumped.