Home Argentine Traditions What is the story behind the Day of Our Lady of the Rosary?

The Virgin of the Rosary is an invocation of Mary venerated by the Catholic Church that is celebrated in October of each year. 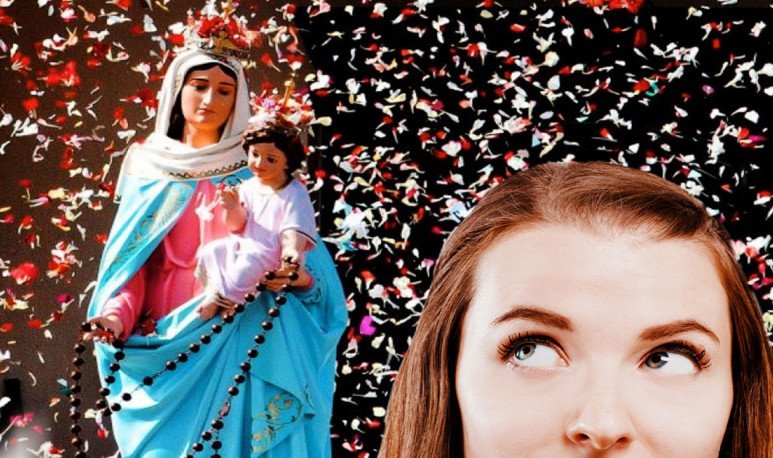 They say faith moves mountains. And there are not a few cities in the country that hold rituals around religion. In this case, we will talk about  the Virgin of the Rosary , who is  honored every  7 October . This 2020 was also not the exception, given that people organized themselves despite the difficult context we were going through. In  Paraná , for example,  a large caravan of cars was made with his image. In this way, hundreds and hundreds of faithful gathered  to accompany the 24 parishes  that make up their archdiocese.  She is the patron saint and founder of the  city , so the date does not go unnoticed .

Story with a tint of war

The Virgin of Rosario is Patroness of the Order of Preachers, Colombia, Guatemala, Ecuador and the Military Emergency Unit (EMU) of Spain. Its  legend , because there is no reliable historical base, dates back to 1208 . Then, the  Virgin Mary appeared to  Domingo de Guzmán , a Castilian priest. It all happened in a   chapel  in the monastery of Prouilhe, France , and she was wearing a rosary in her hands.  He also taught him to pray and told him to preach it among men . After the incredible event, Domingo showed it to the soldiers led by his friend Simon IV of Montfort. It was before the Battle of Muret, whose  victory   was finally attributed to the Virgin Mary.

In the  16th century ,  St. Pius V established its liturgical commemoration on 7 October. Also, that day was the anniversary of the victory at  the Battle of Lepanto . A date commemorating when Christian forces defeated the Turks who were invading Europe, calling her Our Lady of Victories.  His successor, Gregory XIII, changed the name of his holiday to Our Lady of the Rosary .

Our Lady of Lourdes, in her apparition in 1858, and that of Fatima in 1917, asked her seers to pray the rosary . In addition, John Paul II stated in 1978 that the rosary was his favorite prayer. While Pope Francis supported the declaration in 2016, assuring that the prayer also accompanied him in his life.

The Virgin of the Rosary and her relationship with Paraná

It is said that a group of villagers gathered around a humble chapel dedicated to this devotion. It was located in a place called " Deskada de Paraná” on the banks of the river. In  1730  a  parish  was created there. Francisco Arias Montiel, his first parish priest, propagated devotion, founded schools, pacified and converted the aborigines. In that instance, love for Our Lady represented a bond of unity and a factor of progress. He still does, though.

The successor, Francisco Álvarez, eager to appoint a patron saint of the city, decided to hold  a popular plebiscite . The choice was between  the Virgin of the Rosary, San Miguel Archangel and Santa Rosa de Lima . Finally,  on January 1, 1825  , it was determined by the people that the first would win that appointment. This fact allows us to get an idea of the importance attached to sponsorships and the impact it had on citizens.

On the other hand, the Virgin of the Rosary is linked to the history of  Paraná  and the province of Entre Ríos . In  1944 ,  Mgr. Guilland  consecrated the entire diocese to him, and then  Mgr. Tortol or solemnly crowned her as  Patroness of the city . Under this title, on  May 25, 1812  he presided over the first blessing of our  flag  . In fact, patriots such as Belgrano, Arenales and Güemes were among their devotees. However, its image is  venerated  in many corners of Argentina.  In this sense, provinces such as Jujuy, San Luis, San Juan, Mendoza and Santa Fe also retain this symbol of faith .