And, if Argentina is usual, every year the Tucumans approach the famous Christmas tree located in the pedestrian Mendoza and Muñecas to take pictures and remember the year lived. 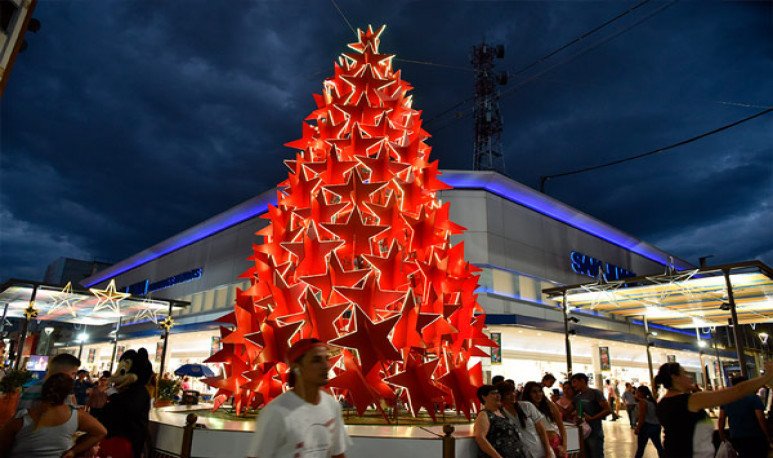 We are days away from celebrating Christmas, and the microcentro  tucumano , since November began to show in the stained glass windows of its business objects for decoration for the Christmas table, as well as the famous trees of a variety of varieties for every taste. As a regional Argentine custom, the Tucumanos has a traditional way of feeling that Christmas is coming, it is about taking pictures next to the famous Christmas tree on the main promenade of the tucumano trade.

At this time of year employees of the Municipality of San Miguel de Tucumán begin to assemble the Christmas tree that accompanies the Tucumans on these festive dates. Year after year, the Christmas ornament is located at the intersection of the pedestrian Mendoza and Muñecas. This is a giant  tree  covered with lights that are lit when night approaches. This ornament has become a traditional Christmas symbol of this province. Citizens circulate in this area buying Santa's gifts and, in turn, have time for a few minutes to stop and take a photo next to the tree.

The Christmas tree as a central figure in the shopping center, and located in a strategic place where thousands of Tucumans circulate there, has become a traditional way of expressing and representing that the year is coming to an end. Last year it was set up in mid-November and on social networks users said that it was very soon that the capital municipality put it together in that month, others had decided to approach the place where it is located to take the traditional photos of the end of the year.

But regardless of when it is armed, the truth is that, the Christmas tree of the pedestrian of the microcentro tucumano will realize once again that 2020 will end very soon and the desire for it is shared by many Tucumans, since it was an atypical year for all, where we had to cross a pandemic never seen. However, others will have had a perhaps favorable year, considering that in Tucumán many ventures have emerged as a business opportunity. But anyway, perhaps many agree that they do not see the time for this year to end and start with a more united  2021  , putting into practice the teaching that they leave andoacute; the pandemic in various sectors of Tucuman society.

In this context, currently the decoration houses, clothing shops and furniture premises give account of the festive climate in the center Tucumano, it was also possible to observe in the stained glass windows of the commercial premises tempting discounts, offers, or their 2x1 and 3x1 competing between a local and another if it is the same they offer. While year-end discounts are nothing new in Tucumán, since every year entrepreneurs in this sector apply it as a measure to sell even more and close the year with a rebound in sales, this 2020, the commercial sector is closing the year with more discounts than Normal, perhaps a measure taken by to be able to sell what was not sold in the course of the year because of the pandemic's stop. So these days you can see a microcentro tucumano convulsed by the number of passers-by who approach the premises, analyze prices, discounts and buy gifts that will be located soon under the trees of their homes.

As every year, in Tucumán, the infaltable Christmas tree decorates the landscape of the microcentro tucumano, a traditional ornament that marks the end of the year and also generates  nostalgia  in the town of Tucumano. The quintessential Christmas symbol has become a classic of the main shopping promenade, and the ornament is instead of the following statement: 2020 is leaving!

Undoubtedly, the Christmas tree located at the intersection of the pedestrian Mendoza and Muñecas is the focus of people's attraction, where the Tucumans who live in the capital of the province, as well as those in the interior approach to take pictures to send a loved one from another province or just to save the image as a souvenir of the year lived. Selfie is the most used technique but also those of complete planes so that you can appreciate the size of the tree structure, which is shaped like a pine of stars with red lights that shine by the  night .