During the month of August, the village of Casabindo celebrates its tradition Toreo de la Vincha in homage to the Virgin of the Assumption. 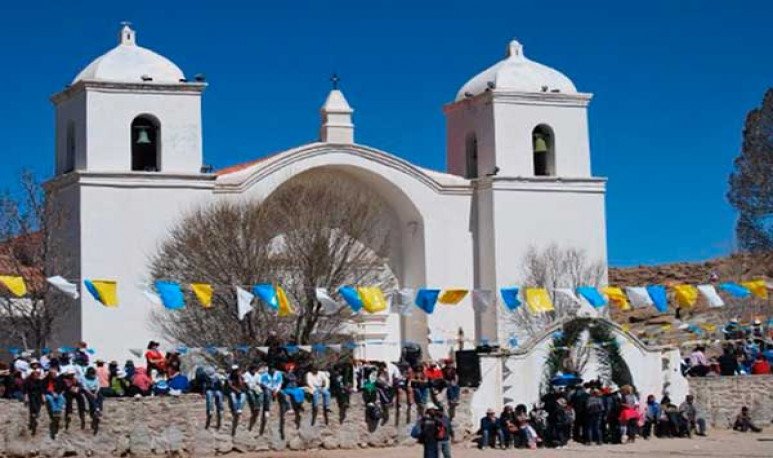 La Vincha bullfighting  is a celebration that takes place during the month of August in the town of  Casabindo  in the province of  Jujuy.  It is a popular festival that has an important religious value and is the only  bullfight  that takes place in the country. It is called bullfighting de la Vincha because the goal is to get the bull out of his forehead a headband with silver coins that will then be offered to the  Virgin of the Assumption  , patron saint of the place.

An important fact is that  the animal is not hurt , unlike bullfights that take place in Spain, the danger lies for bullfighters who are usually injured. During the act it is sought to tire the animal and dodge it at least three times before removing the headband, but never damage it. In case the headband is removed before the three times mentioned, the bullfighting is cancelled. The reasons why locals are encouraged to such a risky act is to prove that they can perform the feat without being afraid, but in most cases it is  an offering or homage to Our Lady in exchange for a personal request.

The festival begins on August 15 and Casabindo dresses up on a feast to honor Our Lady and welcome visitors. As men prepare to face bulls, women prepare the church altar for the  central Mass . Part of the ritual involves dressing the religious image and changing the hair to it, for this a natural hair is laid that is offered by the promesants of the place (mostly children) as a  symbol of faith and surrender.

Every year the Virgin receives gifts, including mantles, lamb quarters and kid. The latter is because most of the inhabitants live from sheep cattle, llamas, cows for that reason is that these kinds of donations are carried out.

Bullfighting is linked to protection, the spirit of the Festival is to play and celebrate with the bull the relationship between man and animals. This is reflected in other local customs that are intermingled as offerings to the  Pachamama, which claim respect for nature. In addition, the month of August symbolizes the  best harvests , the best animals, so this season is chosen to entertain Our Lady with this kind of gifts and feed Mother Earth.

The celebration takes place in front of the Church, which is considered the Cathedral of La  Puna  due to its large size compared to the number of inhabitants. The temple is one of the attractions of the area, as it is preserved almost exactly as it was at the time of its foundation in 1722.

Casabindo is located in the department of Cochinoca at an altitude of 3,400 meters above sea level. The town has 100 inhabitants -approximately - but this changes every 15 August when tourists arrive from different parts of the country, abroad and the province to be part of the holiday.

To get from San Salvador de Jujuy, take Route Nº 9 to  Purmamarca  and then take Route Nº 52 from Tres Morros to Tusaquilla to arrive at Casabindo.