Home Argentine Traditions They made in Tandil the longest salami in the world, which is higher than the Obelisk

With 87.56 meters in length and 262 kilos in weight, it was presented at the 36th Edition of the Festival de la Sierra. 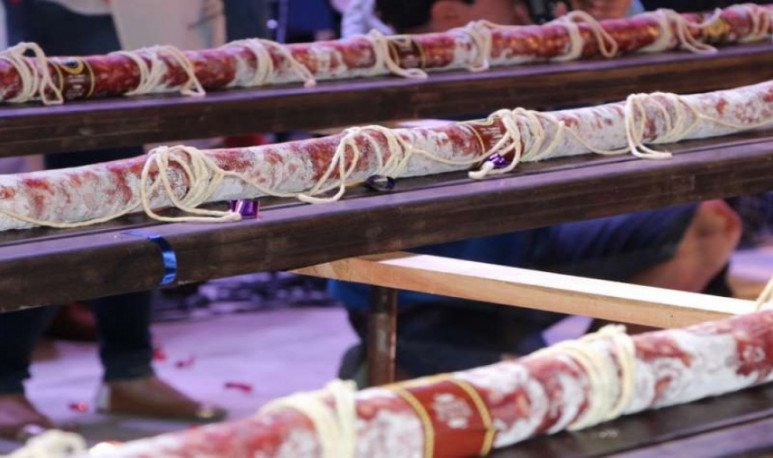 The longest cured salami in the world, 87.56 meters in length and 262 kilos in weight, was presented in the Buenos Aires city of Tandil, within the framework of the 36th edition of the Festival de la Sierra.
The Council of Denomination of Origin Salame de Tandil presented this giant sausage, which had to be transferred by more than 30 people, in the Municipal Amphitheatre before about 10,000 people.
After the measurement made by the chef Juan Braceli, who confirmed the new record, part of the salami was shared among the attendees, another was auctioned to the public - to the benefit of the Food Bank of Tandil - and the rest was destined to be tasted by tourists in the different restaurants of the city. A total of 57,500 servings of salami were offered.
The production of this giant sausage took a month and required the work of 60 people who processed about 220 kilos of meat and bacon.
With its 87.56 meters long, the salami is higher than the Obelisk of Buenos Aires and surpassed that of the previous year, which, at 53.4 meters, had become the longest in the world.
“ Year by year we live this moment as a great challenge. It is a moment of happiness in which we see what we can achieve by working together. In this record are present our community, our ancestors, our shared history”, declared Juana Echezarreta, president of the Council of the Denomination of Origin Salame de Tandil.
The record was announced in the framework of the 36th edition of the Sierra Festival, which began on Thursday 7 and culminated on Tuesday 12 with a show by Chango Spasiuk.
Visitors could also enjoy steakhouse, singers, guitarists, dancers, talks, picadas and a fair of regional products.
The production of the longest salami in the world was produced according to the patterns of the Denomination of Origin Salame de Tandil, with raw materials obtained within the region, with feed based on pastures and corn — depending on cattle and pigs, respectively — and with the established proportions of beef and pork.
After being parked and cured, the salami acquires the necessary consistency and the plump — this is what the fungi that cover it — gives it the characteristic ash white color, essential in obtaining the flavor.

In danger of extinction: indigenous languages that could disappear

If you are pregnant, avoid boldo tea