Home Argentine Traditions The town of Santafesino where queens meet

In Carlos Pellegrini there is a very special national holiday: the queens of all the other festivals in the country gather together. 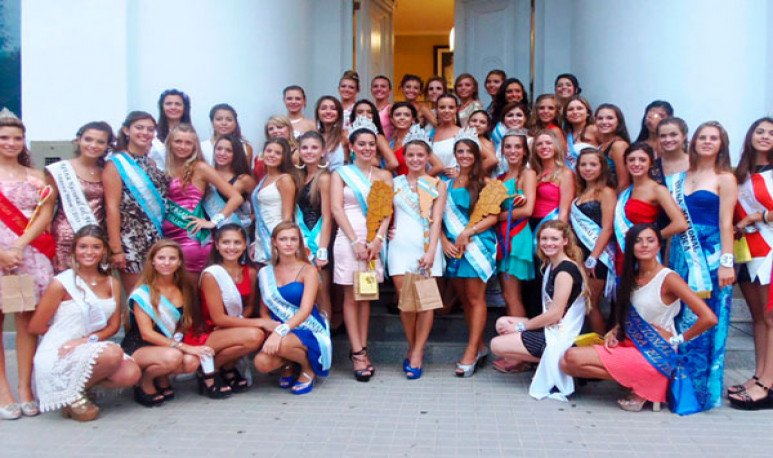 Carlos Pellegrini is a town in the Santa Fe interior. To the central-west of the province,  about 170 kilometers separate it from the provincial capital . It is a beautiful  village  of less than seven thousand inhabitants. Despite its small size, it has the honour  to host no less than two national holidays every year . This is the National Festival of Cultures and the National Festival of National Queens. The latter, very particular, is about which we will tell you everything in this note.

This festival, whose acts begin with  musical performances, ballets and a folkloric rock , brings together more than forty representative delegations from various national festivities that come to the event with their respective queens to choose, from all queens, the National Queen of Queens Nationals.

This is how the city of Santafesina Carlos Pellegrini becomes during the second half of January a reign of beauty  or a sort of national capital of Argentine beauty.

The festival was held for the first time in 1985, following the concern of some neighbors who wanted Carlos Pellegrini to have a celebration to bring the community together and to build new and better social ties  . The idea was well received at the Club Atletico Americano, whose members, backed by hundreds of fellow citizens, decided to put it into practice. A year later,  in 1986, it was declared a national holiday  by a resolution of the Ministry of Tourism.

However, the celebration was overshadowed during 1990, 1991, 1992 and 1993 due to the delicate situation of the region's production complex. The ravages of neoliberal economic policy, inclement weather and disagreements among those responsible for the organization led to the postponement of the celebration.

The whole village is dedicated to a great event

Reinstated in 1994, the National Festival of National Queens rescues values such as commitment, solidarity, respect,  friendship  and companionship, as well as extolling a true federal spirit through a show ofaacute; ass in which  all the national holidays flock  with their queens to Carlos Pellegrini.

In addition to the long-awaited coronation ceremony of the Queen of Queens, the schedule of activities includes the realization of a folk rock  with local and regional artists, a parade of vehicles  through the streets of Pellegrini, humorous numbers, popular dances and a fireworks. The celebration closes with a farewell lunch.

Carlos Pellegrini was one of the cities that starred in the Grito de Alcorta, a social conflict that began to end the inequitable land granting system in the Pampean region, where immigrants and small producers lived marginalized from the usufruct of the land. This episode gave rise to the representation of small chacareros through the creation of the Argentine Agrarian Federation.

Far from the social problems of that time, today the city of  Carlos Pellegrini prepares each year to host  Argentine beauty and host the National Festival of National Queens. As if this big event were a small thing, at the end of the year  , in December, the village again receives thousands of people on another national holiday.  But we're going to tell you about Cultures in some other note.

A German holiday in the heart of Santafesino territory

The national holiday of crafts is santafesina

The National Harvest Festival, in danger