The Serenade to the Hero Gaucho is a tribute to Martín Miguel de Güemes that combines tradition, tourism and shows. 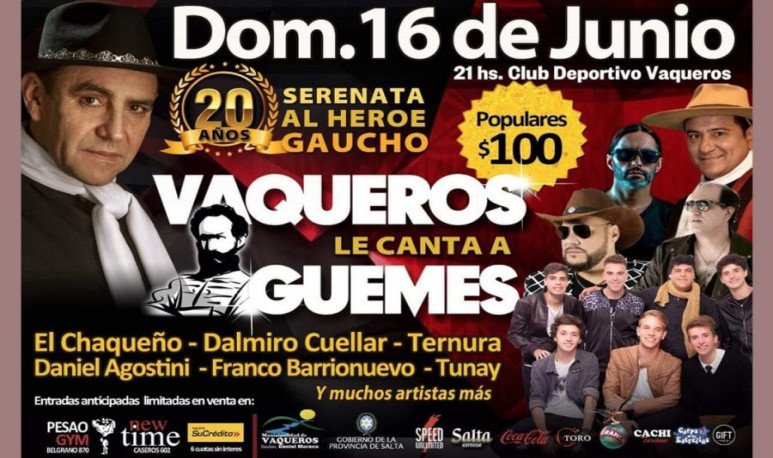 The Serenade to Hero Gaucho will develop its twentieth edition next Sunday in the Salta town of Vaqueros. It is a tribute to Martín Miguel de Güemes that combines tradition, tourism and shows.

The activity will take place within the framework of tributes to the procerer of Salta, on the 198th anniversary of his death. It will be in the Sports Club of that commune located 10 kilometers from the provincial capital.

The mayor of Vaqueros, Daniel Moreno, said they are “very happy to be 20 years of this festival. We do this to honor our hero gaucho and to show Salteños and tourists our culture and our tradition.”

This is one of the main events of the Guemesian calendar organized by the Ministry of Culture, Tourism and Sports. It will be spread throughout this month.

The Secretary of Tourism of Salta, Estanislao Villanueva, congratulated Vaqueros “for the joint work they have been doing between the public and private sectors, to make this festival one of the most important in northern Argentina”.

During the presentation it was anticipated that the festival will have an outstanding billboard. With artists such as Chaqueño Palavecino, Dalmiro Cuellar, Tenderura, Daniel Agostini, Franco Barrionuevo, Tunay, Projection Chicoana and Los Ñaños, among others, who will be on stage from 21.

Güemes was the country's first elected governor  and his administration in Salta lasted six years. It was constituted as a fundamental piece of the Argentine War of Independence, for stopping numerous Spanish invasions on the northern border.

The procerer died on June 17, 1821 . It was after dying for ten days after receiving a gunshot wound from realistic troops.

Organ Donation: You can give something to change everything

Alfajor, the most argentinian treat