In September it was 24 years since Diamante's motorcycle encounter revolutionized the scene with its thousands of wheels on the streets. 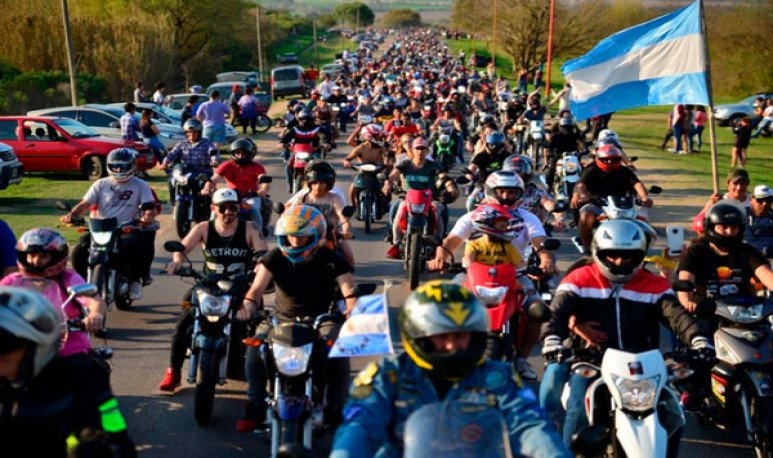 A   caravan  of exhaust pipes  that  roar  for  five whole days  . When you ask about the places of origin, we will find a   city   salad   . The expressions that are observed are of  happiness, celebration and anxiety  for what you are about to live. The  Diamond Motor Encuentro  is an  entrerriano symbol    that takes place every year since  1996  . There, we will be able to observe  motorcycles of all colors and styles . Some smaller and others immense. Attendees invade the town and proudly display their models.  So put on your helmet and get ready to know an authentic tradition that overflows wave .

The festival takes place  every September , with  Saturday being the  most important day . It is that, during the afternoon, the  expected parade of motorcyclists  around the town takes place. Thus,  rows of more than 11 kilometers of  motorcycles are assembled that travel with the accompaniment of the neighbors.  No one  wants to miss a tremendous moment, so people go out to the  streets   to contemplate it and applaud  the participants. Whereas, the rest of the time, the fierros travel through the landscapes, the hills and the river. In addition, they participate in the  various activities proposed by the organization . Some of them are jumps, stunts, visits and excursions around the place and the region.

A tourist attraction turned into an emblem

In its beginnings it was called  Motoencuentro en dos ruedas Ciudad de Di  It was an initiative of the local  municipality  , implemented through the Directorate of Sports and Tourism. The first editions had a  joint work  with the  program En Dos Ruedas  (televised by Cablevisión Noticias, CVN). However, from  1999  onwards he remained solely  under the office of the State body  , thereby  reconverted its name  . The event was renamed  Motoencuentro Internacional Diamante . A fact that ended up materializing when it was  declared Provincial Festival  in  2001  by Provincial Law No. 9329.

Over the years, the event ended up becoming one of the  most anticipated calendar dates of its kind in South America  . Its  growth  was so  imposing  that it  became relevant both within the country and beyond our  borders   . Several factors had to do with this happening. Undoubtedly, the presence of important firms such as Harley Davison and the superadora proposals of each edition contributed significantly. Let's not talk about the warmth with which diamantinos receive their visitors.  Where is it? The magic happens in the  Valley of La Ensenada , a property that requires constant maintenance for the expected date.    Thanks to the work of various municipal areas it is ready for adrenaline.

A lot of rock, baby

One of the  most central seasonings  of Motoencuentro is  music  .  And not just anyone, but rock. Tons . In fact, the  first artist  to perform for the audience was Pappo  Nappo Nappolitano  himself. That is why  today  the  main stage is named after Norberto “Pappo” Napolitano  , where all musicians feel proud to play. In addition, Pre Bands competitions are held on street tables, to select those lucky to show their art to thousands of people.

Grids  are always  intended  for  lovers of iron  . In this regard, it was also possible to count on the presentations of  recognized regional and national bands . Among the most renowned of the last group were Las Pelotas, Attaque 77, La Mancha de Rolando, A.N.I.M.A.L and Rata Blanca.  You want a choripan shaking his head, right?