During August, the province commemorates Exodus Jujeño, the historical gesture where the population left their lands to prevent the advance of the Spanish army. 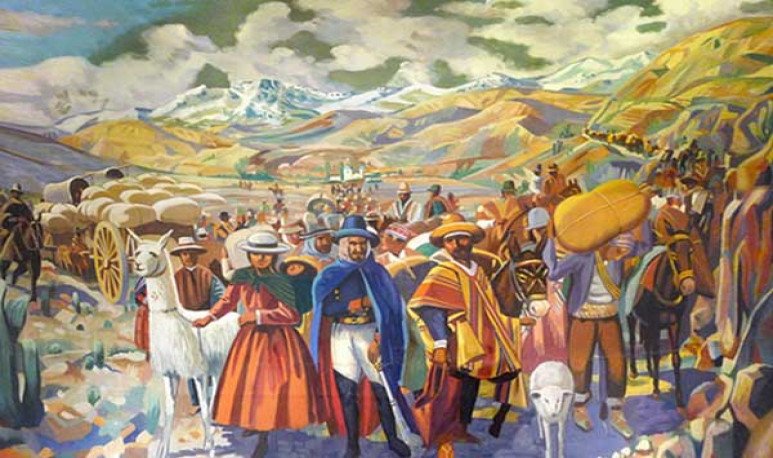 On August 23, 1812, General  Manuel Belgrano  ordered the Jujujuño people to go to Tucumán before the imminent advance of the Spanish army. The mandate also included that they devastated everything in their wake, that is that the inhabitants must destroy everything they could not take in order to dissupply the adversaries. The historical event will later be known as the  “Jujeño Exodus”.

On donkey back, wagon or on foot, the population left their lands marching for days to stop the invasion of the realists. They burned their crops, their houses, on the expedition to Tucuman. This tactic is known as  “razed land”  and was the weapon used by a Northern Army, which was scarce and demoralized. Both the Exodus and the Wars of Independence of  Jujuy  forged an important chapter in  Argentine history.

It was at the beginning of 1812 that General  Manuel Belgrano  arrived in the province of Jujuy to take command of the Northern Army. As a sign of his patriotism, he blessed the newly created  national flag  in the local Cathedral. The situation was alarming: the realistic army was successfully advancing down Cochabamba by crushing the revolutionary spotlights that appeared in its way. The enemy had at least three thousand soldiers in its ranks, discouraging patriot troops who saw a victory impossible.

It was on July 29 that the general decided to take a forceful measure and asked the population to withdraw from their lands burning everything that could serve the invading army. The aim was to strip the realists of home, food and livestock, thus initiating the Jujeño Exodus, a true patriotic act that would be reflected as the bravest feat of the people of Jujuy. In this way, people left their homes behind and, carrying only what they could carry, started the march towards the province of  Tucumán.

It should be noted that not all inhabitants chose to abandon their roots and belongings. Of the three thousand inhabitants, only five hundred followed Belgrano, the rest of them, who mostly belonged to the upper classes, hid or decided to flee. Thus began the march in the middle of winter, whose last column left on August 24 at 3 in the morning.

A month later the battle of Tucumán would take place, where the Northern Army defeated the Spaniard. The realists were forced to recede until they were finally defeated at the Battle of Salta in 1813. Only after six months the village of Jujuy was able to return to their lands, but it was thanks to the dedication and love for the homeland that they became heroes and fervent participants of the liberation of the country. fundamental in the struggle for  Argentine independence.

Virtual celebration because of social isolation

One of the most important events on this day is the traditional military and gaucho civic parade that is held in commemoration of the historical gesture, but because of social and compulsory isolation it was suspended.  Gauchos, undoubtedly the leading figures, will be present online.

The initiative seeks that the  Gaucha Federation will make a virtual greeting  where all the Gaucha Associations in the province participate, which currently are more than one hundred. In addition, a virtual serenade will be held which will begin on August 22 and will be broadcast by local media. To carry it forward, an important number of artists were summoned who will be able to offer their music throughout the four hours of transmission.