Home Argentine Traditions “The Homeland for me is childhood”

The artist Nora Iniesta stains blue and white, Argentine traditions, her renowned production that spawns new senses to what we call Patria. 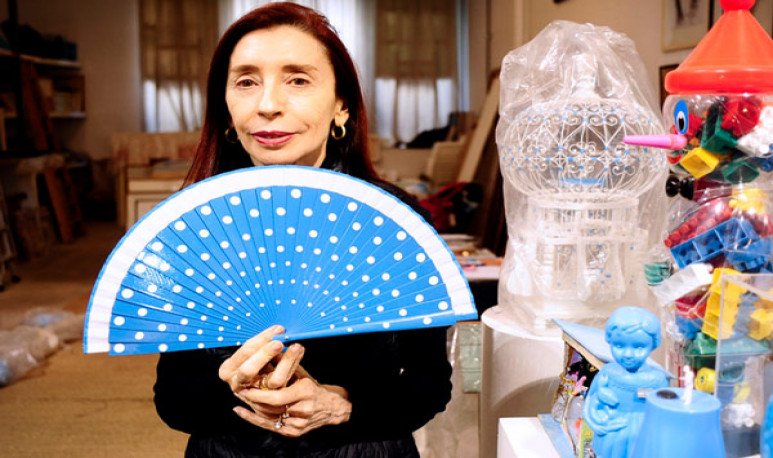 “ Nora Iniesta  developed from a girl a very special sensitivity for the world around her” Virgilio Tedín sensed an artist who since 1980 investigates the reverse of the plot of our traditions, of our customs. Frequent guest of solo exhibitions and biennials in the country, and the world, in  Iniesta,  “that attitude that the artist has managed to preserve comes from the amazed girl's eye that, before the small, manages to see as fabulous the simplest existence... with picardy and lucidity interweaves a child as fabulous... with picardy and lucidity interweaves a babyshe laughs at the topics invoked: homeland, femininity, playfulness, belonging, tradition, memory,” analyzed  Andrés Duprat, current director of the National Museum of Fine Arts .  Exploring , renewing, threading, arts, graphic design, objection, fashion and communication,  Iniesta revitalizes national sources in domestic, commercial spaces and urban , there her works linking childhood and homeland in blockades for the celebrations of the Argentine Bicentenaries “On the insistence of blue and white, which she discovers both in the occult and in everyday objects, where a unique style is confirmed, and a special beauty” pointed out the journalist Canela with the  certainty of a nationalist iconography of Iniesta , in a variety of supports that stirs the soul of things, whether plastic or cloth, “with concern for  national traditions, childhood and the future . In a tone that goes from restlessness to candor,  Nora Iniesta  appeals to the contemporary world, preaching an attitude that invites reflection and awareness. In a time full of images, discourses and banalities, the artist opts for a return to simplicity, a review of values, and to regain the time necessary to rethink the world we live,” says critic Rodrigo Alonso.  Iniesta traces ways to feel a homeland that calls us again to play, to dream.   That's calling us.

Journalist: When and why do you decide that the Fatherland would be your subject?

Nora Iniesta: It is not a rational or sought decision.  Homeland for me is childhood . School, school events, the excitement of having felt the enjoyment and enjoyment of participating in the holidays or performances in my school. The entry of the Flag. White aprons.

That is where this concept of  PATRIA comes from, a place of belonging. A place that shelters, arrows and protects .

Thus it took body, form, and then from there it became naturally work, in my work or personal language.

Q: What place does childhood occupy in your work?

NI: A fundamental place. Important. That's where my creativity is focused. In what was learned and lived at that stage.  I just recreate that time, or he sneaks into my whole production.

NI: I can't, it would be unfair to talk about a single Argentine artist as an influence. I feel influences from many different artists, those I studied, those who trained me, those I admired and continue to admire.

I was a friend of  Federico Manuel Peralta Ramos , and she was someone I still admire his lucidity, his talent and his bonhomy.

Q: How do you decide the choice of techniques and materials?

NI: Both techniques and materials refer to my painter training. Fine Arts was a great training. I usually find objects, papers, elements; I assemble them and they serve as a trigger for my creation.

It is little that one decides; things are imposed. It is a dialogue, a deep crossing, where the object or paper, or material, becomes indispensable.

Q: By the selection of objects linked to femininity, fabrics or plates, is she considered a feminist artist? Can you talk about an Argentinian feminist art?

NI: According to Rafael Squirru, art has no sex.  You're an artist first of all; I'm  a woman    .  Art reflects the same thing that society itself does. He's no stranger. We live in a historically patriarchal society where I have no doubt, women are increasingly peering or approaching a greater, more equitable leading role, but there is still a lot to equate. That's what we're in.

Q: In your work he rescues various traditions, from gauchos and folk saints to school liturgy and Peronism, what does Tradition mean to you?

NI:  Tradition, good word . It is what we inherit, which we maintain as behavior or behavior. Just as in my works I use objects of everyday use, my language, i conography  is linked to figures recognized or known to a vast majority. They are images of the collective imaginary for the most part. They are part of my life to live in a certain place, so they are also part of Argentine and/or universal history.

Q: You have a book called “Curiocities, the Found Fatherland”, which homeland found or found?

NI:  Curiocities, The Fatherland found , such the title of my book alludes to cities all known and visited by me. From them I take, rescue, something in common: white and celestial elements that in them I spontaneously discover, find.

What I find is a HOMELAND presence, the color of our badge, our flag, mutated in various forms, on it is based the book.

Q: What does it mean to you to be an Argentine?

NI: I am Argentinian and Porteña, raised in the city of Buenos Aires.  Being Argentine is to recognize myself in this place so south of the world where I feel my own way of being, its colors, its landscapes, its coexistence and crossing idioms, languages and geographies. 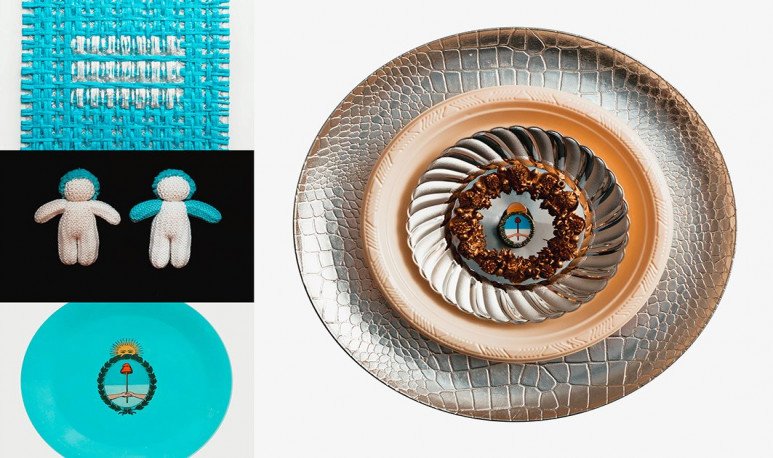