Home Argentine Traditions The history of the argentinian asado

The man has been cooking on the embers since he learned how to handle the fire. But the Argentine asado has its particularities. Do you know his story? 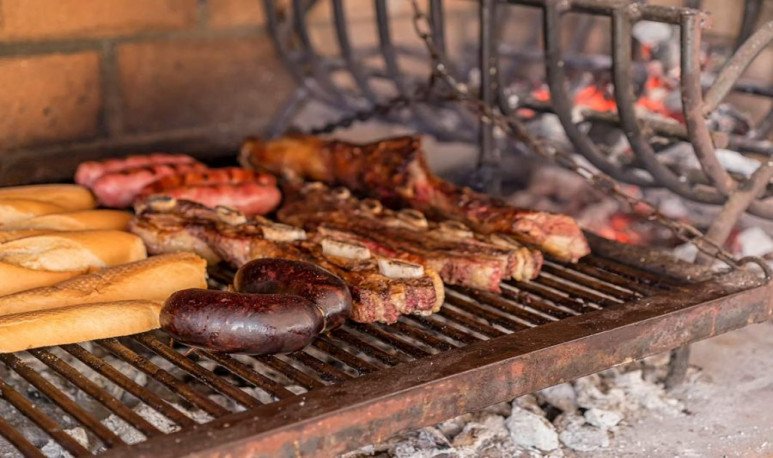 There are very few Argentines who don't think that   asado  is our national food . As you can imagine, being such a rustic method (which basically consists of throwing a piece of meat on the fire), we do not invent it. But it is indisputable that we gave it a special touch. But what is the story of the roast?

Historians are more or less agree that  man learned to handle fire about 500 thousand years ago . Most likely, fifteen minutes later some advance came up with throwing a bug on it. I'd love to have the time machine to see his face when he tried it. There was still no salt or  chimichurri , but certainly it  was a copernicano twist on the palate : there began the roast.

Jumping a lot in time,  we are already on earth that years later would be known as Argentina . Here we must add a fundamental fact: the species “Bos taurus primigenius” (the predecessor of the cow)  is native to Asia , domesticated specimens 7000 years ago. The species “Bos taurus”, to which cows as we know them today belong, is  European . That is, the first copies came with the Spanish invasion. This is how in 1556, the first cow landed in our country and is brought to what is today Santa Fe. In 1580, the time of the second  founding of Buenos Aires , there were already thousands of specimens scattered throughout the pampa, which offered the ideal natural conditions for the customs and needs of the species.  It is estimated that by the end of the 18th century there were already 40 million specimens.

When the roast was everyone's and it wasn't anybody's

And here is another fundamental historical fact to understand the popularity of the roast:  cows were not yet anyone's property . Anyone could hunt them with only one condition: not to kill more than 12,000 heads (go check it, won't you?). But the point is, if there was hunger, you could get hands on the cows that were going around. Alonso Carrió de la Vandera wrote in the late 1700:  “  Many times they come together from these — he refers to what would later be understood as “ gaucho ” — four, five and sometimes more on the pretext of going to the country to have fun, not carrying more prevention for its maintenance than tie, balls and a knife. They agree one day to eat the bite of a cow or steer; they link it, knock down and well trapped feet and hands, they take out, almost alive, all the rump with its leather, and making a few bites on the side of the meat they roast it badly and half raw they eat it, without more dressing than a little salt, if they carry it by contingency.”

Gauchos  were basically looking for hides and bait, which is what had commercial value.   Meat  was not sold, so it was constantly wasted . It would be necessary to wait until 1890 for Juana Manuela Gorriti, an extraordinary writer, to publish the book called “Eclectic Kitchen”, which included the roast, explaining how to chop it, spice it and cook it. At the beginning of the 20th century the gauchos changed their way of life and  had to integrate into the productive and commercial matrix of the country,  so they moved to the cities. And with them, of course , they carried their culinary secret . The asado was already the protagonist of the big Argentine cities. Finally, around the 1950s, the   grills  began to be installed in the houses of the Argentines in the social stratum they were  (until that time it was “raw food”). From there to today's gourmet meat there is only one step. And you guys, how do you make the roast? Any special tip?  I leave you, I'm going to light a fire.