Historic. Tons of concrete on the hills. Greek theatre only exists to host the Harvest Festival. Here, your story. 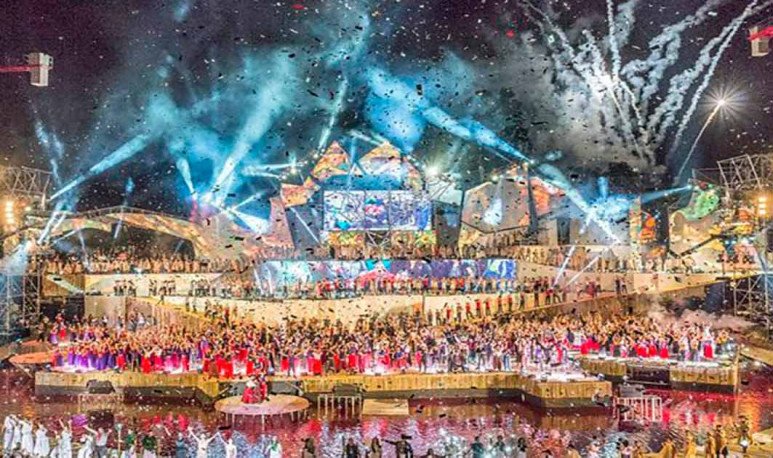 At the architectural level, the theater of ancient Greece fulfilled certain characteristics. He contemplated a stage, a space for  the choirs and the stand. The latter was also named “koilon”. It was formed by the set of stands where the spectators sat to watch the show. It had semicircular shape  and corridors in the middle for people's access. Usually the stands were mounted on the skirt, fall or slope of a mountain. The semicircular shape was designed so that the entire audience was at the same distance from the stage, except for the difference in height.

Mentioned a brief introduction of what a Greek theatre is, we will begin to talk about what exists here in Mendoza.  His name is Frank Romero Day, referring to the agronomist who was in charge of the public works portfolio in Mendoza and who allocated the funds to begin its construction. This was completed in 1963 , when the Greek theatre was inaugurated with the National Harvest Festival that year. However, to conclude the theme of its name, we must mention that the original was the amphitheater of   Cerro de la Gloria or the great open-air theater of Cerro de la Gloria.

The place chosen for the construction of the Greek theatre , according to the words of Don Daniel Ramos Correas, architect of the work, “it was already done by nature, it was the ideal place and only minor works were left by man.” It can accommodate 21,686 spectators.

On the other hand,  it has 120 meters of scenic mouth and the backrest of two kilometers of hills . The wide platform that performs the function of stage, looks like a large tray and is separated from the stands by a water source.  The surrounding hills are named by Don Abelardo Vázquez as Cabernet, Pinot, Semillón and Vinegar.

Multiple scenarios , belonging to the constructed mass, are enabled simultaneously with a total area of 900 m2 to which circumstantial scenarios are added according to needs.  The central proscenium has 60 meters of mouth, allowing a  180° view  of the Vintage Festival .

Only used for Harvest

A huge and historic social claim has always been  the fact that it is only used for the National Harvest Festival .  The deniationists of this idea argue that the stage is too large and imposing for only one band to perform in the replay nights that Greek theatre can be perfectly used for musical performances  , theatrical plays and so on.  rock , for example.

For a long time he was known as “amphitheater” Frank Romero Day. In fact, it is to this day that many Mendoza call it in such a way. However,  it is a misconception. It is that an amphitheater is, as the prefix “amphitheatre” marks it, a theater that has stands and stands around and in its entirety.  That is, in a circular way, complete. This is the case of the  Roman Colosseum .