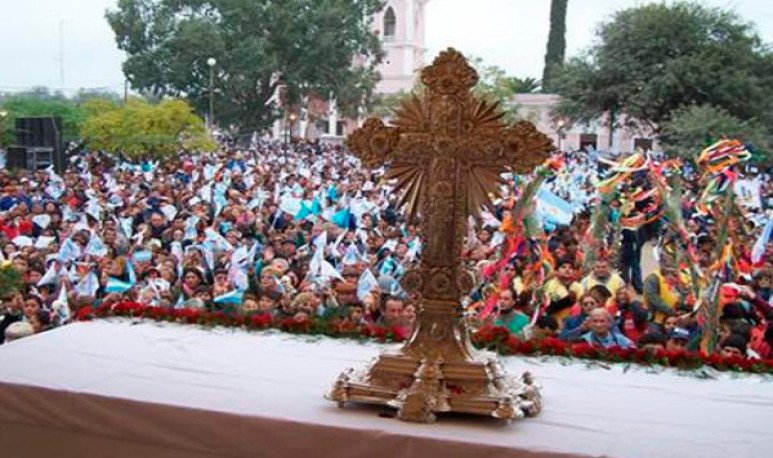 The Feast of the Lord of Miracles of Mailín  is a traditional celebration held in the town of Mailín  , department Avellaneda de  Santiago del Estero . Every year, santiagueños mobilized by the faith visit the place in May, where they also enjoy the gastronomy offered by the village at that time of year.

This festival is one of the most important  religious  celebrations in the north of the country, where its faithful approach the sanctuary, which has been declared as a National Historical Monument. Its locals live those days of holiday with lots of intensity, labor and prosperity and, above all, with a lot of faith.

With regard to the word “Mailín”, in that locality they argue that it comes from the names of the  indigenous  tribes that populated that area. As for the cross that its inhabitants venerate, it is a finding they called “Lord Forastero” and dates from the last third of the eighteenth century. The story tells that the cross was found by an old man named Juan Serrano, foreman of José de la Cruz Herrera, who had owned these lands at the time.

For his part, Serrano said that, in the evenings, a radiant light appeared at the foot of a tree located near where the sanctuary is currently located. Attracted by curiosity, he approached the place to observe more closely what it was about, and found that light lit a cross.

Serrano tried to move her, but he couldn't move her from the place.He told some locals about the discovery, who went there to help him move the cross from that place, but they didn't succeed either.Then, they decided to build a temporary chapel and worship the  sacred  image. Then they spread the great find throughout the community.

When the owner of the land learned about the discovery, he went to Serrano's house and gave him a wooden box to store the alms of the pilgrims who immediately approached that site. A year later, locals commented that the box was filled with money and objects coming from visitors who came to pray at the sanctuary.

It also tells the story that the cross belongs to the School of Art of Quito, is made of wood about 35 cm, black. To date, its faithful worship it in the sanctuary of Mailín, where it is located in a silver urn. In 1997, a copy of it was made by Luis Pascual Acosta, in the carpentry of the Parish of Garza. The cross was painted by Victor Quinteros of Santiago del Estero.

The strength of faith

In 1914, the village of  Mailín  had about 400 inhabitants; in 2001, about 500 and, as the years passed, the number of inhabitants multiplied. This population growth, historians argue, was due to the great importance on the history of the discovery of the cross, that every time passed its locals increased their faith on the “Lord Forastero'”, where santiagueños who lived in the capital and in other areas decided move there.

In recent decades, the Feast of the Lord of Miracles of Mailin acquired greater relevance, as about 300,000 visitors came to the village for the traditional procession. It is a time where locals prepare previous days with their typical meals to sell to tourists, which implies a date also important for the economy  regional level .

This Argentine custom is still present until today in Mailín. Although this year could not be celebrated due to the pandemic, by 2021, the people will surely prepare with more enthusiasm and with the faith that characterizes it for the celebration of the “Lord Stranger”, as they call it the discovery of the cross, in an event that will bring together not only the santiagueandbut many promissants from different parts of the country.