The famous Argentine Doma y Folklore de San Justo contest will be in April, in a reduced version. 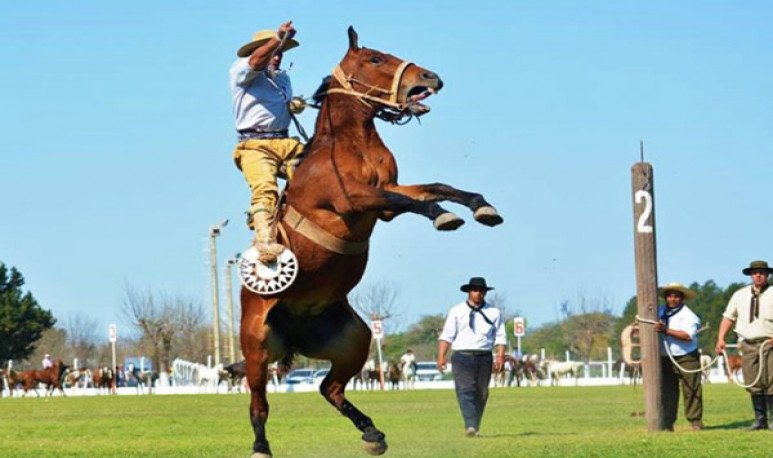 One hundred kilometers north of the capital of Santafesina lies the town of San Justo . Known as El Gate del Norte, it holds a traditional festival that takes more than 40 years : the Argentine Dressage and Folklore Contest. All the gauchesca tradition meets in this city of Santa Fe. A city in a province where gaucho and livestock activity are living history.

Even at a time where shows and festivals in which animals are being worked are questioned, San Justo managed to keep a tradition alive since 1977 . Only a global pandemic was able to make the 2020 edition not unfold.

The Dressage of San Justo is one of the most important shows of rider, folklore, traditionalism and argentinity in the country. for obvious reasons, the great Gauchesco meeting did not take place last year. But he will be back with all next April , although, of course, it will be in reduced version.   It will be the novel Meeting of Tropillas and the date they are disseminating is 10 and 11 April . In this regard, the governing committee of the organizing club has been working with a clear north. “We stress our commitment, as a social, cultural and sports entity, that we ensure the public health of the inhabitants of our community, so the date for the 1st Meeting of Tropillas is subject to the conditions regarding the evolution of the pandemic (...) we will be reporting with anticipate any change that is warranted. Likewise, if the conditions are appropriate for the event, we will abide by all the corresponding protocols to take care of the health of all participants and the San Justo community.” That's how they were expressed on social networks.

It is a lot that is affected

Sometimes, you have to reflect on everything that is affected when an event of this magnitude has to be suspended... The contest is visited by contestants from all over the province of Santa Fe, Córdoba, Entre Rios, Corrientes, Chaco , Santiago del Estero, Buenos Aires Throughout more than four decades,  his shows highlight the presence of high level and renowned artists. It is broadcast and shown by the most important broadcasters both provincial and national.

The “Doma de San Justo”, as it is known, is the most important show of riders and folklore that is among the most important in the country, with high quality tropillas, national folk concerts, and an astonishing influx of audiences becomes a must-see event.  It gathers around 30,000 people in the Sports Complex of the Club every year,  so it is defined as “a city within the city”.

At that time, the so-called First Interdepartmental Dressage Competition had the participation of 4 tropillas corresponding to San Justo, San Cristobal and Nelson. Year by year, it grew to a total of 18 tropillas today.