Home Argentine Traditions The Army on the Day of the Rosade

May, it is Patriotic month, and this 18th is celebrated on the day of the National Cockade. The Army will participate in various activities. 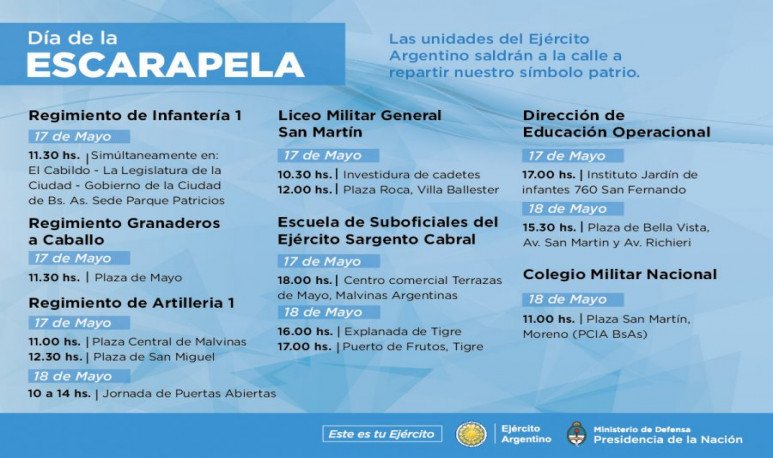 On February 18, 1812, the First Triumvirate established the national coarapel of the United Provinces of the Rio de la Plata, white and celestial blue . The origin of colors and reasons can not yet be established accurately.

One version says they came from the Bourbon colors, from the house of Ferdinand VII (king of Spain). Some sectors that supported the creation of the First Junta did so as a way of governing in the name of the king deposed by Napoleon.

Other origins indicate that white and celestial colors were first adopted during the English Invasions (1806-1807) by the Patricios, the first urban militia corps in the Río de la Plata and that later began to become popular among the natives.

It is also said that the  Argentinian cockade  was first used by a group of ladies from Buenos Aires when they presented themselves to an interview with then Colonel Cornelio Saavedra, head of the Patricios Regiment, on May 19, 1810.

The only thing that is known with supporting documentation is that on February 13, 1812 General Manuel Belgrano, by means of a note, requested the Triumvirate to fix the use of the national cockade. Whoever then used the colors of the cockade to create the National Flag, founded his request that the army bodies used varying colors and that it was necessary to uniform them all, since they defended the same cause.

Thus, only five days later, the Government decided to recognize the National Scarapel of the United Provinces of the Rio de la Plata in the colours white and celestial blue.

Joy in a return

A coffee with stains