Details of the dress of the gaucho santafesino, character of the coastal fields from the colony until the mid-19th century. 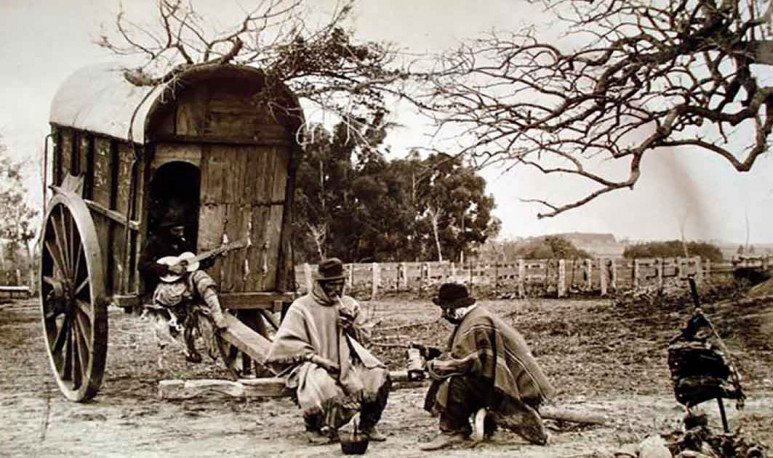 Few  national symbols  are as representative of the Argentinian being as the gaucho. Particularly, the gaucho santafesino had a very rich history from its appearance in colonial times until about the middle of the 19th century.  His dress was very special.

The basic description,  what was not missing  in every  gaucho  santafesino was, broadly speaking, jacket, vest, open knee breeches, clothesline boots with spurs, hat of straw, girdle and knife to the waist.

One thing that was a style brand was the introduction  of articles and garments from Peru , as a result of the mular trade made with that viceroyalty. Francisco Candioti was perhaps the largest mule producer and merchant in the Río de la Plata. Every year he made great strides to the markets of Peru, from where he returned bringing  valuable and fine items and garments that were not produced here . He was thus, in addition to being a stateman and a great lord, a true gaucho, who became a caudillo of his province and the first autonomous governor of Santa Fe. Everyone who could  then incorporate the new articles  into the “gauchesco outfit” of the time.

Over the years, the clothing was undergoing modifications. The most notable, perhaps, was the appearance of the  chiripá  that displaced the open pants on the knee.

A before and after the chiripah

This garment, in its oldest version, consisted of a rectangular cloth  wrapped from the waist down , turning and half from right to left, reaching down to the knee, leaving the fold open forward and holding it with a girdle to the waist. Most historians claim that the Chiripá originated among the Indians of the  Guaranitic Missions . From there it was extended its use at the end of the 18th century to the gauchos of southern Brazil, the Banda Oriental, Corrientes and Entre Ríos.

This way of wearing it, wrapped around the waist and legs, was later called  “chiripá a la orientala”, to  distinguish it from the one imposed after this band of the Uruguay River, crossing it between the legs.

In  Santa Fe  the primitive way of wearing it wrapped was also widespread, and although it did not completely displace the Spanish pants, little by little  they were adopting it  between the peonadas and wage earners known as “changadores”, until they become a distinctive characteristic of the gaucho in their different ways of wearing them.

Until not many years ago the chiripá to the Orientala was used in the center and north of our province, mainly in the footwork that the countrymen carried out for threshing or fine harvesting. They said that,  with such clothes, they worked more loosely  than with the panties or the chiripá passed between the legs, resulting in fresher and the movements more agile.

Scholars also say that it is possible that this way of using chiripá may have originated in the gaucho santafesino and then spread to the other provinces of  RioPlatense .