On Gaucho Day, a glossary of terms on horseback from the first days of the Fatherland. Contribution to the Argentinean language of the Gaucha culture, with writers to rediscover. 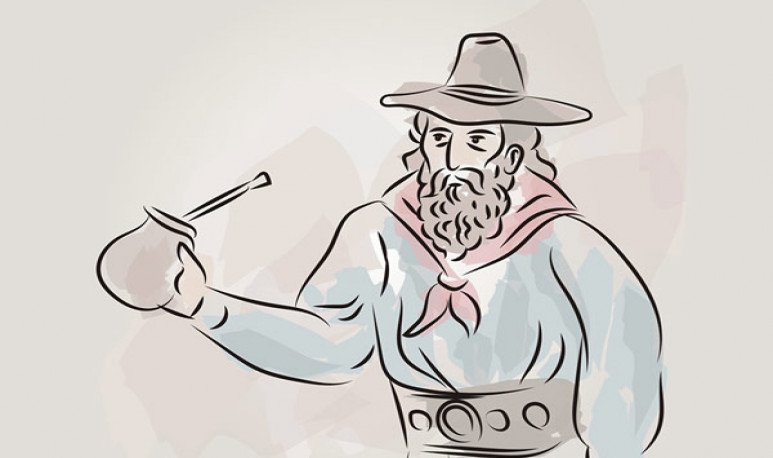 The language of countries are living organisms. They take and resume existence, and the feelings of each epoch made words, and link speakers and scribes into a timeless All. It is a large collective quarry in motion, without barriers, and with terms, meanings, that are born and die within the limits and needs. Because by speaking we activate a constellation of things said and to say. Using a national language is to refound word by word a bond of immemorial belonging.  An invisible, powerful silver thread that allows us to connect to distant times, as much as those of the gauchos in a pulperia of 1830, and tell an “old” friend, or when someone is petty and does not invite, “pijotero”

Ezequiel Martínez Estrada stated that in the speech of gaucho there was a tendency to differentiate and spread the anti-cult as a sign of sovereignty . If the doctor said “likewise,” the country pawn, “mismamente.”And if a gringo ordered an “alfajor” in the general bouquets store, the pulpero sold the national treat, but the gaucho gave a facon. It is not something that any “compadrito”, the cultural crossroads between gaucho and malevo, will “retobate”, that is to say get angry severely. Because there was always some “zafado”, or insolent, who could speak to the “rocket,” no ton or are.Or another “taken”, that is drunk, who wanted to do “quilombo”, so were called the precarious ranches of prostitution, and he started the “milonga”, a low-class dance that sometimes ended up beating. Nobody wanted to be “smoked,” that is to make fun. All the words quoted in surprising vitality are the  cultural legacy of the gauchos  and the Chinese to Argentine culture. And there are many more!

Before moving on to the most used today let's say that the survival of gaucho's speech we owe it to the lunfardo.  The language that allegedly did not exist according to Jorge Luis Borges, although in his youth he used and abused in early Creolism, is vertebral in the word argentina. The birth certificate orillero del lunfardo, on the margins of all kinds, social and grammatical laws, proudly exhibits several headings, and undoubtedly  the  gauchesque glossary , with its air of sovereign family and fighter, was its “ cumpa” nearest.  Both were linguistic outcasts, denied and hidden by cultural hegemony, and vapuleados who dared to give it artistic form, called José Hernández, senior poet of the Gauchesco, or Roberto Arlt, who makes the lunfardo literature on the path of Fray Mocho. We talked about two giant writers who accused themselves of “miswriting.” Nor to mention the appropriation of gauchesca speech, via lunfardisms and cocoliches, that would impact the lyricists of tango, or on theatrical sainets. The suppression of the syllable “do” (an Andalusian legacy in “piantao”, crazy, for example) or the “bowling”, another name for the pulpery, appear again and again in the tangos of the Discépolo or Manzi.  It is fair to say that gaucho also amplified the culture of the original peoples and allowed us to say as they “chucho” to fear, or “pucho” to the cigarette  (in fact the already smoked cigarette was called).

Let's get on the time machine, travel to a border town in 1850, and ask for a gin at the beat of a clown, we don't need translators, we're among the usual compatriots. And let's stop “pavear”, say pavadas, and “open court”, give way, to the  Argentine gaucho who lives  and speaks in each of us.

Achucharse:  shaking with cold, comes from the native peoples

Changüí:  Unconventional advantage in a game

Chicanear:  rudes in a lawsuit

Chimentero : who walks with gossip

Hook : help a person get something or someone; in particular with a loving goal

Jumetrear:  is to beat up; word used in northern Argentina

Singer:  the one who speaks or writes a lot

Commander : the waiter who gives the order of departure to the horses; arrogant

Music:  house with music or musicians

Eyelet:  kind of single-storey leather shoe and a strap for holding fingers

Paisano:  it is for the gaucho every man, in particular who has no job, or is not noble

Payment:  land of gaucho; you can also remit to the stay where pawns were paid

Querencia:  the place where lovers live

Rabona:  non-attendance of a person where to go

Remediate yourself:  is getting out of poverty ,  improving fortune — today a referral is to rescue  oneself

Being nits: on  horseback, is to know how to hold without falling

Being bakian:  he is right at something, or knows a lot

Tamangos : they were the calf leather boots; today they are called footwear

“Juera out of the shame of man, for efetus and the much drink he had or by any other philomene, a redepent turned green to me as spit and mate...“is one of the many Creole prayers of “El romance de un gaucho” by writer and journalist  Benito Lynch (1880-1951) Perhaps he is the last writer of the gauchesca, in his own codes and cimarron spirit, in the lineage of Bartolomé Hidalgo and José Hernández.  Contrary to the romantic stereotypes of Leopoldo Lugones and Ricardo Güiraldes, and Creolism in general, Lynch portrays the human types of the late nineteenth century pampa without lilisms or paternalisms. Don Pancho and don Panchito in “Los Caranchos de la Florida” (1916), Balbina in “El inglés de los güesos” (1924) and Pantaleón Reyes in “The romance of a gaucho” (1930), protagonists of their three main novels, throw credible men and women who came to know in their youth on the banks of the Salado River, between Bolivar, Monte, Cañuelas and Lobos. There are no Don Seconds Shadows, gauchos buenazos and idealized.  Lynch calves deep in the virtues of the countrymen, and also much in their shortcomings, in a psychological and social environment of  urgent realism .

“The best tamers are the least riders... And why? Because the tamer who is afraid of the animal is daunting it, he is docked and treated with a delicacy that does not employ those who trust everything to the revelation and his legs...“says Doña Cruz, another of the powerful female figures that proliferate in Lynch's novels and tales, in a counterpoint worthy of a Martín Fierro.  With the neogauchesca in Gabriela Cabezón Cámara or Juan Incardona of the two thousand, citing some also of urgent realism, Benito Lynch's work cannot be missing in a national library that prodigates new Hijos de Fierro.