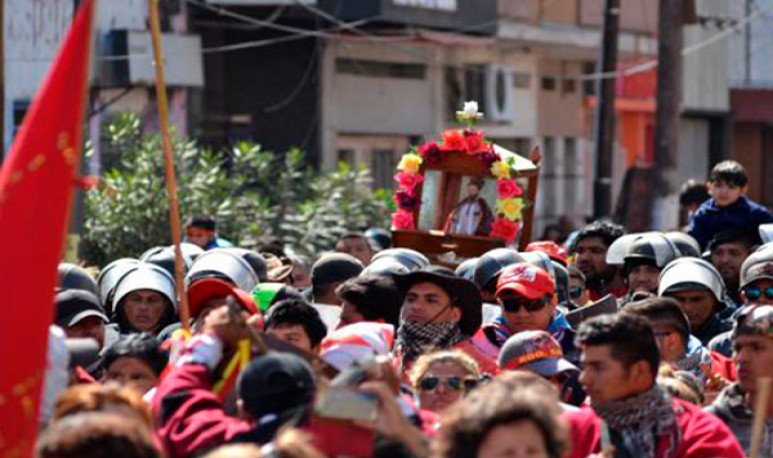 On the first of September, a congregation of thousands of  faithful  arrived in Sacha Pozo, Santiago del Estero. The meeting is held by the annual celebration of San Gil. There they will pay tribute to the saint, give thanks and celebrate in an atmosphere full of peace. Whether on foot or on horseback, devotees accompany the image on a pilgrimage that passes through several villages.

Who was San Gil?

San Egidio or San Gil Abad is understood in Latin as “El Protegido” or “El Defendido”. Some legends say that he was a wealthy  man  emigrated from Marseille, who had settled in a forest near the Rhone River. In the Middle Ages he helped King Charles in his conversion, to whom he discovers a hidden sin and decides to make him confess, which is why he is granted to be called “Advocate of Sinners”. Advocate against fear of helping a deer in danger and Advocate against epilepsy and cancer diseases. He is also known as the Protector of the Poor, for having been wounded by an arrow. He came to be considered one of the fourteen auxiliary saints. The devotion they had to this saint in France, passed through Spain and, from there, reaches South America.

The history of the holiday

The Hoyos de Cobacho  family  is responsible for the celebration. His responsibility dates back to distant times, when the image of San Gil reaches the hands of Chrysostom Hoyos. According to the story transmitted from generation to generation, a hermit named Juan Gil Gutiérrez gave the image to the ancestor of the Hoyos. Gutierrez bequeathed the figure to Chrysostom before leaving Sacha Pozo, claiming that this was the right place to leave San Gil.

The legacy continued as successor to the lineage of the Hoyos de Cobacho, who kept the tradition intact until the present day until it became a real popular festival.

The celebration of San Gil

On August 24 at night, the faithful and promissants go to the house of the Hoyos de Cobacho, because that date is called the “Velatorio del santo”. The next day, the pilgrimage to the city begins. Along the way thousands of pilgrims join the caravan. They travel about 40 kilometers without any rest with the image until you reach the parish of San Francisco. After spending the night in the church, on August 26 a mass is celebrated and, after the same, pilgrims begin to return to Sacha Pozo with the image of San Gil.

On September 1, at precisely six in the morning, devotees visit the Hoyos de Cobacho family home. Various fireworks fill with lights and sounds, starting celebrations for the saint, whom they venerate with fervor. The house of the guardians of the figure turns into a fair where different handicrafts are sold. Arrivals four o'clock in the afternoon a mass is held. At five o'clock in the afternoon a very short procession is organized around the places near the home. The San Gil celebration lasts until September 2 at six o'clock in the morning, at which time the celebrations end.

It should be noted that during the first of September the dwelling place of the depositaries of the saint is very crowded. They not only come from different places in Santiago del Estero, but also from all over the country, and parishioners return to keep a promise or to give thanks that their request has been fulfilled. San Gil is a very miraculous saint, so many people come to pray, ask him every year. The property consists of more than twenty hectares where the chapel is located as the house of the Hoyos de Cobacho family. The  place  is always constantly improving to receive more and more visits with each passing year.

The patron saint of the poor and farmers will always have his celebration, because he is already part of the tradition of the community of Sacha Pozo and, therefore, of all Santiago del Estero.