In San Cristóbal, Santa Fe, they have years of tradition in horse breeding. They celebrate it with a huge party. 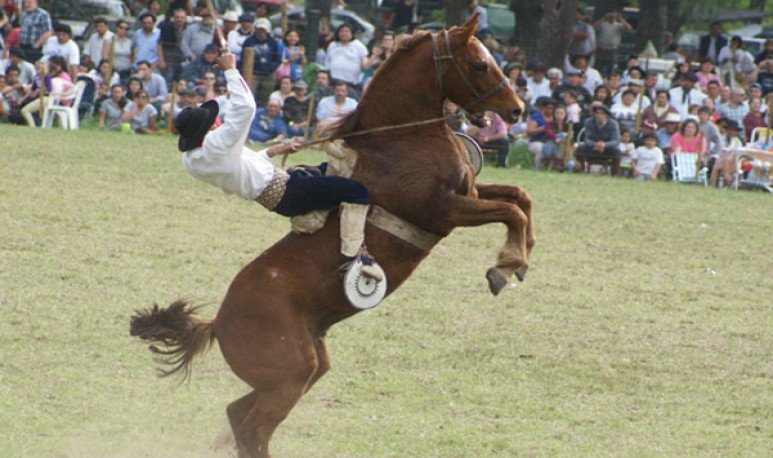 The National Horse Festival is a traditional event in the San Cristobal city of San Cristobal. Organized by the local  Rural Society  since 1968, the purpose of the celebration is to host a meeting between equine producers both at regional and national level . The exhibition includes the presence of multiple specimens and specialists in topics of the field, but also of musical groups, dance and typical gastronomy of the locality.

The initiative to hold a regional meeting between equine producers  dates from the early 1940s.  The development of the first exhibition in 1943 was the initial kick that positioned the town as a central reference in the field. Over time, the exhibition grew to the degree of National Holiday thanks to a presidential decree in 1968. In this way, the effort of breeders in the continuity of a traditional activity for the city was recognized.

The property of the Rural Society of San Cristóbal, called “Matero Tío Cacho”,  is the place where the holiday takes place. At the inauguration, the authorities of the institution give the words of welcome to all visitors, in conjunction with the mayor of the Municipality and other political leaders.

From some time to this part, the organizers decided to  impress a more cultural and social character to the event , in addition to continuing with the traditional equine exhibitions and the election of the “Queen of the Horse”. This was one of the novelties of the latest festivals. That is why in recent editions, musicians,  photographers  and painters come together in the facilities of the Rural Society from various locations and places in the country.

The festive event also has a significant moment where different ballets demonstrate their art on stage.

They show what they know how to do very well

Skills and demonstration with equines is an important part of the event.  Rodeos and riderers share prominence with the exhibition of Polo and Horse Riding, generally held by the School of Equestrian Sports in the city of San Cristóbal. But also the Blue Squadron of the Federal Police  parades  and demonstrates their equestrian skills through the premises and the streets of the town. Meanwhile, along the main arteries of the village, the equestrian parade of gauchos dressed in typical outfits provides all the color and warmth of a traditional fact, as well as the  stands installed for the public to acquire different handicrafts and taste typical dishes.

The name San Cristóbal comes from the owner of those  lands  purchased by the provincial government, Cristóbal de Murrieta.  Since its founding in 1890 , over time the arrival of the railway and the installation of a military detachment dedicated to equine cattle have been directing livestock production towards this specimen.

The expansion of the equine holding resulted in the multiplication of production rooms and the presence of different agents associated with the polo and creole horse business.  Patient and hard work by the owners of the cabins has made it possible to preserve the production and multiplication of breeds such as the  Argentine Silla, Criollo, Paso Peruano, Percherón, Cuarto de Milla and Arab.