Home Argentine Traditions Pulperias: the Gauchos made us neighbors

The center of social life of the Buenos Aires campaign of the nineteenth century, several pulperías were the starting point of neighborhoods, towns and cities. 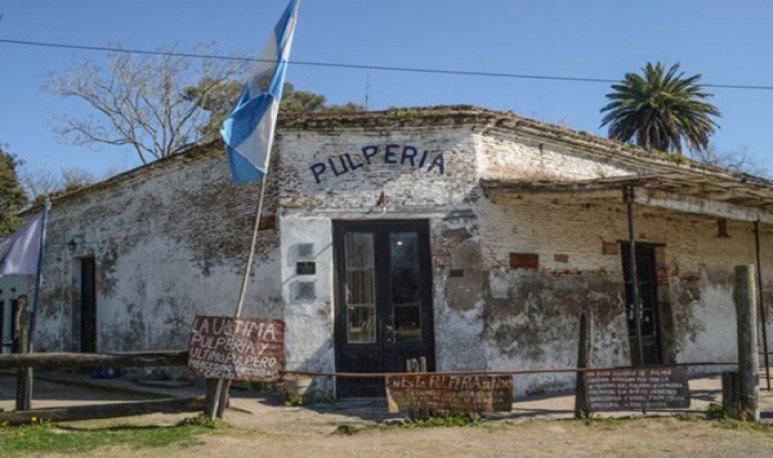 “We needed a bowling in those payments, because it was quite a job for families to go more than twenty leagues... but they were so poor people,” said Godofredo Daireaux in La “Pulpería modelo”, etching one of them around 1870, and that gathered “bums, intruders, deserters, bad gauchos, boladores, no more treasure than the tropilla or more random resource product of hunting” This French landowner, who was then a great teacher, listed the scarce goods of the office, brandy and wine -just in abundance after 1830, with Cuyo's products - biscuits -the bread was never from gaucho, some fabrics, yerba, tobacco, ponchos that came from the north and the Paraguayan chaco, and certain basic utensils for working in rural rusticity, facones and tools. But above all Daireaux understands pulperia as a necessary space for socialization and recreation in these remote places, and also economic engine. Godofredo himself, also a journalist and cultural diffuser in the nineteenth century of Creolism, established several storages/pulperias on the Pacific railway line and participates in the foundations of Rufino, Laboulaye and General Viamonte. Despised by official history, the precarious pulperia responded with astonishing efficiency to the demand of Argentine pioneers, of all classes and races, of all trades and records for almost two hundred years. Material goods, desires and social demands were their imaginary foundations — and a little more.

The prehistory of pulperías begins in Alto Peru, “the corners taken by pulperos”, in a sixteenth century colonial Lima postcard.  These first pulperos, a designation to the retail trade derived from the exclusive sale of Pulque, the mead of the Aztec gods, were mostly Creole commoners with capitals of military and Spanish officials . Prices were at the pleasure of traders, who bore strict charges from the Latin American Cabildos, and, in most cases, received spice payments, also regulated by the authorities. In the Viceroyalty of the Rio de la Plata, the coin was practically not known until 1800.These are the times when the leather industry and salts in the pampas and the Littoral drive a gradual increase in population, food shortages, and governors are pushing for a cash economy that prevents in these small shops that with lettuce plants can buy a chicken. Finally, a side states that pulperos will not be able to receive payment in merchandise, intimidating orchards thieves and, at the same time, drowning any attempt at small Creole farms. In addition, they are forced to set up close to cities to improve tax control.None of this prevents them from going from 284 in 1814 to 490 in 1817.  One of the reasons for the success of the pulperia model is the profound need for commercial exchange points, and socialization, in a homeland that remained large and concentrated in the overseas ports of Buenos Aires and Entre Ríos.

And they bloom especially in the border villages, “in the shelter of the roundabout, were piled poor countrymen, cane and gin drinkers, masters of card and volunteer storytellers of moreiresca adventures - were already famous the wanderings of gaucho matrero long before Eduardo Gutiérrez's folletín, that the Galleguito dependent listened behind bars with his hands on his jaw and his mouth open,” recalled Javier de Viana near Choele-Choele, Río Negro, on a quote from Ricardo Rodríguez Mola, before the self-called Conquest of the Desert. Even there still appear mobile pulperias, with brandy, salt, sugar, tobacco, yerba, some knives and cheeses, no more in a cart, in a remnant of the origins in the barter of pulperías.

“The creoles, at the swirl of dance and the repeating of their heels, raised clouds of dust that made the old man in the foals growl deafly, and the milics sang cheerfully following the band's music,” Gutiérrez narrated in “Sketch and military silhouettes” about a dance in the doors of the pulperia, with the horses tied to the palenque - “ that was a parenthesis to the tremendous life of self-denial and fatigue that is synonymous with the service of the border, and the poor milicos wanted to squeeze to the last juice” , closed of those milicos, rather gauchos of poorly militarized forced cams, before General Roca swept Patagonia with the  Remington  rifles of the Argentine Army.

The pulperia, the heart of the Argentine campaign in 1800

It was an unavoidable space for the gauchos, who came into contact with that reality that perhaps did not go more than a few leagues, and of the pawns and their Creole families, then immigrants.  The pulperia was a true sentimental school of Argentine customs and customs . There they learned popular dances during rosism, cielito and mediacaña. Or the gauchitos their first strummers on guitars. Rural workers also discuss the latest developments in urban centers by reading newspapers by pulperos, as recorded in numerous chronicles and illustrations. The tenths of the first gauchesca, in the form of clowadas, or the popular editions of “ Martín Fierro” , were the artistic material — and ethical — that would be transmitted in the dusty roads, and from generation to generation. The authorities knew about this well, in sayings of a Justice of Peace of Chascomús in 1822, “As for the pulperías, I cannot omit that in them they are like offices or public schools where practical lessons are given of immorality and corruption of customs... the pulperum, for having obtained the leave, procures and encourages meetings in it... drinks... gambling, tabas and playing cards... man flees from work and loves leisure... a daily assembly... How many times the same city (Buenos Aires), when the country's first authorities pass through a pulpery, has been offended its respectable ortaken with these yawns of immorality and dissolution that infest the people all, yet disguising this corruption sanctioned with tolerance and time, whose power is very strong,” he ended up when they reached the thousand registered. In less than twenty years they would exceed three thousand, being in the case of Buenos Aires the land of birth of neighborhoods, between humble mud walls, Caballito, Pompeii, Barracas, Liniers and many more. Felix de Azara would point on the gauchos in the pulperia, “it is his custom to convid the present passing the glass from hand to hand, and repeating until the end of the money, taking to wrong not drink being treated”, in a social rite that points out the detached character of the gauchos, and their little attachment to the constant and sounding “I'm too poor to work”, that's why Darwin criticized a countryman when we were visited in 1832 without understanding the social and legal marginalization that oppressed the humble in the Argentine countryside.

The control of leisure and leisure time, in the combo of disciplining the “vague and ill entertaining”, intensified from the colony, it was forbidden to “pronounce dirty and dishonest words” under the penalty of lashes reserved for gauchos, mulattos and blacks, or the violent exclusion of women in the pulperías of 1788, to a new state more repressive towards the pulperías with the United Provinces of South America and the Argentine Confederation, with hundreds of sides and laws, until “prohibit children and young people from attending pulperías and preventing them from sinful passions ” The priests ranted daily in the pulpits, “-the pulperías - shelter many people on the night of fandango and dishonesty . To feed these vices they need money, but the usual laziness is an obstacle to occupation and work and they throw themselves unmoderately into the goods of the poor landowners,” many of them the main producers of alcohol in the country encouraged by Rosist protectionism.

The economic context after Caseros was replacing the liberrime gaucho with the docile field pawn while society hardened the rules to guarantee the workforce.  Since 1880 the pulperías begin to rapidly change their physiognomy as the surrounding villages grow, railroad and  immigrants  by, “they bought more bread than cookies, bags of seeds and plows, not  errands and charons ,”  said a pulpero in the way of becoming a storerman of general branches in Bragado, “very little talked about animals, rodeos and stacks... everything was talk about wheat, planting, harvesting, business; it seemed that almost no longer knew what races were” And by the end of the century the “parishioner who after buying a silk scarf, or silver stirrups, or sifted underpants, wanted to soak his throat,” said disenchanted Carlos. María Ocantos, “I had to leave the store and surround the house” described the author of “Between two lights”  the last glare of the pulperías where everything happened, everything was learned, in a flash of the Cafetín de Buenos Aires to come.

The pulperia, the heart of the resurgence of the Argentine campaign in the 2000s

The Francisco, Dinorah, Germán and Fernanda in the Gardey, Payró, Hirsch write new pages, new encounters, in the  Buenos Aires pulperias .  You abandon for decades, an inexplicable Argentine progress that turned its back to the deep field, topping soy and raised roads, and its villages to the truth of the metallic rivers, it is the new generations who set up pulperías, national pride  “On the corner where he finishes the pampero and the dirt road becomes gaucho destination”,  recounts Leandro Vesco in his essential human map “Unknown Buenos Aires. Historias de Frontera” (Editorial El Ateneo), “is the San Francisco Warehouse, an adobe ranch that at first impression produces a feeling of nostalgia, love and joy” There the journalist finds in Samanta, his owner, who offers “what is eaten in the houses of Roque Pé rez” And while cutting a portion of bondiola, reflect with the happiness of providing delicacies and hopes to an area where stores abound, La Paz, Querencia, Lo de René, El Gramiyal, La Perla, Lo de Juana, El Descanso, La Paz Chica, La Estafeta, suckers worthy of the old pulperias, &These spaces are the identity of Buenos Aires, where migrations, rurality combined with a relative proximity to the port, have made us as rare as we are, but with a very interesting multicultural identity and deserves the safeguard” It has been said.

These modern pulperos, who not only with their efforts sow community ties but encourage the work of peoples, many condemned to disappear, sometimes continue traditions, Juan Carlos, fourth generation rural dispatcher in Mira-Mar, or others who armed themselves from scratch to pure work, La Montaña.  Today is the past challenges us Vesco. And in the best national traditions, we retrude, the pulperia, beats the Argentine being.