The city of Cipolletti celebrates 117 years of its foundation. 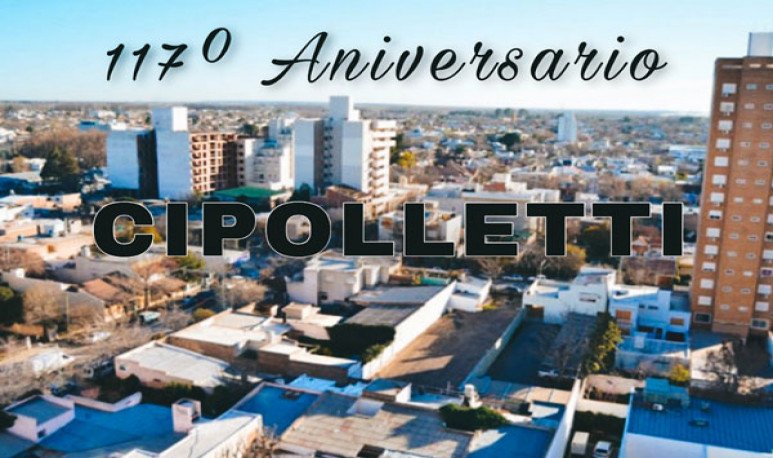 This Saturday 3 October the  rionegrina  city of Cipolletti celebrates the 117 years of its founding.

It was Colonel Fernández Oro who, with the intention of installing a fort  at the confluence of the  Limay and Neuquén rivers  ,  founded what was originally called Colonia Lucinda.

Six years later, its name became the current one given that it was called the railway station established in the city since 1904. His name is in tribute César Cipolletti, the hydraulic engineer who conducted studies in the region that gave way to the irrigation system used in production in the  Alto Valle del Rí or Black .

It grew its early years on the railway and over the years it became one of the largest production centres in the region , and it was also a forced step by its strategic position. Today it is a thriving city, inhabited by about 80,000 people, constantly growing.

The confluence of the rivers and the layout of the routes favor its potential and made it a town with an important tourist movement not only because of its natural beauties, but for its historical value with space for all tastes and ages.

One example is the  Paseo de la Familia,  which has an area of about 5 thousand meters where there is a sports playon, an amphitheater, a waterfall and the playground.

There are not a few who seek to clear themselves in that space sharing a mate or traveling in solitude throughout the year, in the afternoon and at night in a quiet environment.

A city that played in first

Club Cipolletti is the most popular in the city  and one of the great ones in Patagonian football that managed in the 70's and 80 to elbble with the big ones by playing different editions of the National Tournament, before the arrival of the short tournament in the Argentine Football Association.

The “Foreman of Patagonia” was one of the few teams in the region that reached the  first division  and, after his years of glory, was a tough rival in the then First Division B National. After years of ups and downs, he currently plays in the Federal A Tournament (formerly Argentino A) and remains one of the most popular  Patagonian teams  .

Demonstrating the diversity of proposals that the city has, the  Casa de la Música , where the local culture unit operates, has a building that in its room can accommodate 400 people and becomes a stage for artists from different branches.

Here we combine samples of plastic artists, musical performances, plays, choirs, dance, murgas and all the artistic expressions of the city, together with that of neighboring localities that found in the Casa de la Música an ideal place to perform.

Jordan Island  is the resort to which every inhabitant and every visitor of Cipolletti should go. In summer it is the obligatory place to fight the heat and during the winter it becomes an important recreational center.

This is a space in which an important channeling of an arm of the river was carried out to enable water to flow smoothly into leisure clubs.

The tourist proposal of the city is completed with visits and tours of fruit packing sheds, cider houses and  historical museums, such as Carlos Ameghino , located in a property that belonged to the founder Fernández Oro. There you can find founding material of the city as well as fossils.

Over 117 years, that small colony became one of the most vibrant cities in Rio Negro, with a rich history and varied proposal for all types of visitors. Although this year the celebration will not be the same, the city deserves its greeting. It is not hurtful to send the salute to the neighbors.  Happy birthday, Cipolletti!