The Paraná counterfeste is an event that was born to react to the formerly known “Day of the Race”. 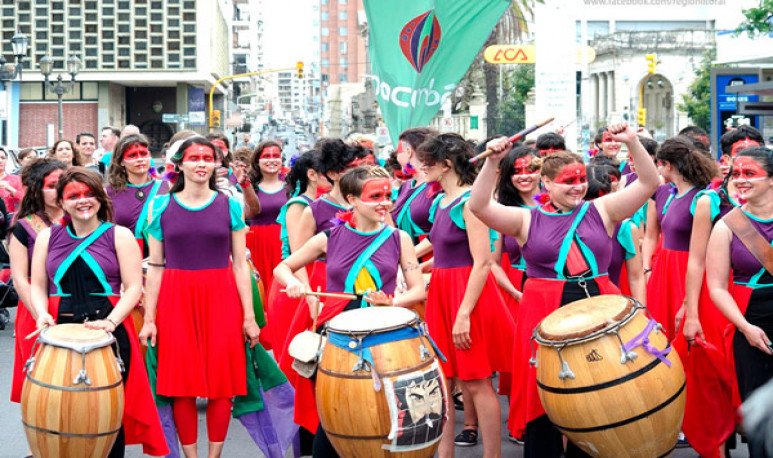 Every year, a section of streets in the Entrerrian capital is dyed with  candombe,  colors  and smiles . Paintings on the faces, children running around and people dancing everywhere. Flags that unfold on top, messages of struggle and the  scent of diversity  that can be felt in the air. The appointment is always the  weekend prior to October 12  and becomes an unparalleled plan.  The counterbalance attempts to make visible some aspects of the African and indigenous cultures that existed in the area before European colonization . It is a manifestation where   art  and resistance are combined  to become one.

Its organizers define it as  an attempt to foster a space for collective reflection . It also maintains a deep vocation to  revitalize our  identity  without omissions or distortions . This means that it  fights neoliberal globalization, selfishness and marginalization,  but  through  love  and rhythm  . It does so in the conviction of  respect for the different ethnic groups and in the pursuit of national multiculturalism , which provides equal opportunities. Therefore, we can hear the drums invade the Paranaenses corners and watch them advance in powerful columns. And among the crowd we see coming out to the certainty that the construction is strengthened more and more.

The counterbalance was born at the  end of 2002 , when the country was going through a very special moment.  In a context of crisis and social boiling, the idea of a legitimate expression of new inclusive thinking began to emerge. It was also intended to be an  annual sample of the first drum string in the city, “Tambor Nation” . Which depended on the Afro-Uruguayan Candombe School. In this way, it was decided to make a call that would go through the  old Barrio del Tambor . The latter was a  settlement of Afro-descendents from the middle of the 19th century  near the Church of San Miguel de Paraná.

The event was growing in call and other artistic and cultural movements, trade unions and people who enriched it joined the organization. As for the date,  the previously called “Day of Race” was the ideal pretext for counterfeiting . Thus, it was intended to combat the concept that America had benefited after the discovery of Christopher Columbus. In this sense, the celebration aims to remind us that Argentina was founded on the sacrifice and genocide of indigenous peoples. But also about Africans brought as slaves to the continent.

The scenarios changed over time. At first, the counterfeiting took place in the  Baucis Passage , a special place in the capital with cobblestones and colonial cobblestones. In  2007  he moved only to the  corner of San Martín and Buenos Aires  streets   . It happens that the Passage had drawbacks related to capacity and comfort for the number of people, which was increasing. For these reasons, he left and returned from Baucis several times in his later additions.However, in 2019 he moved to the local New Port  to honor the cultural diversity along the  Paraná River   .

Counterfesting is organized in a  self-managed and collective manner. So all decisions are taken together and with the greatest possible participation.  During all his years of history on the street he never lost the central axis that mobilizes his struggle . That is, the cultural claim of the rights of people of African descent and indigenous peoples. Through music and candombe, it became a tool that connects us with our ancestral roots.  A unique moment of the year, when drums start to sound and joy and dance take over the city .