As a repeated figurine, the artisans fair in the city of Paraná does not age and beats strong in our hearts. 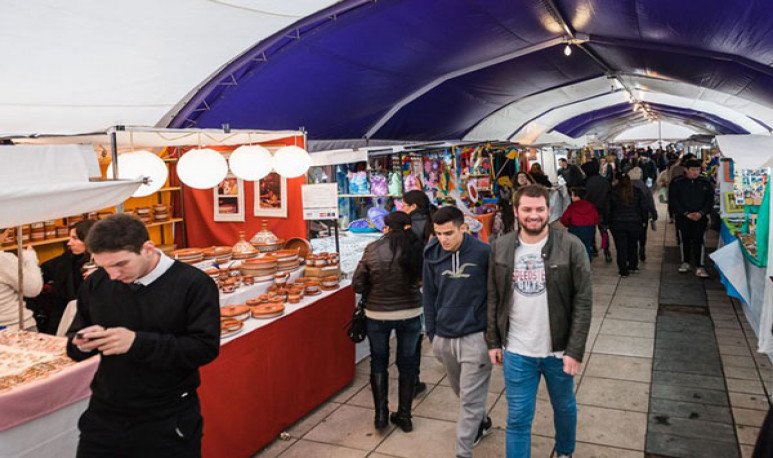 We could consider it as a simple visit, but  it's much more than that . Previously it was performed in the Pedestrian San Martín, then in the Plaza 1° de Mayo. Subsequently, the Municipality moved it to a sector of the lower coast. At the Port to be more accurate. The  artisans fair  is full of people from other sides, but in the  capital entrerriana  it has all its  identity . One that is not erased.  That mixes the old known with reinvention .

Thus, every year we can see irons, which are then covered with tarpaulins to finally turn into tents. That's a hundred of them. One after the other, they do not allow us to visualize where the tour ends. We meet her at least  three times a year : July holidays, Easter and Christmas holidays. Even, some other Children's Day also had his presence.

“ What are we doing this weekend?What if we go to the craftsmen? ”,  are recurring prayers  among families,  friends  and couples. This is not a place where paranaense is going to buy, but rather to  share . It's a  tradition  we all  grew up  with. Since kids we're used to our parents taking us on a walk.

After, getting bigger, we repeat the sequence with other nuances. Also, it is a  good maze  to sink into when you are looking for  a moment alone  . Of course, the products displayed are part of the  appeal . However, its  special essence  lies in that it unites us,  finds us  .

Outside there are countless  food stalls , especially  street vendors .  “ Garrapiñada, cotton candy,” you can hear them  sing like a song . And you see them in the distance, with pieces of celestial, yellow and pink clouds inserted into a thin wooden stick. It's easy to remember because they usually have some splinter that puncture your fingers. Although it doesn't matter, because  they taste like childhood  and that moves.  Breads with chicharrones, churros and  fried cakes  are also available. Fortunately, access with  food  is allowed. Otherwise we would be lost.

It is never possible to decide where to enter . It can be done from either end, or directly in the middle. Locals know how to be strategic with schedules so we don't encounter the collapse of people. Although there are those who choose to go on a Sunday to do social.

In the crowd we will observe more than one  known face , we already attend with that idea. Either way, it feels  comfortable . The  scent of incense  abounds in each stretch and  the loud murmurs  stick to the ears. It's true that sometimes he gets stunned. But clearly it is something we can live with, but we wouldn't even be willing to step on its ground.

Elementary and decorative products  Entrepreneurs and starters from other provinces willing to tell their  stories  enthusiastically. Let us not talk about the  precious stones  that shine with their  vibrant tones  and powerful energies. Each with its various properties and set in alpaca or silver arrangements. Hand-painted paintings  , jellies  of all tastes and roast boards with the  most original motifs.

It is  difficult to  go out  empty-handed  after so many proposals before our eyes. Craftsmen are available throughout the day. From the morning until the last hours of the night. But everything has an end and as they arrive, they leave . We say goodbye to them with the joy that we are going to see each other again.  And that's what it's going to be .