Strawberries are the main pride of Coronda, a town in Santa Fe that pays tribute to them. 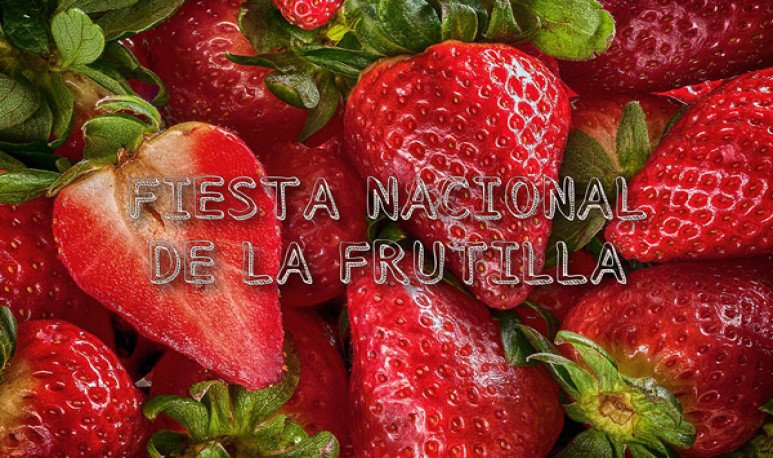 You probably already read on this site that  Coronda , the beautiful town separated by 25 kilometers from the capital of Santa Fe, is the Argentine strawberry capital. Also  famous for hosting one of the main water marathons on the planet , crowns are masters in the production of strawberries. That's why it's not unusual for them to host the National Strawberry Festival. Find out in this note all about this great event in the interior of Santa Fe .

In 1946, the Cooperative Society of Farmers of Coronda decided to create a holiday  called “Regional Fruit Sample”, in order to account for the work and results accumulated over the years. With the support of the Argentine Agrarian Federation, in its first edition the central act was linked to the election and coronation of the queen of fruits. However, for years the celebration could not unfold again, due to a number of problems. It was only in 1957, from the founding of the Union of Entities for the Progress of Coronda, that the festival was recreated. A year later, under the presidency of Arturo Frondizi, it reached its current name and national character.

During the days of the event, the inhabitants dress the city to party. Shops,  factories , packing and destemming sheds and quintas become the centers where preparations begin, in a climate of camaraderie and joy. Its main arteries, the waterfront, squares, the municipal building and the Expo-Frutilla are the areas, places and spaces where most of the activities planned by the organizers take place. Scenarios, seats, lights and sounds are set there. Various artists, speakers and speakers demonstrate their art and knowledge about the work related to strawberries.

Music is one of the main moments of the day. There are groups of national renown, but also local, where it often involves for its own trajectories the first time in front of a large audience. In addition, the organizing commission stipulates  popular dances , the performance of the Symphony Band of the Province Police, volleyball tournaments at the Central Club of Coronda, a car raid old and various traditional competitions, such as balers and destemming machines.

The choice of the queen of strawberries is what most public summons. After cutting the ribbon in charge of the present authorities, the reception of applicants for national queen and the invitation to the former elected queens begins. Then, there is a parade of the candidates along one of the main streets of Coronda: San Martín. The day before the end of the party, during the sunset, the jury chooses the candidates, on a night that will warn a fireworks show. Sunday is the last day of the holiday. There the Expo-Frutilla site opens to the public, closing hours later with a popular dance where all the inhabitants and visitors enjoy. It is the joy of commemorating the work and effort of the whole year.

Coronda is reached by the famous national route number 11 and also by the always comfortable Santa Fe-Rosario Highway. From Santa Fe capital you can get there in less than  half an hour.

There are currently five factories in the city that process strawberries. The destinations are several: ice cream parlours, jams, pastries, yoghurts. Also, in the lands of Coronda, other fruits such as peach, plum, orange, sucker, zapallo, sweet potato and quince are produced. Get closer to knowing all this! The national holiday is the ideal time.