This tradition is a celebration prior to the banishment of the carnival, which this year will be on Saturday 2 March. 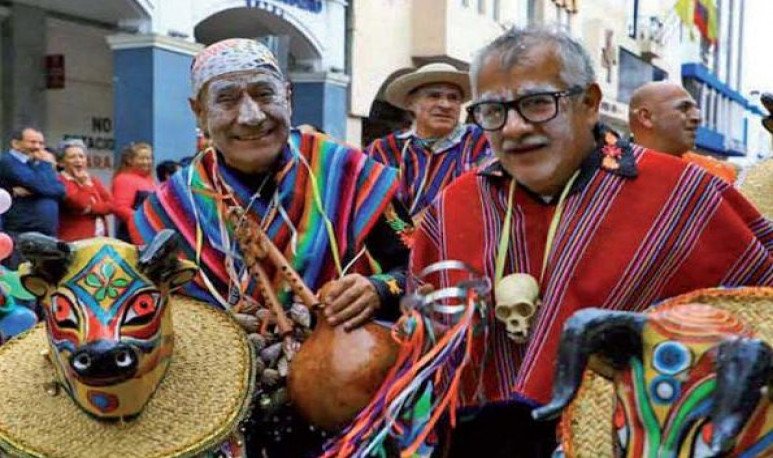 The Jujeños celebrated last Thursday the traditional “compadres Thursday”, a festive meeting of friends and family who offer each other as godparents of their children, a cultural event that is presented as a preview of the banishment of the carnival, which this year will be on Saturday 2 March.
During the morning in various family homes, clubs, traditionalist associations and comparsas began meetings in which they began to listen to local folk music, accompanied by abundant chopped paper and the aroma of basil.
The compadres on this day from the morning exchange greetings, adorned with talc, colored streamers and in the Quebrada de Humahuaca they dance the streets of the villages to the tune of carnivalitos until they bet on the meeting place.
“ The Thursday of compadres is a meeting of friends of the heart who share this day in order to vindicate the union of friendship that occurs in everyday life,” the Purmamarca singer Tomás Lipán told Télam.
The artist revealed that men are called for this day — which is part of the internal calendar of Jujeños — to “thank Pachamama (Mother Earth) to flourish, share anecdotes and in many cases small encounters with joy and folk music are formed”.
For the Quebradeño “it is time to renew the accompaniment between peers at different moments of life, always wishing for the well-being of the other and the godchildren”, while it is ideal to form “new compadres”.
With the flags in the wind outside the meeting centers, members of the La Unión, La Cuadrilla de Cajas del 1.800 in Humahuaca or Los Pocos but Locos in Tilcara and the Casastchok in Maimará, are preparing for the festival of the big carnival.
In the farthest places of the urban centers the compadres travel several kilometers between the hills of the Quebrada or in the immensity of the Puna to arrive with their chicha to visit their friend and share a sack of coplas.
In the afternoon in the various places of celebration, the lines of dance to the sound of sayas, taquiraris, zambas, chacareras and dancers were appreciated and then moved to tropical rhythms, quartets and other popular genres.
With compadres Thursday a path is created that leads to the arrival of the carnival, in seven days the wads will celebrate their day with the same or more intensity, in what constitutes one of the most consolidated customs in Jujuy.
On March 2, the province will dress as a party and colour to unleash the carnival celebrations that gather thousands of people among sympathizers of each comparsa, visitors from the country and abroad.