In Humahuaca there is an intact tradition after years of celebrating the Feast of the Virgin of Candelaria. 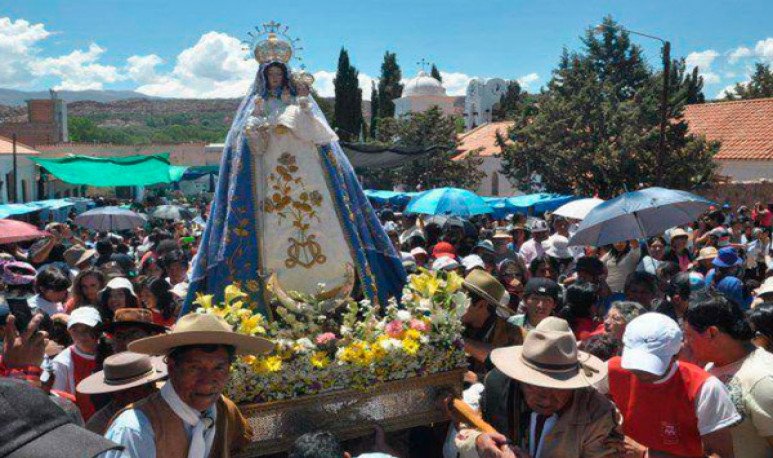 It is the oldest known celebration in Argentina and dates from 1634, the same year the founding of the Brotherhood of the same name. Every year it is celebrated in Humahuaca, Jujuy province, keeping the tradition intact of its celebration. She is known for being the patron saint of Humahuaca so an early mass is offered there. After the ceremony follows the procession and then the Virgin returns to her place in the cathedral  church  .

On the current image of Our Lady, they have referred to this as one of the copies of Our Lady of Copacabana, made by Tito Yupanqui. The Virgin of Candelaria as it is called in Jujuy also receives other denominations such as Virgen de Punta Corral, La Stella Maris, Virgen del Cerro and Virgen del Socavón. The image of the Virgin of Candelaria differs by carrying the Child Jesus on her left arm, a lit candle in her right hand and a basket of  flowers  or pigeons on the same arm. This corresponds to the significance in how they presented the Child in the Temple after the forty days as the law indicated.

The celebration of the Patron Virgin in Humahuaca

Every 2 February all Humahuaca dresses up to  celebrate  its patron saint: Our Lady of Candelaria. The night before the main day, the faithful gather in the cathedral parish and in the parish hall, carrying a candela in their hand.

In the streets, multiple groups fill the atmosphere with cheerful songs, highlightening their banners with the  name  of the band to be differentiated. At the end of the same, the bands head towards the Plaza de Humahuaca, each of them being located in a different place. There they will wait for the beginning of the vigil.

An unparalleled algarabia invades the villerinos among laughter, food, drinks music and typical dances. At this point, the promisants are dressed in frames filled with rockets. It is the so-called dance or dance of the torito, while fireworks explode in their garments they dance to the beat of music.Adults, young people and children applaud such feat. With the thundering of the rockets, the zero hours are announced, the beginning of the main celebration, and therefore the unparalleled rampant will end in the early hours of dawn.

The celebration begins at the Monument of Independence on February 2, presided over by the Bishop of Humahuaca and the Bishop of Jujuy. Members of the clergy of both dioceses also participate. After it was celebrated, the procession begins, which will tour the town. The bands again begin their accompaniment between joyful songs and melodies. Gauchos who arrive from different parts of the province of Jujuy also join the accompaniment together to the faithful. The image stops at different points along its trajectory, mainly on streets with crossings or boundaries between neighborhoods. In the resting points the bishops bless the faithful. The latter throw chopped paper, flower petals and rockets, among happy and incessant melodies.

Back to the starting point, some highlights access the interior of the main esplanade of the cathedral, the clerics close the bars so that no one exceeds the established limits. Between raised handkerchiefs, peppers, rockets and bells, Our Lady is farewell by the faithful. Already inside the church, the clerics sahumman with incense inside, depositing the image on the dressing room. In this way the festivities end. It should be mentioned that this day is considered a holiday without civil or commercial activity.

This is how the Patron Saint of Humahuaca, the Virgin of Candelaria, is celebrated with deep respect, happiness and cheerful melodies. Undoubtedly, a celebration in which the faithful exalt their hearts towards their holy mother.