A tour of the traditionalist centers, and the gauchos, in the opinion of specialist Maria Cecilia Pisarello. “The women of the campaign, real agents of Creole culture,” he says. 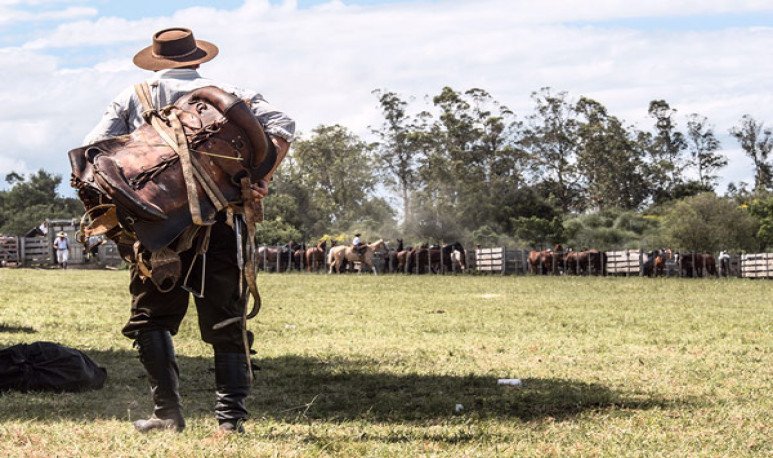 “My approach to traditionalism, and gaucho, occurs  in 1998 with the surprise of the success of the Peña “La Eulogia” in San Telmo. It was when globalization seemed to liquidate national traditions ,” recalls  María  Cecilia Pisarello , anthropologist and researcher at the National Institute of Anthropology and Latin American Thought at the Ministry of Culture of the Nation, and links the postcards, “it was very significant to me the number of young people and how they lived customs that I prejudged forgotten. So I contacted the  Circulo Criollo de Moreno and the Círcullo Criollo Martín Fierro de Martín Jáuregui, both organizers of the Pilgrimage Gaucha to Luján,  which takes place a week before young people, and there began my research on more of two decades on traditionalism and its institutions,” says the scientist who continues to work on the present of gaucho and creole sentiment in the two thousand.  In a special activity for Gaucho Day at the Hernández Museum, today he shares some results of hours of mattes, anecdotes and gauchadas with the main traditionalists of the country, Men and Women.

Journalist: What traditionalism did you find at the beginning of your work?

Cecilia Pisarello:   I ran into an Argentina I didn't know. Traditionalism is a living and uninterrupted phenomenon that is seen as inclusion networks. One feature of our traditionalism is that it extends from Mesopotamia to Patagonia, from the Pampa to the Cordillera. It is an inland phenomenon invisible to the porteños.  But from General Peace, traditionalist groups, fortines or nativist centers flourish.  In recent years they have had more visibility even associating with a calendar of popular festivities, although with their rules, for example as they participate in the family, and their animals, the most benign temperatures are sought for celebrations. Or that many people carry out  gaucha pilgrimages with a priest,  and when they stop in the schools of the villages, the villagers approach them to be read, for example, before the Virgin of Luján prior to the Mass of the Gauchos.

“ Creole centers are synonymous with brotherhood”

Q: There is a strong preconcept about traditionalist centers...

CP: First we have to discuss the myths, or prejudices, that involve traditionalist centers: that it is an armed phenomenon from the Rural Society, which defend a patriarchal, conservative and retrograde stance, or which are an anchor in a pernicious nostalgia for times gone.  In fact, gauchos centers mean a look at the future, the future of children, the family, the country . That is why in the calendars there is a commitment to historical memory, but not only from May 25 or July 9, but there are several dates that highlight the events, and heroes, regional. There is a regional popular festival, the Gaucho de Cuyo Day, which is celebrated in the middle of the desert, near the Laguna de Guanacache, on the vertex of San Juan, San Luis and Mendoza. There, on April 1, 1827, an agreement was signed between the gauchos who promised to defend the bonds of brotherhood. Today it is celebrated around a monolith with three faces looking at each province, and representing a man on horseback dressed in typical cuyano gaucho.

Q: Different from Buenos Aires than one imagines by default.

CP: Gauchos are very different depending on the area and not all are like Buenos Aires, that stereotype of the countryman with silverware parading on asphalt. And no, every region has its gauchos. In the Northwest area the goalkeeper is used a lot to protect the legs from the shins. Or in Cuyo, the plainclothes have embroidery and very striking colors. In our traditionalism the question is strong in regional. And yet that regionalism is subsumed nationally.  To be traditionalist is to be nationalist . Unlike Brazil, it has many traditionalist gauchos centers but all refer to the same area, to Rio Grande Do Sul. Instead in Argentina, the activities of traditionalists are linked to collective events that invite everyone to their Payments in festivals, horseback riding and pilgrimages, because popular devotion plays strong in these groups, or the patron's celebrations.  The nativist centers are moving from town to town in a sense of argentinity that unites them .

Other very important meetings are the Equestrian Festivals, which celebrates the bond of gaucho and horse. There emerges that image of the gaucho who participated in the Wars of Independence and Civil, then in the struggle of the Frontera, and was immortalized in Martín Fierro. Gaucho is also recognized many skills necessary to develop in rural areas. And a series of  arts  that traditionalism is responsible for transmitting,  saddlery, noguería  , creole silverware and traditional, and folk dances and inland music.

Creole circles play a vital role in securing our legacy.  Although not everyone has venues to carry out their task, they are finding the spaces. Even in villages where the train is no longer there is a very interesting move, and thanks to agreements with the municipalities, traditionalists recover the old stations with social action.

Q: Who is participating in these centres?

CP: Of course all the inhabitants of the place are invited, men and women, big and young, whether or not they are from the circle.  Traditionalism is very open and contrary to the prejudice that it is only for a certain group of people .  What you can see is that they serve by connecting knowledge and people, something that is not common in a society that compartments their leases and recreations between age groups.  Creole centers are synonymous with brotherhood.

Q: And what image do the traditionalists of gaucho have?

CP: Those who approach these centers also do so for admiring the archetypal figure of gaucho. A popular figure that people identify themselves although it has more to do with Creole culture in general. Today I believe that those who integrate seek to share a way of life in Creolism that exceeds the figure of gaucho. We have to think about what gaucho symbolizes today. And  it depends on each zone . In Buenos Aires the gaucho has been displaced in the field tasks with the inclusion of technology. But in Salta and Jujuy we see that the groups are really gauchos, many actually work in the field, and their participants are defined gauchos. They don't talk about gaucho as a character from the past. And they feel heirs to Los Gauchos de Güemes.

In other regions they are people who have the values of gaucho but in the daily one they do not dress that way or share their customs. But when they dress gaucho at the festivities, and pilgrimages, it represents a great honor and emotion. Sometimes they invest their savings on the best outfits and ornaments. At that time they do not dress up but recognize themselves children of the gauchos of yesteryear and proudly spread  a gaucha look of life. That is to be honest in how to deal with things, revalue the human-nature relationship, and give importance to that lost in virtuality, and the deterioration of human relations, we talk about the value of the word.

Q: We're talking about the gauchos, what about the Chinese?

CP: They played the role that women had at the time, and that was not so different from other social classes, or in the city. It is not that he was a minor but was invisible by historians and male narrators.  And the truth is that in order to face the harsh conditions of life in the countryside, at all times, very strong women are necessary.

I remember the story of the son of a woman who was the wife of a water judge in Jujuy, a public role played by those who distribute water in equal parts from the scarce ditches. The man had clashes with the village landowners who claimed more water for their plantations. And from one day to the next he appeared murdered in a ditch. They left a woman with nine children in the middle of the Puna. And she alone took care of feeding and educating all her children, and one of them today participated in a nativist center and could tell the story.  There are thousands of stories of women from the campaign, real agents of Creole culture, who on weekends could go from here to there with their guitar while in the week they were the midwives of the village.

At the same time, we must locate Chinese women, Creole women, who have been essential in transmitting knowledge and values. Let us think that men were almost not in their ranches, in the humble houses, and that it was in them to maintain the family nucleus, and to educate the children .

Q: Do they participate today in traditionalist and gauchos centers?

CP: A lot!  There are several Creole centers organized almost exclusively by women.  In Bahía Blanca we have one “Entre mate y guitarra”, a group of women who gathered on Saturdays to sing and kill in a square. Another in Sierra de la Ventana where women on horseback pilgrim to the People's Oratory. In Santa Fe at the Fiesta de la Primera Yerra, which recalls Juan de Garay's first vaccine marking in Argentina, participates a group mostly of women who met with the aim of preserving Santafesino traditions.

Orlando “Fito” Binaghi, a figure relevant not only for the Círcullo Criollo El Rodeo del Palomar but for all modern traditionalism , once said they wanted to appoint him president for his work by the Federation of Traditionalist Centers of the Province of Buenos Aires, that was an honorary title, and those who really worked for our traditions were the women who held the secretariats of the Creole centers.  If we have traditions a lot, it is because of the work and love of our Creole women .