Home Argentine Traditions Devotees of the “Mamita de los Cerros”, ready to embark on the ascent

This is one of the most important cultural events of the year for jujeños. 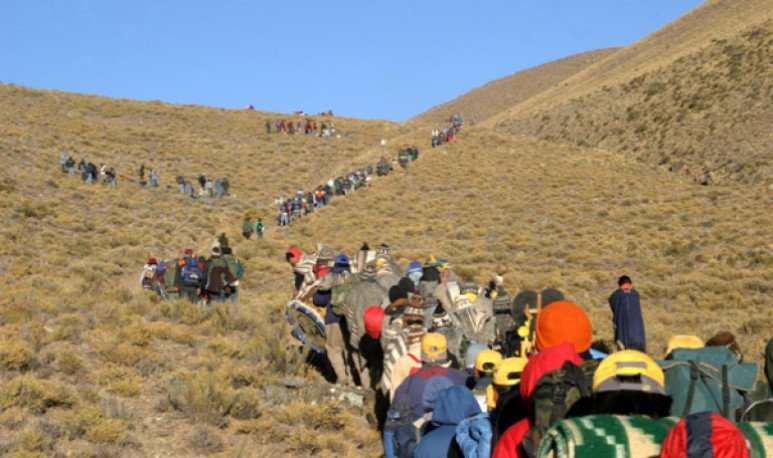 Devotees from the province of  Jujuy and  other latitudes of the country will start on Thursday the ascent to 4,000 meters between the Quebradeño hills to venerate as every year the  Virgin of Copacabana in Punta Corral  , image also known as the “Mamita de los Cerros”.

Prior to  Holy Week  jujeños will participate in one of the most important cultural events of the year, so authorities in the town of  Tumbaya  estimated that 80,000 people will join the procession.
Despite the low temperatures recorded in recent days at the summits of  Quebrada de Humahuaca , they assured that the four trails that target the site known as  Punta Corral  are in “optimal conditions”.

“From Thursday, the ascent to the hill will begin a parting of priests with hundreds of faithful to participate in the liturgical celebrations in the place where Our Lady appeared,” said Federico Galean, parish secretary of Tumbaya.
The pilgrimage can be done by four roads with different levels of difficulty that depart from  Tilcara , Maimará, Tunalito and Tumbaya, the latter locality is established as the base of the crossing of the minus 25 kilometers.
From this Thursday until next Palm Sunday, in addition to the faithful, about a hundred Sikuri bands will raise their prayers through the tones of the Andean winds instruments.

“The pilgrim goes with great devotion as they are interns and many of them are also promissant to the image of the virgin, which is considered a healing,” he explained to Galean about the expressions of faith.
On that point he commented that there are “many testimonies that account or attribute to  Mamita de los Cerros  healing terminal diseases or make different ailments disappear”.
Already at the summit, next Saturday at 20 will take place the central mass that will be headed by the Bishop of  Jujuy  Daniel Fernández, and next Palm Sunday, the day that the faithful descend to the town of Tumbaya, will also be present the images of the Virgin and Lord of the Miracle that arrived from the province from Salta.
In another order, for the safety of the parishioners, the Jujujuño government ordered to deploy an operation that includes fire personnel, the SAME, the Fire Management Area, the Emergency Coordination and the Argentine Army.

Health care plans to install five health posts along the Tunalito Trail, and in Tumbaya a field hospital will be established next to the local church, as well as tents at the first and second calvary and in  Punta Corral .In
case of emergency situations it was arranged that the rescues by Tunalito will be carried out on foot and in conjunction with the army and firefighters, while by Tumbaya the evacuation will be carried out with ATVs or motorcycles, which will enable an immediate descent.

Finally, to reach the sanctuary, the Ministry of Infrastructure and the Provincial Directorate of Water Resources, reopened and improved 11 kilometres of road, government sources indicated.