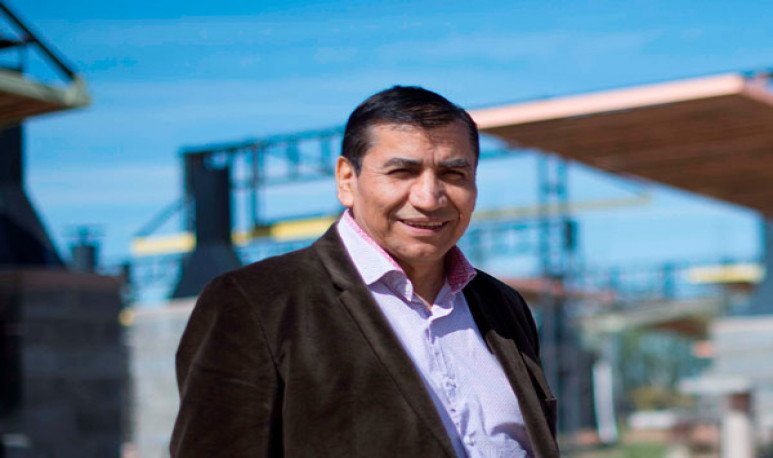 This October 22 is the  birthday of Cutral Có, an oil city emblem in the fight for rights . 87 years after its foundation, we reviewed history and current affairs and interviewed its current mayor, José Rioseco.

Neuquén is known for being a land of charming  lakes  and fertile valleys. In addition to the  tourist spots  and the planting of certain fruits, the main livelihood of the province is oil.  Tourism,  vineyards  and  oil  activity seem like economic activities.difficult to put together. However, there is this historic municipality, which points to the conjunction of the three.

Cutral Có's names varied until it was constituted as such: Barrio Dangeros, Pueblo Nuevo and Eva Perón were the names given to this portion of Patagonian soil.  The current nomenclature comes from the Mapudungun and means “fire water”.

The octagon of YPF was the demarcation of land for exploitation that gave rise to the inhabitants of this  number one well organizing themselves as a population. Who took the post in the organization of the first settlers (and therefore the founder of the village) was Dr. Carlos Zani.

The fact that put on the front page the second city with the most inhabitants of Neuquén, was the “puebladas”.  During Easter 1997, union and self-appointed teachers cut  route 22  in demand for improvement of their working conditions. Faced with the advance privatization that left thousands of oil workers without work and the definancing of health systems,  the struggle encompassed the entire people . The current mayor, José Rioseco, tells us that “the economic situation in the region was never easy, because it is very uneven what someone earns from oil compared to other items.”  The events of 97 were a fuse that ignited protests throughout the country and, to this day, poems and songs narrate the struggle of the Cutralquese people.

National Route 22 crosses the province and, through it, thousands of tourists head north or south annually for their holidays.  Cutral Có was always a place of passage for tourists, but it has more and more activities to make that step a little more memorable. In this regard, Rioseco says: “ We have to sharpen the ingenuity to reach the tourist and break the oil mold with attractions that, even with 10 minutes of visit, will record the name of our city to tourists”.

The mayor mentions the attractions of the city in perfect order of appearance. If you travel along Route 22 from Neuquén to the mountain range, “the first thing that comes to the eye is the  huge sculpture of Christ and the walk of the virgin, on the side of the route .” Then, at the exit of the village, you will find one of the largest green and sports lungs in the area “City Park”. Rioseco tells us the relevance of this one and, a little joking and another little seriously, notes: “To get a little wet in the summer, the inhabitants of our city must travel 50 kilometers”. Within the park, there is a view to reactivating airport activity and, in front of it, a technological pole that has been dreaming of building a huge wind farm for years.

Next to the airport,  the Municipality has 4 hectares for winemaking . When we asked the mayor how this curious initiative arose, he said: “The University of Comahue offers the technique in vineyards, which  allowed our young people to have one more option for their future.” This option came back in the form of necessity to be developed : “For a municipality to have its own vineyard in the middle of oil is something that attracts attention.”

In addition to Christ, another artistic and cultural point stands out in Cutral Có.  The city has a unique diorama room in Latin America. A handcrafted work but of very high quality, which unites painting and photography.  The director of these magnificent dioramas is the renowned painter Oscar Campos, also a native of the town.  “ The room consists of 13 very important works, from the Patagonian steppe, to the snowy desert landscape, to events and events  that have marked our town, such as the village,” says Rioseco.  This room is transdisciplinary  because “you approach the work you want and can not only hear a narrative about what you see, but also native music”

For all this and much more,  we greet Cutral Có on his 87th birthday and recommend that the fans of the mountain range “take a walk”  through the historic town.