Home Argentine Traditions Carnival of Monte Caseros: cultural identity that does not stop being resignified

Carnival of Monte Caseros, in Corrientes, combines history, colors, entertainment and native values. A chronological review from its beginnings. 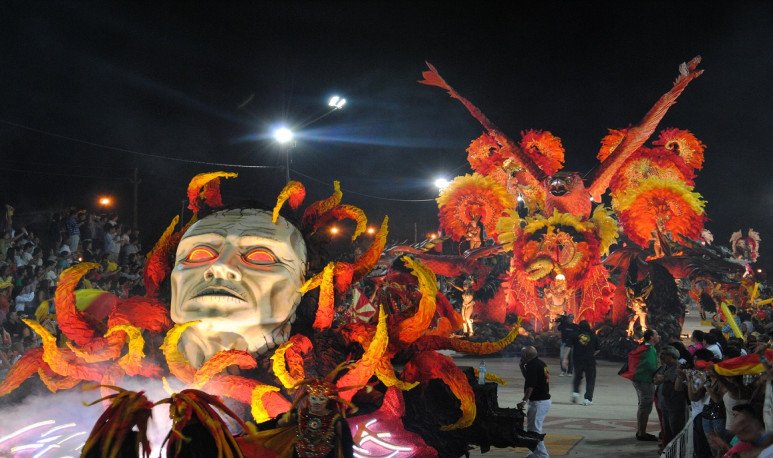 No one in town is willing to stay outside the party.  Carnival of Monte Caseros  is the  most important event in the city  and every citizen fulfils his role within the organization. Summer comes and on the streets the  rhythm , music and anxiety of their arrival begins to be felt. For locals it is a  spectacle of enormous  meaning   that transcends the dimension of entertainment. On the contrary, its realization exhibits native customs, practices and cultural manifestations. Throughout the year we work hard for the staging. Every link in the chain adds up, from members of the parsas, to contributing families or business merchants.

Monte Caseros Carnival began around the 1950s . The first scenario in which it was practiced was in an old square, and current water treatment plant. At that time, it was forbidden to play with water and only the use of chopped paper was allowed. While the event was held during the Montecasereña afternoon, between 16 and 19 hours, approximately. Then, in 1962, he moved to the mythical Alvear Avenue, with modifications in the route. In this sense, the display of the comparsas stretched over three blocks, from Calle Perelló, to Calle España.

Over time there were problems in terms of infrastructure. One of them had to do with the size of the floats, which were coming ever larger. So you had to lift the wires with a stick so that they, in turn, did not crash into them. The other problem was that the call began to increase markedly for the size of the place. So in 2000 it was decided from the organization to move the carnival to Juan Pujol street, in the Corsódromo “Ayala”. The latter remained as an official property until 2008. However, from 2009 onwards the current Corsódromo “Pasos de los Figos” was inaugurated, with its own place.

The Carnival of  Monte Caseros was able to be renewed through generations. For example, in principle they were masquerade  dances  . But since 1929 the celebrations acquired a more popular character, with encounters on the streets and where costumes were rewarded. Then, in 1930, the celebration took place in the clubs, presenting the queen of each institution. Finally, in 1945, the floats were assembled for the first time and paraded along Colón Street. This denotes that the concretion of event size has gone through various stadiums, overcoming crises and appealing to good times.

The comparsas were growing, trends were modernized and the symbols were resignified.  Traveling between tradition and new,  carnival  rescues the best of local identity to combine it with innovative . These aspects are reflected in the number of tourists who come to the city for a picturesque and distinct summer. Although nothing would have been possible without the push of the locals who strive to keep the celebration alive. Brightness, movements, handicrafts, heat and foam take over the landscape to show  who leads the show's baton .