Home Argentine Traditions Buenos Aires: An ancient Japanese ritual brought together more than 7,000 people to “leave behind the negative”

Buenos Aires: An ancient Japanese ritual brought together more than 7,000 people to “leave behind the negative” 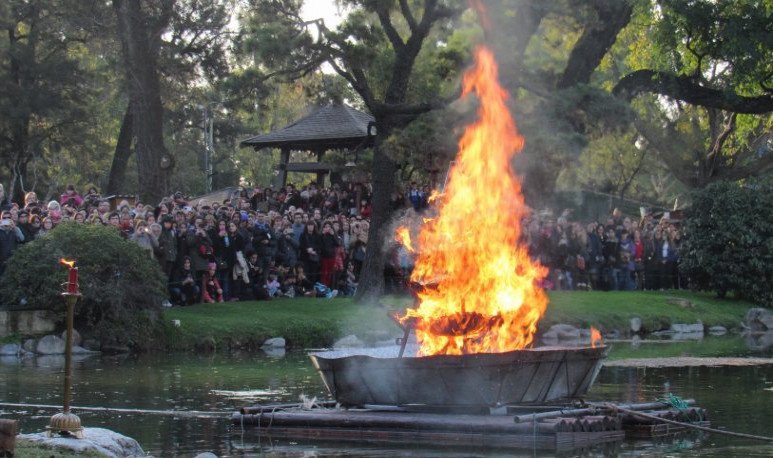 The tablets - with the Japanese inscription meaning Fire Festival- were deposited in the Metal Tree and through the Burning Ceremony held at 17 with the participation of the Mukaito Taikogroup, the fire drove away the negative to turn it into prosperity, good omens and positive energy. .

“ Drums are always present at all Japanese festivities,” said press director Sergio Miyagi in reference to the drum show that the groups Mukaito Taiko , with more than 20 years of experience and Ryukyukoku Matsuri Daiko dedicated to folk dances.

Miyagi said that 2019 “is the year of greatest growth” of the celebration “for the current moment inArgentina ” and that the main objective of the activity is to “strip ourselves of all negativity”.

“ The celebration is a classic and one of the moments when the audience accompanies us most,” said the press director.

Lidia and Mirta, who approached the Japanese Garden, and for the first time participated in this age-old ritual, said “that they want to part with all negativity”, but that the tablet “was a little small” for everything they wanted to write.

Ana explained that she wrote “personal issues” that she tries to leave in the past, while Lucia pointed out that she wants to rid herself of situations of “anxiety and stress”.

Mariano, for his part, said that his desire is to leave behind “the labor problems” he is experiencing.

Minutes before the Burning Ceremony took place and due to the large number of people who attended, the stock of tables that were delivered with the payment of the ticket ended and was replaced by little papers.

The jump of the maroma, a national amusement

Marcela: the story of a missionary tradition

Feria de Slaughterhouses: a sample of our culture