An auxiliary bishop of Corrientes received a curious gift as part of a religious tradition in the area that includes the word chipá. 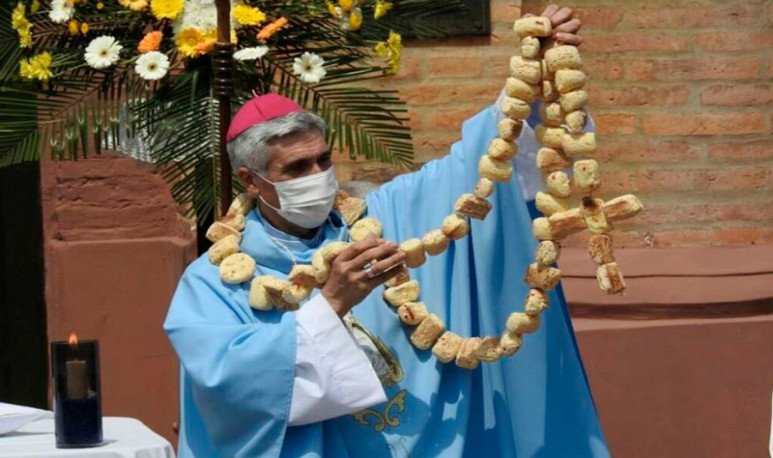 We know that  correntinos  are the  indisputable fans  of a particular meal that we like to enjoy on rainy days. Although it is so rich that there is not a certain moment to delight in its presence. It is that the  chipá  is an infallible recipe within the regional gastronomy due to its roots  Guarani  . With cassava flour and different cheeses, its aroma and taste drive people crazy. However, there is a  very little known ritual    that brings together such preparation with religion. This is the  chipá rosary  that every year  is given to  a  special honored  man. It is composed of numerous pieces and on top it  includes a complete cross   at the end  .

Ceremony of the most original

The Catholic celebration was held in the town of  Caá Catí , which is located in the north of the province of  Corrientes . While the event may be strange for outsiders, the reality is that the locals are more than used to it. The little rite is a custom carried out by the  devotees of the Virgin of Rosary, the patron saint of the place . In this way, the unusual religious object of Chipá  is prepared annually by a neighbor of the village  to give away. On this occasion, the distinction was made to Auxiliary Bishop José Larregain , who was also declared a butler and an illustrious citizen .

Currently, the name “butler” is used here to refer to  a person chosen for their commitment to the community . He is also entrusted with the preparation and organization of the patron saint's  holiday   . In the past, the feast of Our Lady of the Rosary had as butlers the most traditional families in the village. They took care of everything and the other family groups prayed for the first.  Now, the honorary office extends for a whole year so that tradition passes from generation to generation .

The ceremony of the patron saint takes place  every 7 October . This time, the image of the Virgin went out to tour the central square of Caá Catí with the countless faithful at her side. To do this, people were placed around the walk in order to greet and venerate it,  always respecting the social distance . The expected event was broadcast on social networks and in addition to the mass there was a parade of local riders.  The date represents a providential reason to thank, project and renew hopes .

Meanwhile,  the mayor of the town, Jorge Meza , delved into the unusual practice. He explained that the offering is an ancient custom of the religious holidays that are made in the countryside. He also said that the bishop was told that he  must return next year with a rosary of the same characteristics . There,  you will have to choose another butler  to take the post and continue with the historic legacy. In addition, he took  the opportunity to reaffirm the commitment of the city to tasty food  by having the  fiesta del chipá  . It happens that in the month of August there is a holiday that offers different dishes based on cassava starch.  Although the chipsteel syncretism wins by earnestness .