Home Argentine Traditions Blade, meat and grilled with the roast

We Entrerrians love the National Roast Party with Leather because it promises and never disappoints. Besides, our bellies dance with happiness. 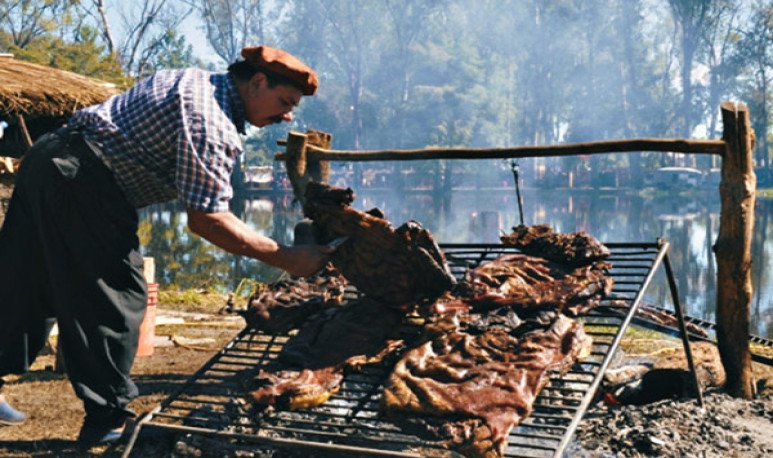 It is carried out every year and over four days of November. The special event is in the town of  Viale  and  attracts more than 25,000 visitors  . In this way, the Viale Foot Ball Club, organizer,  puts the repasador on his shoulder and always bet on more . The   National Festival of Roast with Leather   is today the  main gastronomic event  in the province of  Entre Ríos  . And it has been so incessantly since  2002 , when he began to propose to the region a  traditional and exquisite  proposal   . Thus, the celebration invites us to eat until it explodes and enjoy folklore between friends and family.

His recognition at the country level was obtained in  2013 , at the time of its twelfth edition.  The main objective of the celebration is to raise awareness of the culture and the  food  of Entrerriana . In addition, it stands out for being well autochthonous and conjugate in a special way the uses and customs of our Gaucho identity.

The party starts with an  inaugural fire   , which is lit as an opening, calling and summoning the steakhouse.  The most interesting thing is that it will stay alive until the culmination of the entertainments . In between, there will be a contest, which is the central activity, of which those who want to earn an important title participate.  There, they will have to try their dowries with meat, embers and  taste  . All in order to prove to be deserving of the prize of the  “applause for the rotisserie”  of the so-called  “National Roast Contest with Leather”  . Which is divided into groups, which have reached around thirty, so that the competition is pure fun and adrenaline.

On the other hand, the club's estate has room for everything. In principle, you can stroll around the area where the steakhouses are located, which are roofed quinchos.  But it also has a huge food court, exhibitions and stands with regional and commercial products . It is a good opportunity to take advantage of buying something typical to taste or take away as a souvenir. And we still have what happens at night: the same space transforms into the tables of the  folkloric peñas . Which will extend until dawn and leave no choice but to dance without stopping.

Not everything is roasted here, though. On the playing field is the  central stage , where  important music shows take place. This is a pleasant moment, which the public can enjoy outdoors, sitting on chairs or on the floor.  The number shows are renowned artists, both at the regional and provincial levels . Among them, we have the participations of Rally Barrionuevo, Los Musiqueros Entrerrianos and Néstor Cuesta, La Mosca, Cajale and Cazazazo and Nomeleskatime.

This  2020  the National Roast Festival will be held anyway despite the  pandemic .  It happens that, in 2019, the Viale Foot Ball Club suspended the holiday due to the political, social and economic instability that was passing through the country . Then, the organization decided to continue this year with the meeting because they consider that the city wants it. They also argued that they would put all the momentum and energy to realize it in mid-November, also the anniversary of the town. Therefore, the dates chosen were days  21 and 22 , under a  virtual or mixed modality .

As for the characteristics,  the celebrations will be transmitted via streaming , in order to get out of the overwhelming everyday life that we pass. In this sense, the traditional contest for the best steakhouse will be possible only with teams from the area. So it will not be possible this time the participation of other provinces and countries. The same applies to artisan exhibitions and musical performances. Although their mere celebration in these contexts is already an achievement and a glimpse of joy for the people.  So sharpen the blades, the National Capital of Roast Leather brings them all .