The duel between gauchos was the demonstration of who is the best. 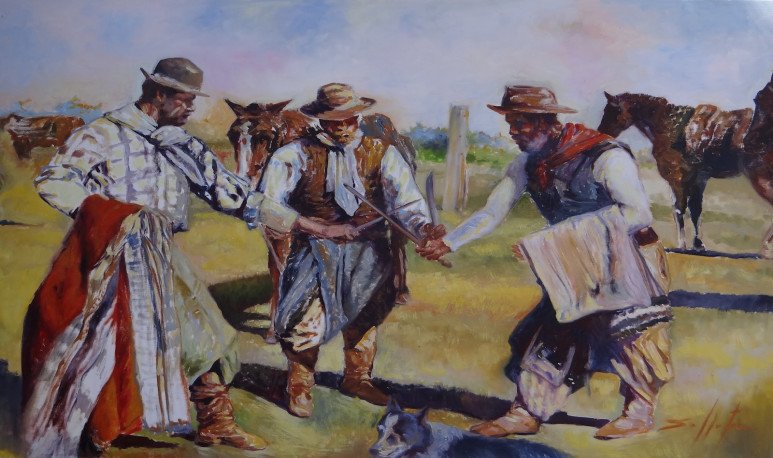 A good way to preserve our traditions is to categorize them and give them entity. That was how what was once considered a simple quarrel between  gauchos became an  art of combat when it was baptized  Creole fencing.  This discipline born in the pampas has its own technique, whose fundamental characteristics are the  visteo and the use of the  poncho , in addition, of course, the  facon ,    boleadoras  and  chuza .

It was the writer   Horacio Quiroga  — an Uruguayan who is perdidly in love with Argentina — who gave him the name with which he is known to this day: in 1906, he titled “Esgrima criolla” a photographic exhibition made for the magazine  Caras y masks . In this way, the word “fencing” gave the practice a certain status, while that of “creole” linked it to the land itself, a detail that the upper-class families of the time received with optimism, frightened by immigrant advance.Then, the duel between  gauchos ,   visteo , the  poncho as shield, the combat of  knives , the quick reflexes and the demonstration of who is the best, something that emerged in the deep pampas, today is preserved and taught as another sample of our  cultural heritage , of our essence, that we in no way want to let it be lost.

It was all a matter of honor

Why were gauchos dying to poncho and knife duels? The answer is  honor . When a man lacked his word, who was the most precious good of then, or somehow offended the other's companion or dishonored the subject himself, then there was reason for the contention. It was the most extreme way to clean morals, the good name of the parties. No more reasons were needed for grief.

A tradition that was transformed over time

First it was the gauchos, but later, the tango culture, of the compadrito and the malevos adopted a similar custom. These subjects lived on the periphery of the urban area, in conventillos. They were quarrel, bullies in his action. And just as the gaucho before, they found in the fight hand to hand, a way to save honor or to do justice by their own hand. They did not need (nor did they believe) in the politically correct intervention of mediators. Unlike the gaucho creole contest, they did not use the poncho to defend themselves from the attack. They used shawls (kind of fabric scarf they wore as an accessory on their shoulders). They used a knife as a weapon, and there was no need to kill the opponent. The “rule” was first blood, that is, the first wounded lost the duel.

No freedom, but defending the honor

It is known that this habit of confronting themselves in order to rescue morals was also adopted by the prisoners of that time. In that case, they adapted their weapons, both attack and defense to the possibilities of confinement. A sharp or cutting element in the skillful hand was always necessary to attack the opponent. They solved it with a faca (filed knife on the tip) or a harpoon that was a stick to which they added some kind of cutter on the tip or a spear, which was an iron they filed to hurt. As a defense there were no ponchos or shins, they managed with blankets and blankets.

It could become a sport

At present, the practice of Creole fencing has been transformed into discipline, under strict rules and adequate training. There are institutions that teach classes as if it were a martial art. And some of it has. His movements are choreographic and the origin is typical of wars, although they were street, the martial (linked to the military) was present.