This year the tree breaks structures in the city of Córdoba. A new Christmas tradition is inaugurated in La Docta and we tell you what it is. 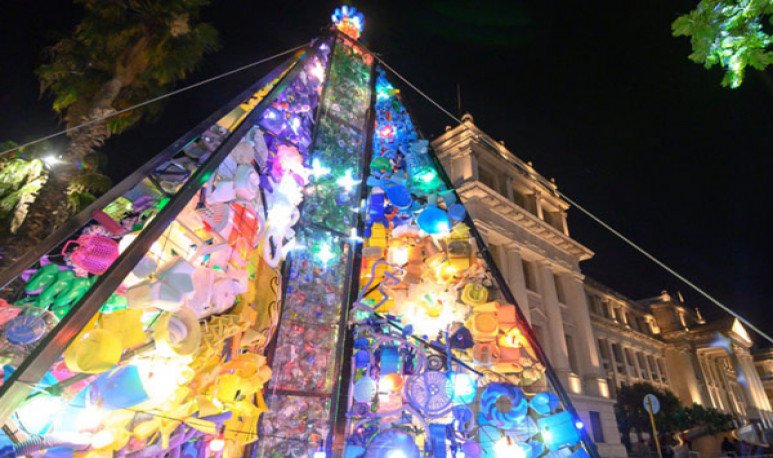 Historically, the Christmas tree was prepared on the iconic Plaza España,  where the structures that made up the monument became giant wrapped gifts  . However,  with a reorganization  of the city, this tradition was put aside and an  imposing tree was put together in another of the key structures of the city.  This is  the tree of the Bicentennial Lighthouse.  A monument located  meters from Sarmiento Park and strategically located in  the Historical Archive of the City.  This intervention continues to take place, as every year.  And it's always a delight  to see  the colorful lighting that gives vivid to the city.

However, due to the  current epidemiological situation   there was no  ceremony or act for the lighting of the Christmas tree located in  the vicinity of Deodoro Roca street corner Carlos Thays . But there is a novelty: this year  the tapes, lights and balloons of the structure will accompany the rhythm of the audio system that has a repertoire of ten Christmas songs.

In total, the tree consists of  44 strips of 100 meters, 300 new white lighting balloons, the star at the tip of the Faro and two looks for 14-ray skies also at the top of the structure.  Also, the  Sarmiento Park will have a bright atmosphere  accompanying the Christmas tree facilities. Illuminated retro gifts, floating RGB balloons at the fountain, and figurines of reindeer and sleds were placed in the vicinity of the tree.  But another intervention was also created in the city...

This Christmas everything is different, and we Cordoba know how to adapt. Another tree surprised us with a new design, and located in the center district, a few meters from the Plaza de la Intendencia. The receipt of such a Christmas intervention was done through an act headed by the mayor Martín Llaryora. The brand new ornamentation, allusive at the end of the year, is located on  the corner of Caseros and Bolivar.  Sector that became pedestrian this same year, when the  “supermanzana” was inaugurated.

On the same day of Our Lady, a few hours after the beginning of December 8, Mayor Martín Llaryora led the “opening”  and lighting of the Christmas tree  that the city of Cordoba offers in the center for this end of the year. In response to that date, followed by religious issues, and foreseeing the tradition that  these types of ornaments  have by the end of the year,  Llaryora disseminated the initiative.

“ We lit our sustainable Christmas tree, made with recycled plastic materials that our city's neighbors separated  in their homes,”  he said. In this context, he stressed that  “the superblock of the Plaza de la Intendencia  was filled with colors”,   alluding  to the lights and recyclable plastic elements  that were used for its manufacture.  “ I want to thank  the Cordobeses for the effort they make in the household separation of waste and to those who intervened in this action that makes this effort visible”,  added the mayor on the spot.

It should be noted that whoever circulates around the place, in addition to the lighting  placed, will encounter this tree and “buckets” made with compacted aluminum cans.  The latter elements, found  in the Caseros stables overlooking the Courts Palace and Palacio 6 de Julio, simulate the  gift boxes on the sides of the tree   that complement the landscape.

About this new Eco tree, we do not know  if it will continue to accompany us  for years to come, but we do know some features of its structure. As for example, it has 8 meters high with 6 fins of 3.5 meters , while the materials were purchased from the differentiated collection and thanks to the work of the Centro Verde Norte.