Every small action around the carnival has its explanation and history. In this note we tell you the secrets of the humahuaqueño carnival. 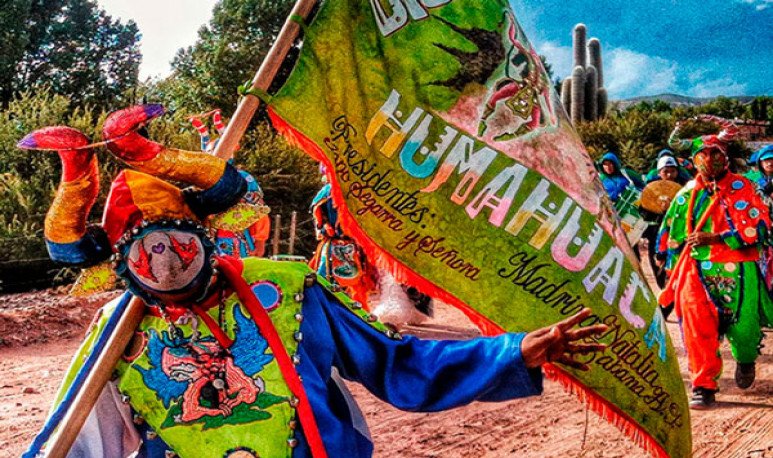 Every year ,  40 days before Holy Week,  the villages of Quebrada de Humahuaca in Jujuy begin to live a  festive season of revelations and fun.   This is the celebration of the Carnival that combines traditions of the Spaniards of the conquest of America, and the cults of the native peoples of the region.  This celebration takes place more than 500 years ago and its central axis is to venerate the earth , honoring the Pachamama. However, despite having this very important thread,  there are also other  small rites that work around different issues and beliefs. In this note we tell you 4 rites and symbolies of the humahuaceno carnival.

1. Dig up from the carnival

The Carnival of the Quebrada de Humahuaca begins  on the Saturday before the Carnival weekend.  This starts when groups of comparsas  arrive at the foot of the hills  surrounding the villages to  unearth the “devil”, who was buried at the end of last carnival. Each comparsa has its own devil, the one who was buried and the living “big devil”, who is  engaged in officiating the rites.

The buried devil is a small doll (Pucllay) that symbolizes the sun.  According to the beliefs, this character is in charge of fertile the Pachamama or mother earth. The Pucllay is taken from under the apacheta or miljón (pile of stones) and  that is when the revelation begins.  The true meaning of carnival  is liberation and atonement for sins.  That's why the pucllay  owns the entire population . This Pucllay is raised by the big devil, as a  symbol of unburial to give an official start to the rampant of the carnival.   Sometimes he is the president of the comparsa, or the godfather of the devil is the one who takes the doll out of the miljón picks it up and shows all his followers.

In this rite, repressed desires are released and that is why,  during the celebration , it is allowed to drink, dance and do whatever everyone feels.   Moral precepts are set aside for  eight full days.

Once the devil is unearthed,  the celebration begins.   The start comes with  noisy fireworks and the descent of each comparsa,  which are always many. Each one is composed of many  disguised participants and their official devils , they also have a proper name that distinguishes them and their unique symbolisms. They usually have a blockhouse that is the meeting point of their followers. The path that the comparsas undertake  has as the beginning and end each shed,  and each one is marking  its own route.  Meanwhile, the journey is musicalized with  indigenous instruments such as erkenchos, anatas, charangos and bass drums.   The comparsas carry banners that identify them, flags, shields and parade. After parade through the streets of the villages, the comparsas     meet  at their strategic points, where they create rock with music and dance until dawn.

3. The devils and the joyful

The inhabitants who receive the comparsas dress in  colorful costumes using jingle bells and masks, and  are recognized as the cheerful ones. Devils, on the other hand,  are also disguised people  who  are completely possessed by the joy of carnival.   Once a person assumes the role of devil, he can not set him aside for the full 8 days, as otherwise,  a curse may fall on him.   Also, devils can't say no if someone offers them something to drink or invites them to dance, because they  should be kept sails celebrating.

4. Burial of the carnival

Finally, on Carnival Sunday, after several days of celebration,  the celebration ends with the new burial of the devil  in the also called  “Sunday of Temptation”.  They all return to the foot of the hills and bury the doll in  a hole that represents the mouth of the Pachamama.  In that small well  offerings of all kinds (coca leaves, various alcohols or cigarettes) are thrown and fireworks are re-lit to close the Carnival. At this time,  the pacha is appreciated and asked  to  be all right until the next carnival.