The country united in the same song

Sing Argentina, the event organized by Red Solidaria, was replicated in 380 points of the country that simultaneously sang the same song. 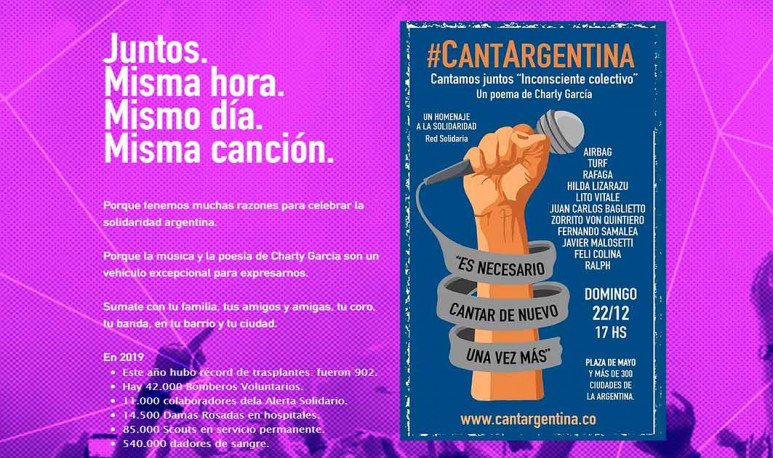 What would happen if the whole country joined their voices? Something like that,   Juan Carr , from Red Solidaria, will have asked  himself before organizing the meeting   Sings Argentina   . Simultaneously, in 380 points of the country, the same song was sung to celebrate solidarity.

With the hashtag  #CantArgentina,  the proposal began as something small and multiplied throughout the territory, with shows in parallel. The event began at 17 on Sunday 22 December and closed with an exciting act: at 20, everyone sang at the same time the song “ Unconscious collective ”, by Charly García.

In   Plaza de Mayo  , the crowd gathered were lucky enough to hear the stanzas recited by  Graciela Borges.  Then, many great Argentine musicians sang the song, along with the crowd gathered there, who could read the lyrics of the song on a giant screen.   León Gieco , Lito Vitale, Hilda Lizarazu, Juan Carlos Baglietto and Javier Malosetti,  among others, gave their voice to solidarity  .

From Red Solidaria, the invitation to join was open to everyone who wanted to sing. It was only necessary to communicate to know the technical details of the transmission. The initiative expanded rapidly throughout the country.

Sing Argentina  sounded all over the territory. From the big cities to the smallest villages. Cordoba, La Plata, Tucuman, Mar del Plata, Salta, Santa Fe, Corrientes, Alvarez (Santa Fe), Rauch (Buenos Aires), Mocoretá (Corrientes), El Piquete (Jujuy) and Chalten (Santa Cruz), among many others. In total, the event took place in  380 points of the country.  In Buenos Aires, Rosario, Córdoba and Posadas, stages were set up where different bands and singers were animating the afternoon until the moment when  the whole country was a single voice.

Yesterday I dreamed of the hungry, the crazy,

the ones who left, those who are in prison

today I woke up singing this song

that was written some time ago.

It is necessary to sing again,

A unique and special hotel

The Firefly: light for all