Racing Solidario, whose manager is Miguel Guidardini, has the Football for Social Change program in which professional footballers have their participation. 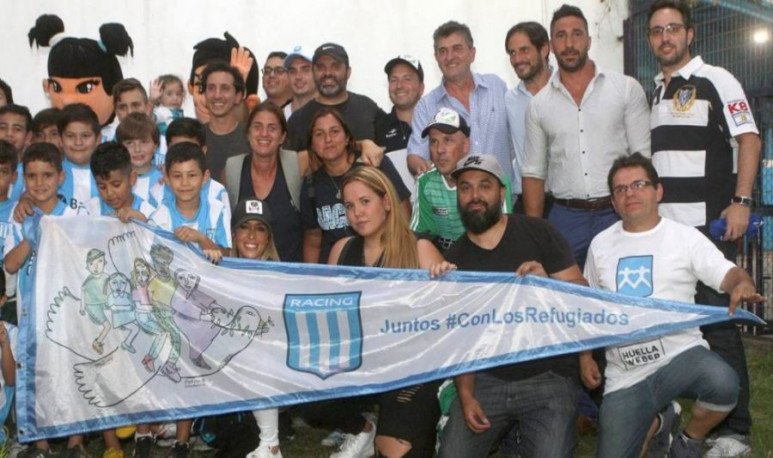 Racing Club has been a few years with a new philosophy embodied in the slogan “Solidarity Racing”. Today he is the leader of the Argentine Football Superliga and also stands out in the field of solidarity actions.  Racing  Solidario, whose manager is Miguel Guidardini, has the Football for Social Change program in which professional footballers have their participation in solidarity actions.
Guidardini stands out several protagonists of the Academy among the most collaborators: Iván Pillud, Lisandro López, Lucas Orban, Javier García, Renzo Saravia, Alexis Soto and manager Diego Milito, although, on request, points out a case, that of Lautaro Martínez, current player of Inter.
“ In 2018, for the  Reyes celebrations, the team had just arrived on vacation and everyone had to study and start the preseason, but he came up and me said he wanted to be in the gift delivery, because in 2017 he had been very impacted. And not only did we go to a hospital, he asked to go to two... we went to Fiorito and President Perón. There was a room missing, and he was going. I found a baby in the hallways and asked me a toy to give him. That's Lautaro. I remember that again, injured, he didn't want to miss it either: it was with plaster and crutches,” said Miguel.
Guidardini stressed that “it is not always easy, because football often handles the moods of everyone in  clubs , but luckily in Racing it is understood that it is a civil association without ends profit that is much more than football, that there are other sports and more goals, such as helping others.”
“ We support social programs, solidarity campaigns and education in values, and in raising awareness of a better quality of life, seeking a more inclusive, peaceful, just and tolerant society,” he said. In addition, he referred to the important support of Weber Saint Gobain, through its Huella Weber program, to realize Racing Solidario's projects.
“ His presence helped us grow a lot, even with the creation of the School of Craft, with training in masonry. For six years we traveled this teamwork journey together and we want to go for more,” he said. The next step will be to relaunch Sustainable Racing, another program of the albiceleste entity.
“ Our great goal is to improve relations and communication, reducing conflict and violence situations, teaching how to travel in peace and to resolve them in a constructive and peaceful way. In this way we observe that cases of addiction, violence and crime are lowered,” said Guidardini.
Juan Ramón Fleita, a Racing figure in the 90s, is another one who contributes to the cause. “From Santa Fe I came to a village on Maciel Island and then lived in a conventillo in  La Boca . The first time I ate well was when I concentrated with Racing, when I was 18... I worked as a boy and had a bad time. But one day I saw Maradona leaving Boca's training, stopped her car and I could tell her my dream. He told me to fight, everything could be done.
“ I was so motivated that I ran home and told my father that I wanted to try myself in Racing. I had two jobs and I was about to quit, but I fought her and got to Primera... Years later, when I was in Hurricane, they detected a tumor in my ganglia and also fought until I beat it. I like to collaborate with Racing Solidario and enjoy transmitting the message so that other guys know it is possible,” said “Lagarto”.