The Jean Maggi Foundation is born from the tragic individual history of its creator and today becomes a symbol of collective work. 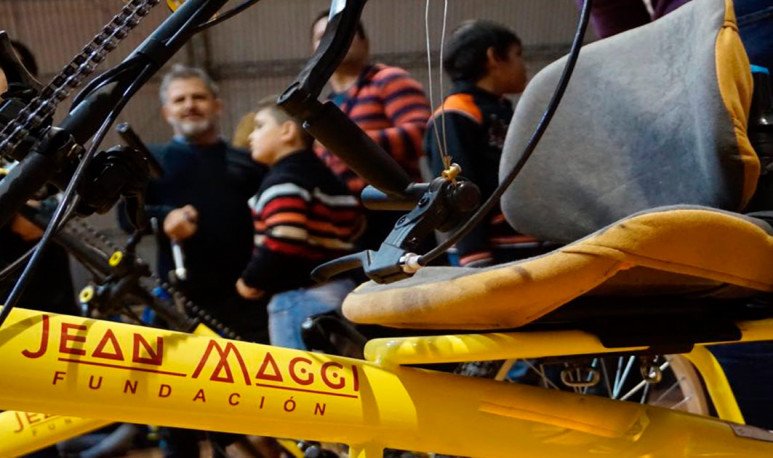 The tragic story of Jean Maggi today became a symbol of collective, inclusive and visibility work. With his fight against polio and his performance as a high-performance athlete, Cordovan decided to contribute with his bit. What began as a small contribution to the community of people with disabilities and functional diversity, became immense collective work.  The    Jean Maggi Foundation  is  a non-profit organization that seeks to support a community  that is rarely included in the sports agendas and social.  That is why, from this NGO there are erramientas and spaces  for children with disabilities to connect with their sports I. And thus, grow in different aspects: social, relating to other people; sports, training daily; and personal, since  constant improvement  is an important axis in sports practices.

Juan Ignacio Maggi  is almost 60 years old and throughout his life he saw himself facing  different obstacles.  At only one year old, he fought polio and beat him. He then suffered two heart attacks and, with the adrenaline of  having faced death, he joined forces to build this  social aid space.  The story of life of this man is revealing, as it shows us how courage and adverse conditions can become great allies  when it comes to    realize dreams .  Maggi, after the different episodes he had to face, became  a high-performance athlete.  With his high capacity as an athlete he competed in New York, Rome and Madrid. He also  represented Argentina in the Paralympic Games.  He crossed the Andes Mountains on horseback and reached the summit of the Himalayas. Those were his adventures, which led him to take the momentum and found the organization,  along with Maria Victoria Milano.

The story of an endless project

The Jean Maggi Foundation was born in 2016  and, over the years, was transforming the lives of thousands of children  who were encouraged to bet on their sports side. Many famous personalities and Paralympic athletes were added to contribute new tools to the Foundation from their places. Among them, Mario Pereyra, Rebeca Bortoletto, Pancho Ibañez, Carlos Marco and Miguel Clariá. Also Gustavo Zerbino Stajano, who survived the Los Andes accident in 1972.  Mariana Pérez , who belongs to the  Argentine Women's Adapted Basketball Team,  and Luciano Macagno, who serves as Managing Director of Delta Air Lines de Latinoamérich and the Caribbean. And thousands of people more than, with their small or great contribution, add to this  social and cultural transformation.  In Maggi's words: “What I want since the foundation is to change the wrong concepts that were generated around disability.” The Cordovan athlete says that “there should not be the word disability  or the word inclusion ”. Therefore, the foundation's work is  much deeper than intervention  in individual experiences, it also points to  cultural change.

The Maggi Foundation receives  collaborations from ordinary citizens and, with the funds raised, manages to distribute  thousands of hand bicycles  for children with disabilities. This tool is consolidated as an  indispensable means for the sports development  of this part of the population. That is why the Foundation's work is admirable. In addition, from the group that works on these goals, they have a common dream: that the concept of the Maggi Foundation  will expand around the world . And transform lives internationally. With the documentary that tells the story Juan Ignacio Maggi, directed by Campanella, this idea is getting closer and closer. Since audiovisual production can be enjoyed from the  international audiovisual platform Netflix.  Reaching  every corner of the planet and giving a motivational message to those who are in a  situation of motor disability.

We're going to change the world,  we're going  to the Maggi Foundation.