Home Argentine Solidarity fingerprint A pint for a toy

A pint, a toy and good vibes on the coast santafesina, is the proposal of some brewers for this Sunday.

One of the characteristics that we Santafesinos exhibit most proudly is our solidarity. That one that knew how to go afloat in our most difficult times and that continues to emerge before the trials that life puts us ahead. Another birthmark we have in Santa Fe is the passion for beer. Much has already been written about our invention of plain,  the current boom of artisanal bears  and the unique quality of our water to cook this magical brew.

Solidarity and beer, then, are two Santa Fe banners. And what happens if we put them together? Something very interesting may come up, and that is  the proposal for this Sunday, December 20 at 17.  The quote is, as it could not be otherwise, in another symbol of Santa Fe:  the Lighthouse de la Costanera.

The call is called “A pint for a toy” and was driven from an  Instagram account called “Beer artisanal solidaria”.  Its promoters are six artisans brewers in the city who had only one goal: end with a smile a year of m... 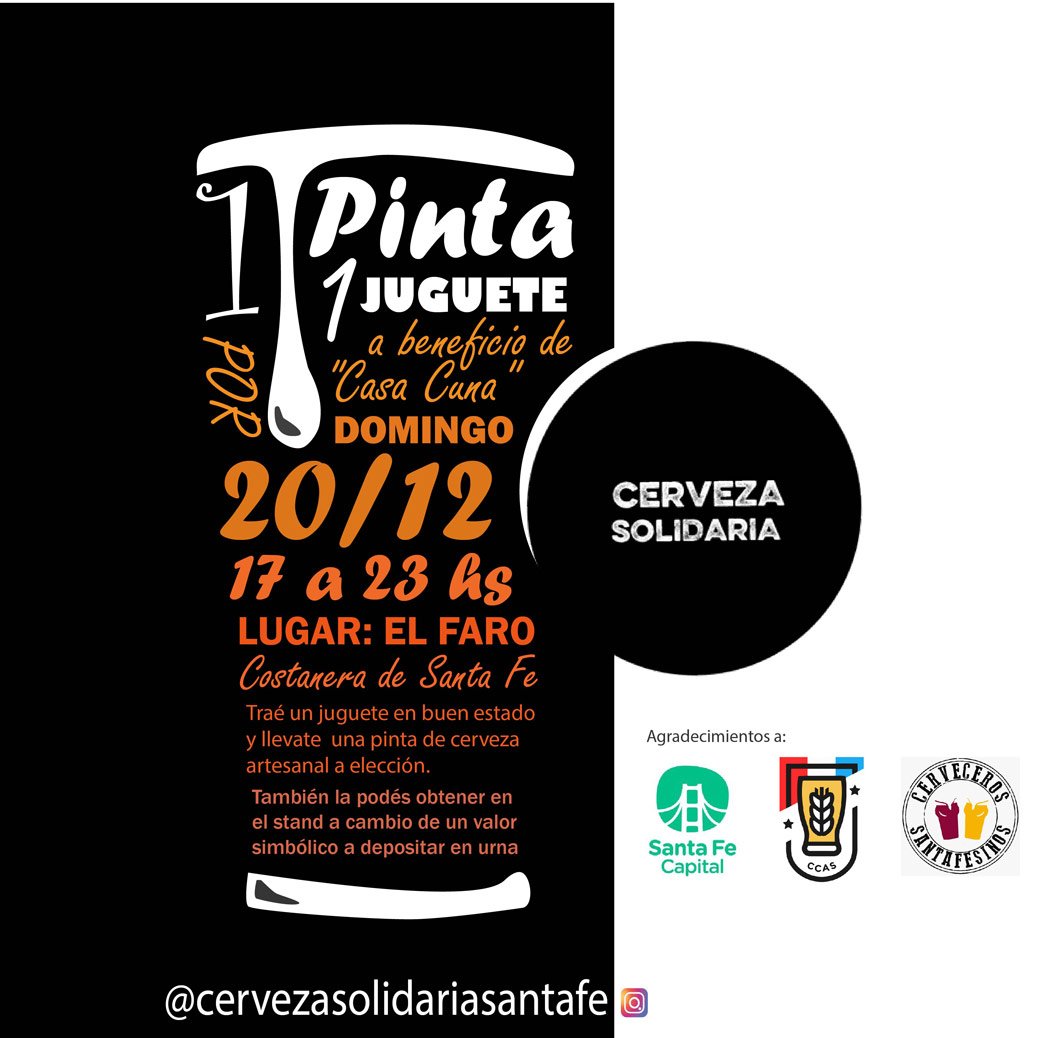 That smile can now be that of many children in Santa Fe, for whom access to toys, at these holidays, may not be so easy. Ser Argentino spoke with Sebastián Balestrini, one of the organizers of what is expected as  a beautiful solidarity meeting of Santafesinos for Santafesinos.

“We are a group of friends who met making beer. All home brewers, so we're not dedicated to selling or living on beer. We start by making homemade beer. We crossed in bars, training and travel,” says Seba.They became friends and today they are members of the Santafesinos Brewers Association. “In one of those coffee talks, in the whatsapp group, one came up with  an idea: to do something with this year disastrous for everyone . We didn't know what well, but do something. Let's see if we could at least give a joyful closing to a sad year. So we talked to Casa Cuna to see if they were interested in sponsoring them and being able to make a benefit for them.”

For the reader from other latitudes:  the Atanasia Hernando Hogar in Durán Casa Cuna has 80 years of history.Thousands of Santafesino children inhabited and inhabited it.  It was created by Father Alfonso Durán, alarmed by the discovery of babies in a state of abandonment or dead in the 1930s of the last century.The thing about making a benefit for these kids to have toys at Christmas is a huge gesture that deserves to be spread.

Thus, these brewers communicated with the association for formal presentation in the municipality and manage permits. “Since beer has its times, which are different from politics and bureaucracy, among the six that we are we  put together three teams and played it: we started to make a lot of beer .” They made three exclusive cooking for this event. With the capacity that each has not reached them, but some other local brands joined and donated birra.

A simple idea with a huge power

“The concept is a pint for a toy. Bring this together that we like that is the birra for a greater good.  The fact that we got together is a party.  Let it be in a campaign to help Casa Cuna closed everywhere” says Seba with joy.

So these brewers will be on Sunday at the Costanera with two stands: “In one we will serve beer and in the other we will receive toys. Anyone who falls with a toy will take a Boucher for a pint. You can also buy the pint there. And, to make a closure, we will set up an exclusive brewing booth. Showing how  with home equipment you can do. It's a matter of making you want  and minimal knowledge. We will also be with a form to enroll people for a course that we will give about home-made.

Hopefully a lot of toys are collected on this initiative, which is completely selfless.  It emerged from “crazy people who make beer”  and is destined for some little ones to whom we can bring a little joy.