Home Argentine Politics and Economics The Chocobar case opened a debate on the boundaries of the security forces that still remains unabated.

The case of police Luis Chocobar led to a strong discussion about the limits of the actions of the security forces and the implementation of a protocol on the use of weapons by the ministry in charge of Patricia Bullrich. 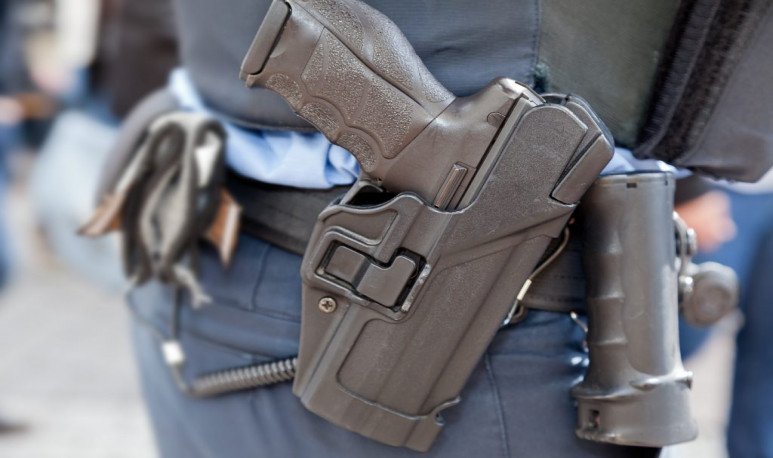 The case of police  Luis Chocobar , who killed a thief who had stabbed a tourist in the Buenos Aires neighborhood of La Boca, led to a strong discussion about the limits of the actions of the security forces and the implementation of a protocol on the use of weapons by the ministry in charge of  Patricia Bullrich .

The event occurred on December 8, 2017, when American photographer Frank Wolek (55) was walking through  La Boca  and shortly before reaching Caminito street in Olavarría and Garibaldi, he was intercepted by two assailants who stole his camera and one of them stabbed him a dozen times in the chest and left him seriously injured.
Both thieves ran out, but while one managed to escape, another, later identified as  Juan Pablo Kukoc  (18), was intercepted three blocks away, in Irala and Suárez, by two passers-by who had seen the attack and held him on the floor.

Shortly thereafter,  Chocobar  (31), an officer from the Local  Police  of Avellaneda, arrived at the site, who identified himself and, according to later, shot the offender because he thought he was going to take out a gun.
Kukoc  died because of the gravity of the wounds, the other assailant, who was a minor, was arrested and the Justice Justice also ordered the arrest of Chocobar, but days later he was released.

In January,  Juvenile Judge Luis Velázque z prosecuted the cash officer for “aggravated homicide for the use of weapons and excessive self-defence” and stamped an embargo of 400,000 pesos on his property.
When this measure was known, the police received the support of President  Mauricio Macri , who even received it at  Casa Rosada , and the Chief of  Staff, Marcos Peña ; the Minister of Security of a Nation,  Patricia Bullrich ; the Buenos Aires Head of Government  Horacio Rodríguez Larreta , and Buenos Aires Security Minister  Cristian Ritondo .

Then came confirmation from the Chamber of Crime, which modified the cover to “aggravated homicide in excess of duty,” while the National Chamber of Criminal Cassation also rejected an appeal as “inadmissible” and the lawyers decided to appeal to the Supreme Court in a complaint.
On 30 October, the highest court unanimously dismissed an appeal lodged by the police defense, so that its prosecution was final and must now face the oral and public trial, after which he could receive a sentence similar to that of a culpable murder.
However, a new survey that was known on November 5 could benefit Chocobar, as it revealed that the bullet that killed the thief first bounced off the asphalt, which would be indicative that he did not shoot to kill.

The new study was prepared by experts from the High Complexity Unit of the Directorate General of Criminalistics of the Argentine Federal Police (PFA) and notes that Kukoc received two hits, one of them, “horizontal”, on the left thigh, which fractured his femur and caused him to fall, and the remaining, the deadly, in the lower back area.
“ With regard to the shot that the victim received in the posterior region of the right flank, and considering the result of the tests carried out, it is reported that it is compatible with that originated by a projectile that has suffered a trajectory deviation by rebound,” the report stated.

The key to establishing that the bullet had suffered a rebound prior to entering  Kukoc  's body was in the analysis of the deformations and marks that the projectile presented.
The survey, which took into account in a picture by frame analysis of the videos of the event, the reconstruction of the event and even the laboratory expertise to Kukoco's clothes, also concluded that “the lack of elements of the residues of the deflagration of powder in the appraised-garments” allowed us to determine that  Chocobar  did not throw at close range but at a distance “exceeding 100 centimeters”.

In the context of the debate in this case, on 3 December the Government launched a new regulation for the use of weapons in federal security forces, allowing police officers to shoot crimes suspects even if they possess replicas of weapons, flee after committing an act or when a high probability is presumed to be able to cause serious harm to persons without being armed.

Bullrich argued that the resolution “will build trust in the defense of society” and changes the old doctrine that policemen “had to wait for the offender to pull first” in order to repel aggression.

However, the decision generated serious questioning of the entire political arc, even within the governing coalition itself, and human rights defenders that warned that this could result in so-called “easy trigger” cases.
Meanwhile, provinces such as  Buenos Aires, Neuquén and Rio Negro  have already stated that they will not adhere to the protocol, as  Bullrich  suggested.
For next year, the amendment of the regulations is expected to be correlated in the reform of the penal code promoted by the Government and which must be approved by Congress.

“Argentines are quite authoritarian”