We share the four national symbols that represent us and their most relevant information. 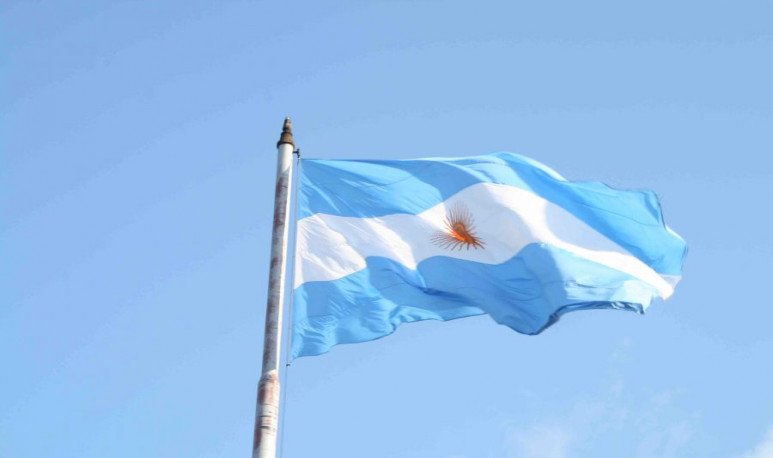 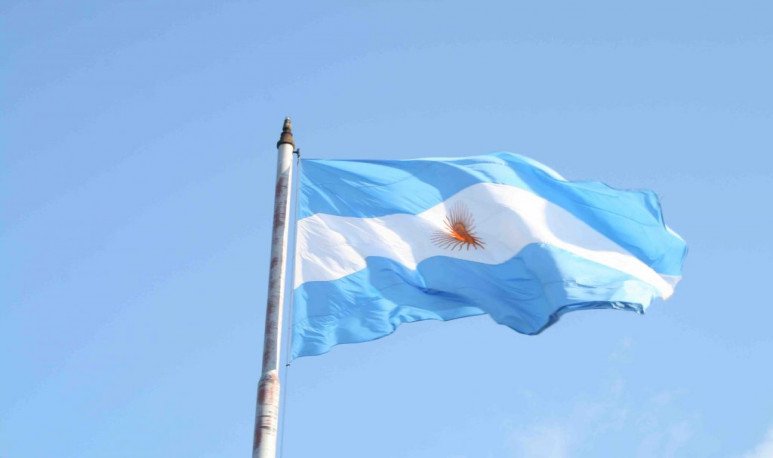 The first country teaches is the  National Flag . Created by General   Manuel Belgrano   on February 27, 1812, it was consecrated with the same colors “blue and white” by the   Congress of Tucumán   on July 20, 1816 and ratified by the same body in  Buenos Aires on February 25, 1818.

In order to glorify it,  Congress  passed, on June 8, 1938, a law that fixed as Day of the Flag - and declared it a holiday - June 20, the anniversary of the death of its creator.

The  Official Flag of the Nation  has its colors distributed in three horizontal belts, two celestial and one white in the middle, in the center of which is reproduced the figurative sun of the eight-escudos gold coin and the eight-real silver coin that is engraved in the first Argentine currency. The color of the sun is yellow of gold. 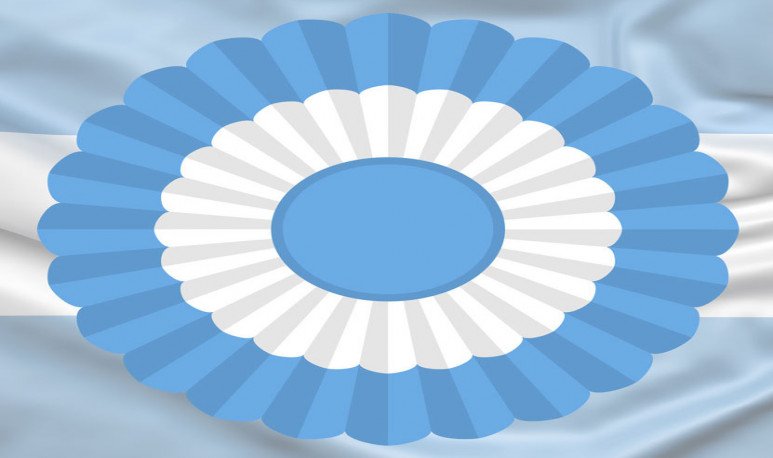 As a result of a spontaneous attitude, in May 1810, the current homeland colors began to be used in  the National Cockade  whose use was recognized on February 18, 1812, at the request of the  Triumvirate .

Feliciano Antonio Chiclana , Manuel de Sarratea ,  Juan José Paso  and  Bernardino Rivadavia    (as secretary) sent to the Chief of the Joint Staff the text in which resolves and recognizes the use of the  National Coarapel of the United Provinces of the Rio de la Plata , declaring by such “the two Colours White and Sky Blue; and abolishing the red with which they formerly distinguished themselves. It is communicated to V. S. for the purposes resulting from this resolution.” 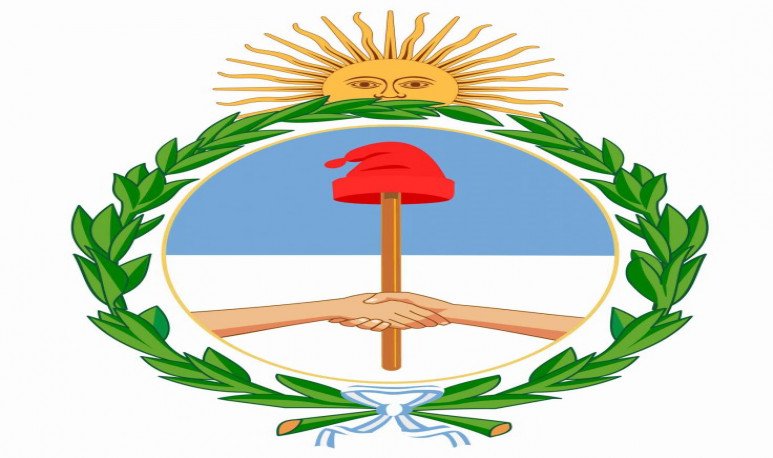 The  Argentine Shield  is the faithful reproduction of the Seal used by the  Sovereign  Constituent General Assembly  of the United Provinces of the Rio de la Plata  , ordered by this same Assembly on March 12, 1813.

Until the  Constituent General Assembly was installed on January 31, 1813, there was no stamp to legislate governmental acts. The real weapons that were stamped in the documents during the viceroyalty were used.

Faced with this need, the Assembly began to use the seal that today constitutes our  National Coat of Arms .

As testimony to this, two letters of citizenship issued by the Assembly on February 22, 1813, are preserved, containing the stamped  shield  : one of them is preserved in the  National Historical Museum  , extended in favor of  Don Antonio Olavaria  , and signed by the president of the body, General  Carlos Maria de Alvear , and the secretary, Don  Hipólito Vieytes . 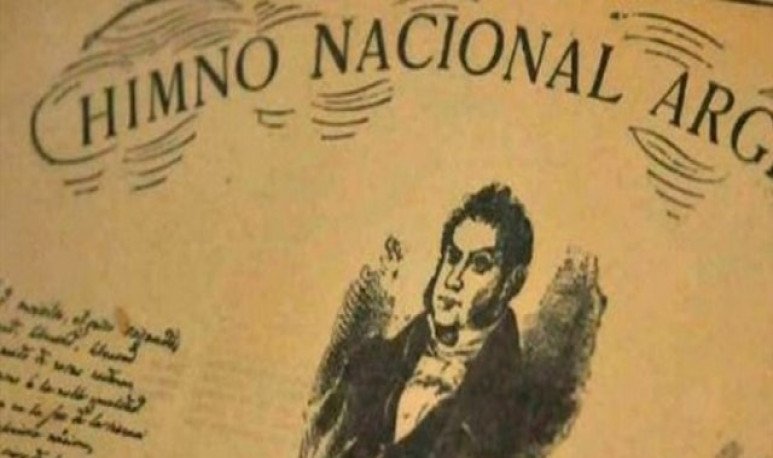 The need to have a patriotic song, which emerged with the  May Revolution  and which the  Triumvirate  knew how to understand, is reflected today in  Anthem Nacional Argentino , with music by  Blas Parera ,  Vicente lyrics Lopez and Planes , and arrangement by Juan P. Esnaola.

The lyrics and music of the  National Anthem  were the subject of patriotic debates. Decree 10.302 of April 24, 1944, puts an end to these disputes about their verses, rhythm and harmony, establishing their patterns.

The official lyrics of the   Argentine Anthem   were established in the decree of 1944, which establishes as lyrics the text of the song composed by deputy  Vicente López  , sanctioned by the  Constituent General Assembly , on 11 May 1813, and communicated a day later by the  Triumvirate to the Governor Mayor of the Province .

The musical version of Argentine maestro  Juan P. Esnaola was also adopted, edited in 1860 as an arrangement of the music of master  Blas Parera . This version was released under the title " Argentine National Anthem - Music of Maestro Blas Parera ”.

Full letter in its two versions

On March 30, 1900  , a decree was passed to ensure that only the first and last quartet and the choir of the song sanctioned by the  General Assembly  of 11 May 1813 was passed on  official or public festivities  , as well as in State colleges or schools.

Be eternal the laurels
we knew how to achieve:
Crowned of glory we live
Or let's play with glory die. Hey, mortals! the sacred cry:
Freedom, freedom, freedom!
Hear the noise of broken chains:
See the noble Equality throne.
A new and glorious nation rises to the face of the earth:
Crowned its temple with laurels
And to its plant surrendered a lion. Choir Of the new champions the faces
Mars itself seems to animate;
The greatness nests in their breasts, On
their march everything makes tremble. The tombs are moved from the Inca
And in its bones revives the ardor,
What he sees renewing his children
De la Patria the ancient splendor. Choir But mountains and walls feel
Rumbling with horrible heat:
The whole country is shocked with cries
of revenge, war and anger. In the fierce tyrants envy
He spat his plague gall
His bloody banner lift
up causing the most cruel lid. Choir Don't you see them about Mexico and Quito
throw yourself with tenacious vicious?
And who cry bathed in blood
Potosí, Cochabamba and La Paz?
Don't you see them about the sad Caracas
mourning and crying and death spread?
Do you not see them devouring what beasts
every town they manage to perform? Choir You dare Argentinians!
The pride of the vile invader,
Your fields are already stepping counting
So many glories to whollar victor. But the braves who united swore
His happy freedom to hold. Those bloodthirsty tigers
Strong breasts will know how to oppose. Choir The brave Argentinian at arms
He runs burning with brave and courage,
The clark of war as thunder
In the fields of the South resonated;
Buenos Aires stands at the forefront
Of the peoples of the Inclite Union,
And with sturdy arms they tear The haughty
Iberian Leon. Choir San José, San Lorenzo, Suipacha, Ambas
Piedras, Salta
and Tucumán, La Colonia and the same walls
of the tyrant in the Oriental Band; They
are eternal signs that say:
“Here the Argentine arm triumphed.”
“ Here the fierce oppressor of the homeland
His proud cervix doubled.” Choir Victory to the Argentine warrior
With his shiny wings he covered,
And haunted in his sight the tyrant
With infamy on the escape was given;
His flags, his weapons surrender
For trophies to Freedom.
And on the wings of glory shall the
throne people rise worthy to their great majesty. Choir From one pole to the other resounds
Of fame the sound clarin.
And from America the name taught,
repeats to them mortals! Hear:
Your most worthy throne has opened
the United Provinces of the South!
And the free people of the world respond:
To the Great Argentinean People, Health!

Already their most dignified throne opened
the United Provinces of the South,
and the free of the world respond
to the great Argentine people health! Choir
Be eternal the laurels
we knew how to achieve:
crowned with glory let us live
or we will play with glory die.