We tell you the story of this artist who is breaking her in the Argentine scene between rock and other melodies. A Cordovan who settled in Buenos Aires to fulfill her dreams. 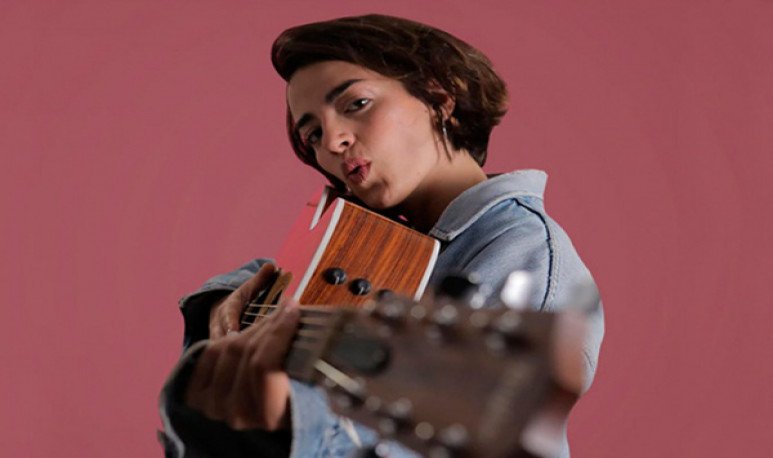 With a few years of age, but a lot of talent, this Cordovan was launched on the national music stage to revolutionize everything.  Singer, writer and instrumentalist, with a unique voice  decided to bet everything on his career.  At the age of twenty-three he moved to  the city of fury to be able to develop in a  more varied artistic field :  Córdoba was a girl.

Before he was encouraged to show his art, he walked through the streets as a street artist. He traveled for eight months in Europe, singing, while going from hostel to hostel.  Among the covers she shared  were some of Amy Winehouse, the Beatles, some tango and every so a song of her own authorship.That's how the trip stood: with what he earned on the street. And, from yapa, she was encouraged to upload singing excerpts to her Instagram account. “ On the street happens one that hugs you, one who ignores you and one who passes by talking on the phone and listens to you. That cured me about shyness and how I felt and how people felt with me as music.”

He returned to his hometown, with the experience as a flag, but it wasn't so fast. He joined the faculty, worked as a wench in a pizzeria and continued to share, little by little, videos on his networks. But the true story of this singer-songwriter begins with the video that started her career. A cover of “It was love” by Fito Paez  that reached 18 million  views  and began the revolution.

So Santi came into his life and decided to bet on more . They founded Screensavers in September 2016  and together they were dedicated to reversing songs. Zoe and Santiago Celli  formed a duo  that musicalizes the days of many Argentines. The bet was a success and every cover was eagerly awaited by the  online audience . Covers from  Los Auténticos Decadentes, Jorge Drexler, Luis Alberto Spinetta, Charly Garcia and Los Abuelos de la Nada  sounded in people's headphones.

So the two decided to bet on an exclusively musical career, of them and no one else, and they settled in Buenos Aires and started  to produce their own songs.  With almost 3 years of career as  a cosmic duo,  they released an  album independently called SMS.  They had  two Gardel Awards nominations,   many  full room recitals  and millions of views  on YouTube, Spotify and other platforms. They said goodbye at the mythical Opera Theatre.

From the capital of the country, Zoe began to share his own songs as a soloist. With the project of publishing a fantastic album and its  co-participations with great artists.  Zoe Gotusso is one of the personalities who position the Cordovan music field in its sights.  Together with Juan Ingaramo and others, they make the city of fernet and birra present in all galas.

“ It didn't change that much. I'm here  and I love Cordoba,  but I love it here. This city has given me things, like having artists around. In Cordoba you crossed an artist per block, here you cross four,”  he tells  the media.In Buenos Aires, Gotusso  receives advice from Marilina Bertoldi,  elbows with  Louta,  working together.He's  roomate  to  Eric Davies, creator of the new generation festival,  and he passes it from stage to stage.

The Harvest of a Journey

Zoe decided to present his first songs independently, marking his way as a soloist . The songs he shared in that condition were: “Una Bossa +”, which  exceeds 6 million listeners on Spotify,  then “Monoambiente en Capital” with  more than 4 million views,  and “Calefón” .  In the  middle of the year , he released the documentary  Portrait en Movimiento,  in which he tells the behind the scenes during the composition and recording of what would be his next album.