After many seasons working for the Argentine subsidiary of Universal Music, the successful youth singer broke ties with that company and became the new figure of Sony Music, week in which she published a new single with María Becerra. 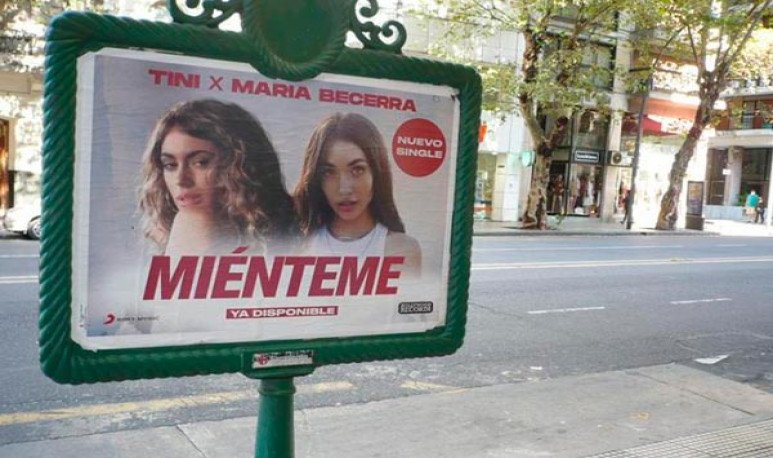 While in Boca Juniors they suffer nightmares to see that the arrival of Uruguayan Edinson Cavani will be impossible or in  River Plate  pilgrim so that Rafael Santos Borré never leaves the institution” millionaire” to play in Brazil, the big “pass of the year” occurred at the end of last week when it finally became aware that young singer Martina “Tini” Stoessel, finally left the record label Universal Music to sign a contract with the Argentine subsidiary of Sony Music, the company with it released last Friday its new song “Miénteme” accompanied by vocalist María Becerra.

Some novelties in the last five years in the city of Buenos Aires are communicated in a fairly special way, probably appealing to the old mechanics of films that use public roads to anticipate the premiere of a film or the companies that promote the new non-alcoholic beer, posters that cover almost 85 per cent of the city thus causing a very special effect on communication. The proven structure of the “visual shock” has recovered followers and some companies reuse it thinking the audience coming and going through the arteries looking at static advertisements located in different locations.

The protracted negotiations that kept the secret necessary to exploit with the novelty only at the right time, developed intensively, several months in which the singer finally accepted the offer of the well-known multinational. It is important to remember that in August 2015 “Tini” signed during his stay in Europe with “Hollywood Records”, a global structure that later agreed regionally with Universal Music for each sector. In 2016, after having released several albums with his character “Violetta” for “Disney,” he released his great solo debut. 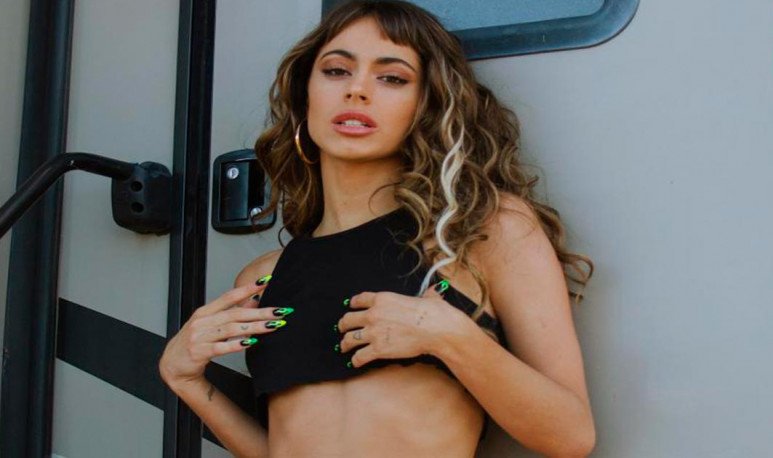 Naturally in these rough times of recess and extremely harsh operational serenity with the pandemic leaving wounded everywhere, they did not transcend the numbers about the “pass” the singer from one multinational to another at the local level, but obviously “off the record” it is estimated that the agreement will become and aacute; in juicy earnings for the singer and actress, one of the most popular figures of the child and adolescent scene in the last decade worldwide. Focused fully with her artistic change and consubstantial with giving new brakes to her career, the singer released a single with vocalist María Becerra.

While Martina “Tini” Stoessel is an artistic personality who has dabbed several musical issues, the arrival at the record company located in the Palermo area is not casual. The huge industrial factory of Calle Cabrera al 6000 accumulates many scrolls in the new Latin currents, especially with regatón, urban profile styles and also concomitant genres, something that this young woman must have taken into account  artist , pioneer in looking for ways to increase its global reach, especially when a Sony figure like Niki Nicole sang these days on American tv.

The recent arrival of the daughter of the well-known television producer to a label that achieved a prominent world space with the new Latino currents, definitely does not generate surprises, because the successful career of “Tini” had passed in this decade the traditional pop context, very close to the child profile - teenager. The truth is that the artist celebrated last March the 24th birthday, a stage in which her music profile seeks to add other audiences and profiles, elements that must have substantially affected the time to change the record company and face a drastic artistic change. 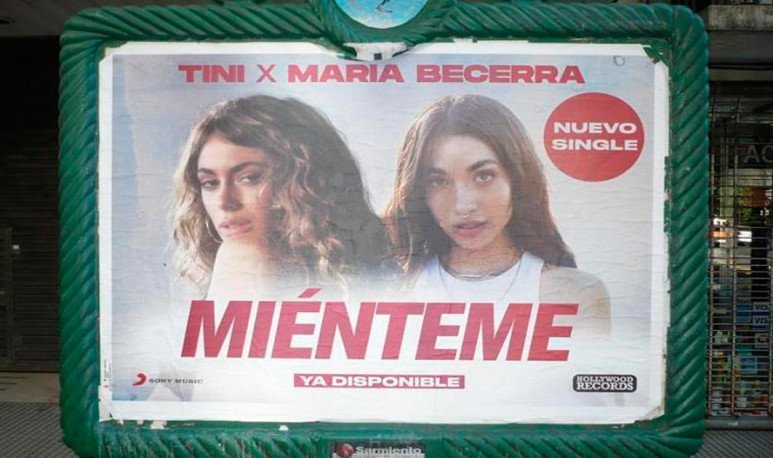 A statement released in recent days by Sony Music shows the entry of this beautiful young Argentine vocalist in her ranks: “Emerging as the most popular Argentine female figure on Spotify, Tini shares her single “Liénteme” with María Becerra, a special moment for the singer. The artist comes after her resounding success, which includes earning the hearts of more than 34 million followers on the networks, surpassing four billion audio and video reproductions, collaborating with artists such as Karol G and Alejandro Sanz.”

“From the author of TINI, María Becerra, award-winning producers Andrés Torres and Mauricio Rengifo, like Elena Rose and Enzo Ezequiel Sauthier, “Lie to me” delights us with its dance rhythm and its suggestive and fun lyrics about discreet kisses between friends: “Give it, lie to me, do what that you want me, tell me that tonight I am your baby, and tomorrow we're friends.” Empowerment is on the skin in the music video directed by Diego Peskins, released in recent hours,” says the label's statement about the arrival of the singer to the strongest multinational on the market.

The video of the song “Liénteme” flirts with a lot of situations. At the beginning of the clip, Tini and María Becerra find themselves in a fast convertible, heading towards a petrol shop that has a restaurant. Among many laughs and jokes, they manage to seduce and enchant a group of boys with their fascinating choreography, but in the background the story plays with other themes, evoking the film “Thelma and Louise” for a certain attitude of illegality when stealing a motorcycle and money, without forgetting that there are also marked attitudes of the adjacent duo in lesbianism, casual sex and other patterns of behavior. 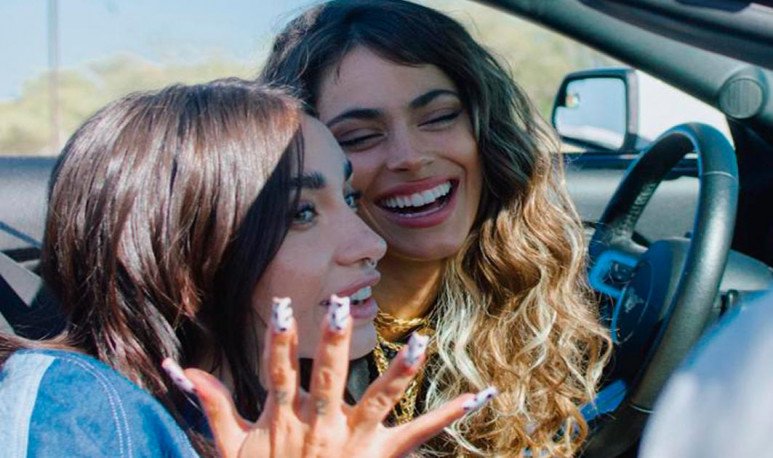 As Sony Music reported in a press message, “Tini's career continues to accelerate with the release of “Lie to Me”, soon she will release more unreleased material that will captivate the whole world this year and the following years.” This statement naturally does not leave ends untied, because the company's idea is to cement the arrival of the youth star with a large drummer of singles before publishing a complete album, posture used by the stamps of a time to this part having changed the profile of consumers, who listen to these songs on their cell phones, breaking very old and familiar dynamics.

Tini, before breaking with the Universal Music label, had released by this company the album called “TINI TINI TINI”, a recording published in different formats during the past year in the midst of the pandemic. The singer co-wrote all the songs on this record with the support of renowned producers Andrés Torres and Mauricio Rengifo, winners of the “Producer of the Year” award at the Latin Grammy 2020. The latest songs edited by the artist had already shown a severe inclination of the pop star for new Latin trends and urban genres.

At that time, while it was unknown that the singer would move her work to Sony Music label, the vocalist had provided details of her creative approaches. On the subject, I had argued that “my intention is to convey a message of freedom without prejudice or stereotypes, I used different musical genres and various aesthetics, I felt the freedom to express what I wanted in each song, was to try, make a mistake, change, accept me, was fundamental to grow as a person and artist. Never allow another's critical gaze to paralyze you, make believe, believe in you, because everything came with a purpose.”

The artist's career was obviously forged with her incorporation to the factory “Disney”, a place where she developed her growth as a singer and actress with a historic role that led her to sing in different cities in Europe, on a brilliant tour coordinated by the prestigious entrepreneur Argentinian Daniel Grinbank. Her first television participation was in 2007 with a minor role in the Argentine telenovela “ Patito Feo ” and hence the career of the young vocalist grew tremendously, sharing in recent years a range of Very popular songs, accompanied by great figures from the pop world.

The actress and singer won a  Martín Fierro Award as a revelation actress as an artistic journey that found her at the end of her great work with the Universal Music label publishing “Un Beso en Madrid” with Spaniard Alejandro Sanz, a stage in which he made recordings with performers such as Khea, Mau and Ricky, Greeicy, Lalo Ebratt and Sebastián Yatra, with whom he lived a media romance that culminated surprisingly when this figure decided to break the relationship by claiming absence of contact by the agendas of these figures in the world orbit of the Spanish-speaking context.

The press that always seeks the media side and banandulero have plenty of reason to announce this record move: Martina “Tini” Stoessel joined the famous record label Sony Music, coincidentally the company in which two very special figures from the pop world play as  Lali Espósito  and J-Mena (Barón), artists with whom I was supposed to be able to publish new songs having them as special guests, an idea that sounds nice, but that The fans of each artist may not take in a sympathetic way. We will have to see how the next moves of this beautiful vocalist born in Buenos Aires on March 21, 1997, a very professional artist who reached a prominent place in the industry and who is now news for her record move.