Alicia Ferrari and Nelly Calle are part of this particular musical duo. 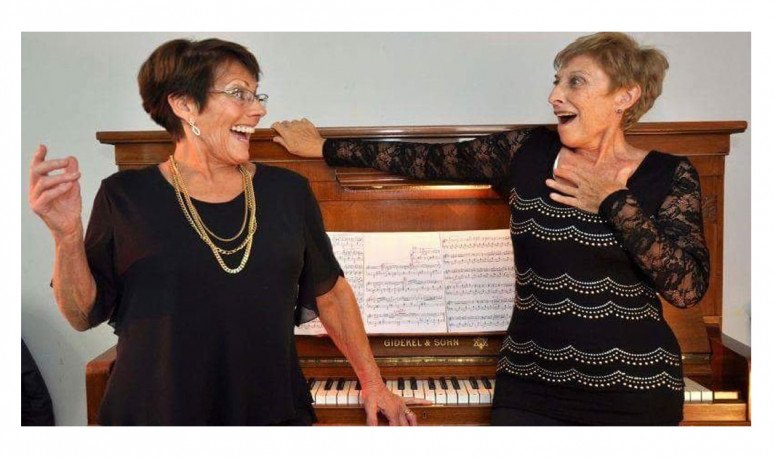 The musical culture of the south collects currents of all kinds . From   rock ,  chacareras ,  cumbia  and instrumental . Few projects articulate what do “ Dos Pícaras Pianistas ”, the  trelewense   group composed of the outstanding Alicia Ferrari and Nelly Calle : piano, laughter and classics.

The renowned   Chubutenses   have a long history in the cultural sector: Alicia is known for the composition of choral works, many sung by the groups of the Valle and participants mostly from the various   Eisteddfod   of the province (Mimosa, de la Juventud, del Chubut, Esquel); he has also founded various choirs such as Youth from the Municipality of Quilmes  ( Buenos Aires)   by Children from the Teatro Municipal Roma ( Avellaneda , Gran Buenos Aires), and the University of  La Pampa . Nelly has been part of numerous groups where tango and milonga are an indissociable part of his repertoire, as well as sharing stage with great artists, such as the prestigious pianist  Ricardo Polacco or Julio Ñañez  en bandoneón, showing versatility and musical hybridization.

Two rogue pianists is not only the name of this duo but that is what the show is called.  At the beginning of the project it was called “Humor from the piano” , a phrase that continues to be impregnated every minute of women's performance. They have been presented in various spaces and locations in the  Chubut :   Gaiman ,  Trelew ,  Puerto Madryn ,  Esquel ,  Dolavon  ,  Comodoro Rivadavia  , to say just a few cities. Also in San Antonio Oeste, in  Rio Negro  and Buenos Aires, specifically in the Casa del Chubut, the government agency of the province in the Federal Capital that is located meters from the Obelisco Porteño, in Sarmiento 1172.

His original show combines various branches of music: his high artistic level in his two piano exhibit and perform tango, rock, popular songs, fragments of Mozart's works, Spanish songs, and cariocas. But if that wasn't enough, they articulate it with humorous scenes so that the audience feels present and part of the show. The challenge of artists is that every person present enjoys music with smile and fun, bringing a different show, out of the norm.

Although both have a great journey, among them they distinguish and complement each other harmoniously: Nelly has a more edge from tango and classical works in its repertoire, with accompaniment of other pianists and performers who have joined their shows.

In their show with Julio Ñañez, they included an ensemble of strings, violins, cellos, double bass and also dancers: in one of their last show they have been invited on violins Susana Quilaqueo and Ana Pomar; in chello Silvina Selzer; in double bass René del Pueche, and the dance couple composed of Tatiana Cherey and Antonio Carrasco to complement and add to the repertoire.

For her part, Alicia has a wide tour in the choral world: with compositions and arrangements that many of the choirs of the Higher Institute of Teaching and Artistic Training No. 805 and its various Annexes have sung in different competitions and acts. Her husband has also been a great companion on his musical tour: Master Clydwyn Ap Aeron Jones was and is recognized locally, nationally and internationally.

Artists and their duo continue to open up in this cultural world that has been so varied in recent times: between laughter and fun,  Alicia Ferrari and Nelly Calle are in charge of articulating classical and current works with humor ; they can be found on the various social networks to learn about their upcoming performances or listen to the luxury of their songs on  Youtube . Rogues and pianists.

“I'm a poor unhappy who plays piano like the gods,” said Suizer, the “street pianist”