Mendoza's training is the first, in the whole country, to give concerts to the public after the pandemic. The philharmonic orchestra is a classic. 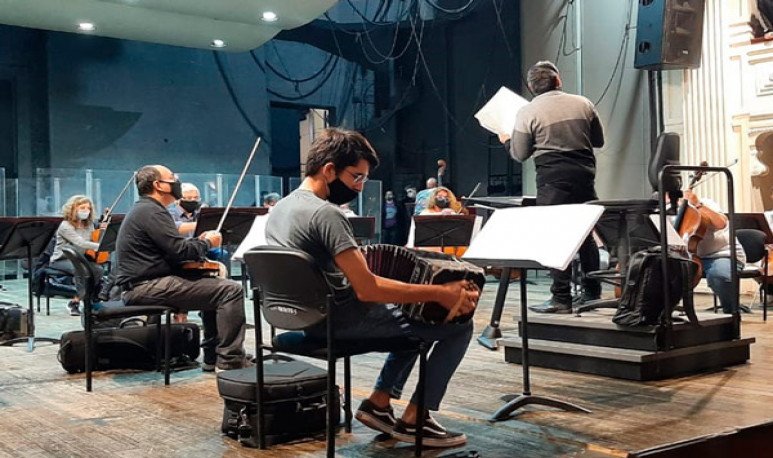 Like all musicians, bands and rhythmic formations,  the Mendoza Philharmonic Orchestra had to spend several long months under the stage.   Each musician continued to rehearse from home and the situation became increasingly unbearable. However, one day, the sun rose again.  The musical training already had a first reunion with the audience in the main hall of Mendoza, the   Teatro Independencia.   However, it will continue with two other functions in the coming days.

The shows have to do with the  100 years of the birth of   Astor Piazzola , which is why the cycle has been called Piazzolla Eterno. The function of baptism and reunion with people was on Friday, February 19, while  the new dates will be February 26 and March 11.   Tickets are available in “entradaweb” and have a value of 200 pesos.

The Conductor of the Orchestra highlighted and valued the permission he was conceived so that his training can return to the rehearsals.  It is that it is a large number of musicians who must inevitably remain very close while playing . Even so, they were allowed to make their music again, complying with strict protocol. This is the first of the orchestras that exist in our country, to get back on stage. In fact, many other training groups have asked about what kind of protocol and how they are working to have returned to the activity.

The idea is to pay tribute to this composer who, more than Argentine, is universal, is from all over the world.  This is what they understand from the orchestra, which has prepared a program that goes from less to more, the first was a chamber recital, in which the history of  tango was presented  , a work that it must have been adapted to many formats, and it was for piano and clarinet. Then Bruno Cavallaro, a great talent in Mendoza tango, performed, along with a string orchestra, well-known Astor Piazzolla songs.

February 26 will be the second date of this tribute cycle and is a selection of the most well-known songs of the composer, with the largest orchestra and guest singers from Mendoza.  The last of the dates will be March 11 , when, 100 years ago, Astor Piazzolla arrived in the world . And finally, it will be a big show that includes the Aconcagua concert, which features bandoneon, and orchestra of strings and timbales. A series of tangos will be made, written specifically for large symphony orchestra format, as well as other “surpresitas”, according to the Director about this show in which Mendoza bandoneonist Fabricio Colombo will also participate.

Piazzolla aroused admiration for the bandoneon of many musicians.  He interpreted it so masterfully, that many people were inclined to learn how to play this instrument.   Such is the case of the bandoneonist Colombo, who, as we said, will be on the tables of Independence. Who was also very proud to be part of the first orchestra in the whole country, to return to the stage.

Acoustics of the Independence

This room is the most important room in Mendoza. It would be something like the “ Teatro Colón ” from Mendoza. Even, it is also its acoustics that stands out above the rest of the theatres and stages in Mendoza and the interior of the country.