Los Palmeras returned to do a historic show. In Mar del Plata, they shared the stage with the Teatro Colón youth orchestra. 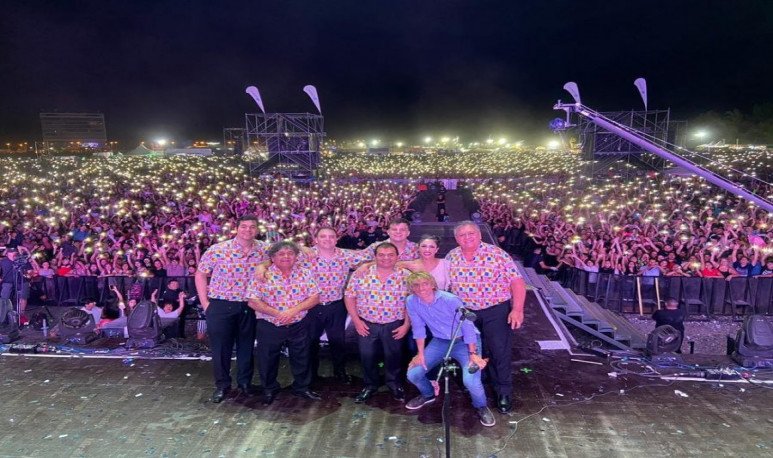 The phenomenon of Los Palmeras does not decline in its popularity. After the furor of “ Soy Sabalero ”, this time they made a historic show in Mar del Plata: their popular cumbia was sweetly accompanied by the Academic Orchestra of the Instituto Superior de Arte del del Plata  Teatro Colón , Buenos Aires. There were  35,000 Marplatans and tourists  who enjoyed a unique show.

The Plaza del Agua , the popular space that remains in Güemes y Roca, was the setting for the closing of the second edition of the Cultural and Environmental Awareness Cycle. Since the first days of January, the place had already become  a center of great shows.  This day was the closing with a gold clasp. In case there were doubts about this new Marplatense cycle, the numbers say it all : almost 400,000 souls  enjoyed these free shows. There were 58 days of activities, with 308 shows and 1518 artists on stage. Tremendous...

The presentation of Los Palmeras reviewed  all his hits , from “La chica de rojo” to the current sabalero hit, to the “Bombón assassin” and “La cola”. Separate paragraph for “La beast pop”: to the beat of  Los Redondos hit, people jumped, almost even doing pogo.

Always at the forefront

Los Palmeras had already risked mixing their  rhythms, so typical of the most  popular sectors of    Argentina, with the delicacy of the most popular sectors of Argentina.uacute; classical sica. And the experience proved quite a success. In 2017, and on the occasion of its 45 years, the ensemble had recorded a live album with the Santa Fe Philharmonic Orchestra. The material reflects a show held months ago on the coast of Santafesina. The amazing success was such that the live experience was repeated several times, and it came to its peak in March 2018, when they appeared to  80 thousand people in the  Obelisk  .

What is next in the race of these real monsters in Santa Fe is never known. What is certain is that, already  close to the 50 years of experience , they will not fail to surprise us and make us dance.