Home Argentine Music The Mudo spoke with the Voice

The myth of Carlos Gardel's meeting with Frank Sinatra in New York in January 1934 and Sinatra's posthumous homage at Abasto in August 1981. 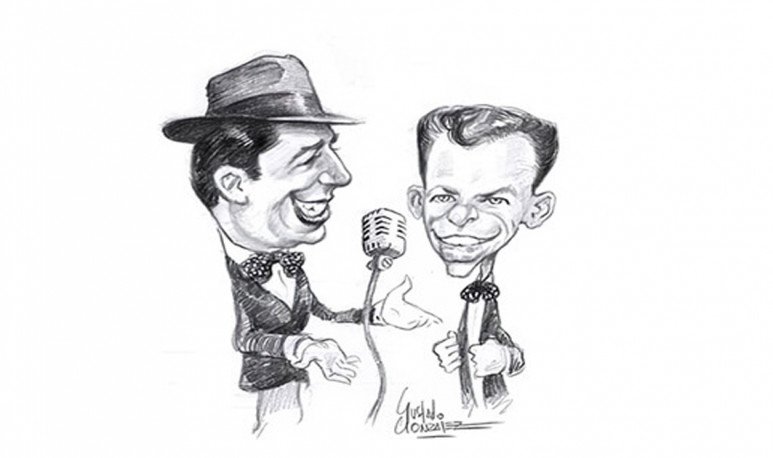 In the early morning of December 11, 1915,  Carlos Gardel  came out of a bowling in the immediate vicinity of the  Recoleta , in the company of a couple of friends. Along the way, they were rebuked and pursued by a “patota”

From among the group of stalkers a certain Roberto Guevara looked up and pointed to the heart of Gardel. Before he pulled the trigger, he sentenced, “You're not going to sing anymore.”

After the shot, the aggressors fled. The singer was lying on the cobblestones of the junction of Avenida Alvear with Agüero, while a red death circle grew on the left side of his chest.

They say that in those moments, when Gardel was dying in the hospital, his soul came out of the body. He flew in search of a shelter, so he could fulfill his mission.

This mission was to bring new music into this world. And that task was about to be unfinished: Gardel died without even having recorded a tango. The soul travels the world at light speed, and on the other end of the continent, in a poor neighborhood of New Jersey, finds accommodation in the body of a newborn, son of Italian immigrants, baptized Francis Albert, although a few years later everyone would know him as Frank Sinatra, alias “La Voz ”

“Thank you for helping me live”

It's a beautiful story, imagined around a real fact: Sinatra was born just when `The Mudo' was about to die. The addition of the soul traveling from one body to another is a poetic license, an ornament.

There is another legend that also links Gardel to Sinatra. However, in this case it is taken as true. It tells the story of how  El Mudo  spoke to La Voz.

Frank Sinatra was 18 years old. Get two tickets to watch the auditions Gardel is giving on NBC radio in New York on the occasion of New Year's holidays. At the end of the show, and with humility, Sinatra and his girlfriend Nancy, come to the singer to greet him. Nancy confesses to the artist that her boyfriend also wants to be a singer, but drags serious problems with alcohol and bad company.

So, Carlitos rests a hand on Frank's shoulder, and in a section, in an intimate tone, he says, “Look little, when I was your age I was walking in Buenos Aires as lost as you are now in New York. So soon, ragazzino, take advantage that you're here on the radio and sign up for a singers contest I think is called Major Bowes Amateur Hour. Do it ragazzino, that with proving nothing is lost.”

Following such advice, the boy goes to the competition organized by the NBC and wins the first prize! From then on, she will begin her career as an international star.

Already in his maturity, he made a tour of Buenos Aires and takes advantage of a long-postponed ritual. It reaches a corner of the Buenos Aires Abasto and deposits on the ground a yellowish radial entrance, from 1934. With a view raised to the sky, full of tears, he says these thrilled words: “Thanks for helping me to live, Mister Gardel.”

The story is so appealing - and also surrounded by a halo of credibility - that its dissemination became exponential, after it was published, for the first time, in June 2009, signed by a man named Ernesto Drangosch, the name of an Argentine virtuoso pianist and composer, who died in 1925, so we must assume that it is of a pseudonym. Gardel's semblance as a propeller of Sinatra's career was confirmed as authentic by some important political officials. And from that “official” endorsement, the media that echoed the news multiplied in several countries.

It's a shame that reality dismants a good story. Or so they say. And indeed, this is a beautiful story. Besides, very credible. It is based on a perfect combination of dates, scenarios, protagonists and circumstances. If it is an invention, a “fake”: how is it possible for events to encundo reality so accurately?

It is difficult to question its veracity. However, shortly after deepening, that apparent solidity of the plot begins to wobble and ends up crumbling. Let's see.

First, the publications that broadcast the rumor are limited to copying the original version in full...

We are asked that it was Nancy Barbato, Sinatra's first girlfriend and later wife, who confessed the anecdote. But we see that such statements never appeared in any review, book or journalistic interview.

Another fact, even more forceful, is that all Sinatra's biographies agree that his musical vocation was born in 1933, after attending a concert by the singer Bing Crosby, at NBC in New York.

Two years later he performed on the Major Bowes Amateur Hours radio program, with a group called The Hoboken Four, winning first prize and a radio contract for one year.

The conclusion is clear: the rumor would be distorting the presence of Sinatra and Nancy in the Bing Crosby recital, replacing Crosby by Carlos Gardel. What makes this change consistent, is that Crosby performed on the New York NBC in 1933, while Gardel performed on the same station between the end of that year and the beginning of the next.

I want to be Gardel

As we can see, Sinatra and Nancy attended a Bing Crosby recital, but there is no evidence that they witnessed one from Gardel, much less that they have engaged in a dialogue. in Italian?) On the contrary, what seems more logical is that whoever wrote this story has only replaced Crosby with Gardel and invent everything else.

Bing Crosby always declared, in private, his admiration for El Zorzal Criollo, of whom he owned a complete collection of records; he considered him the fifth best popular singer of all time, only behind Al Johnson, Tony Bennet, himself and Frank Sinatra. In the presence of Gardel's guitarists, Bing Crosby made the following comment: “The only thing I would ambition would be to sing for New York as Gardel sings for Buenos Aires.”

In 1935, Gardel and Crosby were summoned to participate in the Paramount film “The Big Broadcast”, which brought together the most prestigious voices of the radio.

Tomorrow at the Abasto

And, in addition, there is the addition of the ceremonial in the  Abasto . There you end up dismantling the legend.

It is difficult to believe that a twentieth century icon walked through overcrowded streets, alone or accompanied by an entourage of escorts, and that no one recognized him, especially considering that in 1981 his face was present in all Argentine news, magazines and newspapers. In addition to neighbors and escorts, there should be multiple other witnesses.

The dialogues are transcribed with great precision and detail, even after the prolonged silence. Who listened to and retained in their memory these details, with such exquisite thoroughness? Why did they shut up for almost three decades? And most unusual: why are they still anonymity today? What would prevent them now from giving their face and publicly recounting their testimony?

I don't have faith.

Ramón `Palito' Ortega is a bridge of union between the two characters. On the one hand, he joined a friendship with the American singer and was in charge of producing and organizing his tour in Argentina. On the other hand, he was the universal heir to the goods of Gardel's best friend - the jockey Irineo Leguisamo. Encouraged by Leguisamo, Palito began to investigate the life of El Morocho, to collect all kinds of unreleased objects, letters and discs, and to produce the documentary “El alma que canta”, in 1985.

Ortega has authority when he claims that Sinatra was an admirer of Gardel, but he never confessed to him that he had met him personally in New York, or that he paid him a tribute at the Abasto (tribute to which Palito would have attended immediately).

These are reasons that lead to confirming that we are facing a fable, which emerged from imagination.

In this case, beyond the hypothetical meeting in New York, or the homage in Abasto, there is a strong foundation: the artistic ties that link Sinatra with Gardel.

The two possessed a privileged combination of thorax, larynx and vocal cords that in the twentieth century only had Enrico Caruso, María Callas and few more. specialists, such as composer Enrique Cadícamo (“Gardel in Paris: his debut”, 1984), or tenor Josep Carreras (“I am a madman by Carlos Gardel”, El País, 21 April 2011) Also recalls the “Gardelian” style the anachronistic clothing that Sinatra wore: tilted hat, tuxedo, hairstyle at bay, sometimes with gomina. A hybrid between his admired Gardel and Crosby.

One of the arguments argued to avoid the imminent closure of Richmond confectionery is that Frank Sinatra wanted to visit it because he knew Carlos Gardel had sung there. A similar argument temporarily stopped the demolition of the  Casa Suiza building.

We can appreciate the complex and subtle task of the researcher, who must locate the correct sources of information, without discarding any beforehand, and corroborate whether they are free from arbitrary inventions or assumptions. So much or more worrying that spreading a false data is to discard an authentic one. Many researchers have lost valuable and irreplaceable clues for the mere fact of prejudging that they were false.